Ericsson, one of the companies set to be impacted the most if disaggregated mobile networks become globally popular, has made its first foray into the Open RAN sector with the launch of its Intelligent Automation Platform, a network management product that cleverly targets what is likely to be the prime need of the vast majority of mobile network operators – a single software stack that can introduce automated management processes into existing ‘traditional’ networks as well as Open RAN-based deployments.

The Intelligent Automation Platform is based on the O-RAN Alliance’s Service Management and Orchestration (SMO) framework specifications and is designed to manage multi-vendor networks that feature open interfaces, again as specified by the O-RAN Alliance, the operator-led industry body that is aiming to bring the modern equivalent of ‘standards’ to the Open RAN sector. It includes a Non Real-Time RAN Intelligent Controller (RIC) that runs rApps and a software development kit (SDK) that enables operators and third party developers to build feature applications (the rApps) that can run on the RIC (Ericsson has already developed some itself based on customer requirements).

“The Intelligent Automation Platform handles the orchestration of services and resources against demand,” notes Peo Lehto, Head of Solution Area OSS at Ericsson, in this instructive and detailed blog. “It provides the intelligence to manage conflicting demands and limited resources – it’s the brains of the operation. The SMO can take in multiple external data sources, such as location data, or weather data to create AI/ML driven models. Its ability to handle external data sources is one reason why we expect the automation applications, rApps, to be highly diverse.”

For further details, check out the vendor’s press release and the TelecomTV Strategy Outlook on Service Management and Orchestration that delves into the background of this launch and which also includes a deep dive into the product and a live panel discussion today (Tuesday 16th November) at 3pm UK/4pm CET that gives all registrants the chance to submit questions to the speakers.

The ‘manage any RAN’ approach is important. While some of the early headline-grabbing Open RAN deployments – think Rakuten Mobile, Dish Network and the upcoming 1&1 rollout in Germany – are greenfield networks built from the ground up to be compliant with the new architecture, most future wide area network Open RAN deployments are likely to be network extensions or additions by operators that already have ‘traditional’ deployments, and those operators won’t want to be running two management systems and trying to get them to interoperate – it would be an operational headache and financially unviable.

So with its new launch, Ericsson is playing to the global gallery of operators that, if they want to go down the road of Open RAN deployments, will want to be able to manage all of their RAN infrastructure using a single management system – the importance of that approach is highlighted by the supporting quotes from BT’s Chief Architect Neil McRae and KDDI’s Chief Director of Mobile Technology, Toshikazu Yokai, in today’s press release. In that sense, this foray into Open RAN makes sense for Ericsson, as it’s an extension of its existing business rather than a move that cannibalizes any existing product set.

And, of course, with this launch the vendor is also sending the message that it is not anti-Open RAN, something the vendor is continually stressing by highlighting its ongoing participation in O-RAN Alliance activities.

Of course, in the real world, Ericsson would rather Open RAN didn’t take off in any meaningful way, but there are growing signs that most operators will in one way or another, embrace the alternative approach to mobile network construction in one way or another, and Ericsson knows it’s better to be a player in the game rather than stick its head in the sand and hope it goes away: The Swedish vendor has long realized this, with CEO Börje Ekholm noting just over a year ago that spending on Open RAN systems was likely to impact revenues from 2023 onwards. (See Ericsson CEO sees Open RAN impact from 2023.)

With that all said, though, this is still a cautious toe in the water for the vendor, and its launch announcement hints, with phrases such as ‘functionalities in line with Open RAN principles’, at some potential grey areas.

So is the Intelligent Automation Platform a full-blooded Open RAN product, or a half-hearted effort that doesn’t go all the way? Santiago Rodriguez, Ericsson’s Head of Strategic Projects, says it’s very much the former.

“100%. It is compliant with the open interfaces – we are implementing the R1 [the interface between rApps and the Non Real-Time RIC], A1, O1, O2 interfaces, so it does follow the O-RAN principles and, at the end of the day, it’s an SMO, a Non Real-Time RIC platform,” says the Ericsson man. (See O-RAN Alliance logical architecture diagram below to put those interfaces into context.) 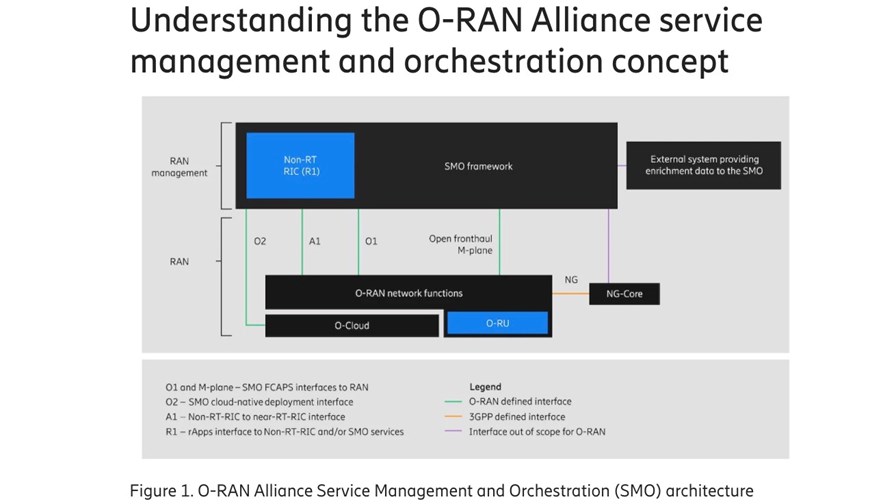 And how will it support the management of existing, traditional networks and enable the co-existence of already-deployed traditional systems and Open RAN sites within the same network, especially if the traditional systems are built using technology from other vendors such as Nokia, Samsung or NEC? This, says Riodriguez, will come via support for each RAN vendor’s element management systems (EMSs), the traditional OSS tools used to manage those systems, which sounds like the obvious way to go but also sounds somewhat tricky in terms of implementation, integration and maintaining the same functionality across the different systems.

Rodriguez admits this will involve a lot of integration effort up front, and that initially at least there will need to be a lot on integration effort even to get Open RAN elements working properly with the Intelligent Application Platform, as might be expected in what is still uncharted territory.

And once the management of hybrid (traditional + Open RAN) network architectures is actually happening in production networks, “we will be learning a lot as we mature. The way we are building the platform and the architecture, we're trying to abstract what's on the underlying layer so we can collect and normalise the data we collect and how we act on that network, no matter what vendor it is...  What is important as an application developer is that you have a much simpler view of what's going on... that abstraction layer will enable applications to work more seamlessly. Will it work 100% in all of the cases? I think we will need a bit of runtime to mature all of that, but I think over time we will get very close,” says Rodriguez.

And what about a Near Real-Time RIC? Is Ericsson also developing that Open RAN functionality?  Rodriguez said he “couldn’t speak about what we might develop in the future... there are a lot of things going on especially with our Cloud RAN and more things going on, but I can’t comment on those.”

In the meantime, the Ericsson team is focusing on maturing the Intelligent Application Platform so it can let network operators loose with the platform. “We expect to start having trials and co-creation innovation activities with our customers in the second half of next year,” says Rodriguez.

And Ericsson is also working with partners to build up the available set of rApps that can run on the Non Real-Time RIC – Infovista and Viavi are two of the companies currently engaged in such developments.

So it’s still very much early days for Ericsson’s foray into Open RAN territory, especially as it might be up to a year before the Intelligent Automation Platform finds its way into the hands of network operators, but it’s still a landmark day for the Swedish vendor as the move heralds a new era of alternative product development within the vendor’s four walls that starts to meet the needs of a disaggregated, open, multi-vendor future, however niche or widespread that might turn out to be.