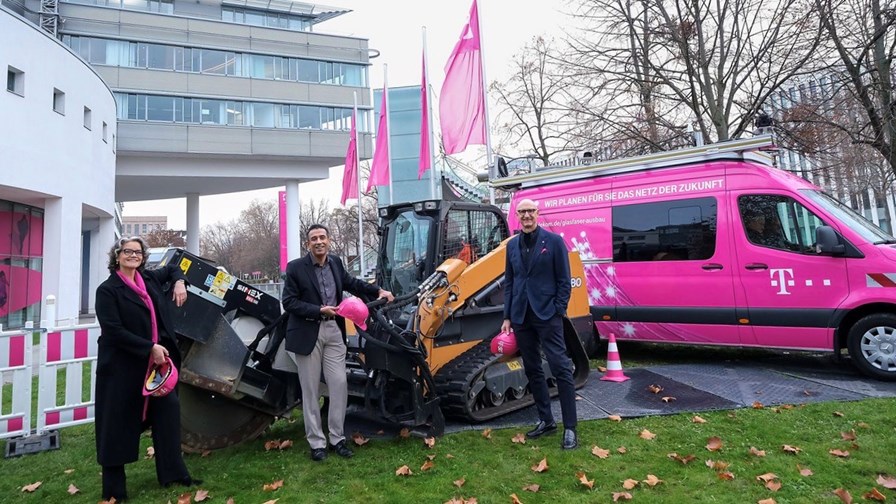 DT's Claudia Nemat (Board Member for Technology and Innovation), Srini Gopalan (Board member for Germany) and CEO Tim Höttges

Deutsche Telekom has committed to a small, targeted deployment of Open RAN technology in 2021, the company announced as part of an update on its mobile and fixed broadband network rollout plans.

The operator, one of the most vocal operator supporters of Open RAN, says it will undertake an initial deployment in Neubrandenburg, a town of about 65,000 residents north of Berlin, which it will refer to as “O-RAN-Town.”

It will deploy disaggregated radio access network equipment at 25 “O-RAN compatible sites” that will provide 4G and 5G services. DT says it is working with a range of tech partners on the development, including Dell, Fujitsu, NEC, Nokia, Mavenir and others.

"Open RAN has gained considerable momentum. The technical standards & interfaces aim at an open and fully interoperable RAN - for even better customer experiences in our networks. We are pleased to have strong partners," stated Claudia Nemat, Chief Technology Officer, who called out Nokia as a “strong European partner for our cooperation in O-RAN.”

But this isn’t set to lead to an explosion in Open RAN deployments across the DT network in the short term: This is just another step in the validation process as there is still much work to be done on Open RAN architectures and supporting technology elements, as Alex Choi, SVP of Technology Strategy & Innovation at the giant German operator, noted during his recent interview with TelecomTV as part of our Open RAN Summit. (See DT’s Alex Choi on Open RAN and the Evolution of Telecoms Architectures.)

He noted that it’s hard to assess the current status of overall Open RAN-compliant solutions in terms of their suitability for widescale commercial deployment, but noted that “my guess would be that we still need two to three years before ending up with a cost-efficient and carrier grade, full performance, massive MIMO-ready Open RAN solutions. Maybe some parts, besides the open fronthaul, may take more than three years to come up with a full blown solution.”

The key technical challenge is evolving cloud technologies so they are optimized for “licensed spectrum-based cellular radio resources” and to address challenges in the data transport networks, he noted, before adding that these challenges are addressable and that “an increasing number of developers” are working on the suitable solutions in bodies such as the O-RAN Alliance and Telecom Infra project (TIP).

Choi noted that, depending on the outcome of trials and lab tests, Deutsche Telekom has “the ambition to ensure Open RAN-compliant technology is ready for mass deployment in the brownfield environment by 2023 to 2024.”

Full speed ahead with 5G and FTTH

In the meantime, the operator continues to plough significant capex into its next gen access networks, it noted in this broad update on its network rollout plans.

Deutsche Telekom says about 45,000 of its mobile network antennas are now “fit for 5G” and about two thirds of Germany’s population (approximately 55 million of the country’s 83 million residents) can now access DT’s 5G service. That figure is set to rise to 80% of the population by the end of 2021 and 99% by 2025.

“On the high-reach 2.1 GHz frequency, high mobile bandwidths will be brought to rural areas in particular…. The 3.6 GHz frequency provides high-speed 5G where many people move around in a small area, such as in large cities. It is now also used at Frankfurt Airport. The technology will also be installed at Berlin's BER airport. New also are the 5G highspeed antennas in Bremen, Hanover and Nuremberg. This means that 13 major cities are already benefiting from 5G in gigabit speed,” it noted.

And expansion and upgrading will continue in 2021: “Old 3G antennas will become modern and fast with 5G. This means that all UMTS locations in Germany will be upgraded to 5G by mid-year. In the few places where the anchor frequencies do not permit this, LTE will be used. After all, when UMTS is switched off, Deutsche Telekom will have additional spectrum available on the 2.1 GHz frequency, which will then provide a boost for more speed. Overall, Deutsche Telekom wants to supply around 80% of the population with 5G by the end of 2021.”

The operator says it now offers FTTH service to around 2 million households, having run fibre to about 600,00 this year alone. That rate of rollout will increase to an extra 2 million premises per year from 2021, achievable due to new automated processes, technologies, cooperation agreements and investment conditions.

CEO Tim Höttges claims the operator is now a more willing partner: Deploying FTTH is “a task for society as a whole that we must tackle together. We too have learned our lesson and are focusing much more strongly on cooperation, especially with local suppliers.”

To meet those rollout targets and get appropriate services to customers, DT has created what it calls its Fiber Factory, which now has 13,000 staff.