NFV has been beneficial to telcos: Poll results 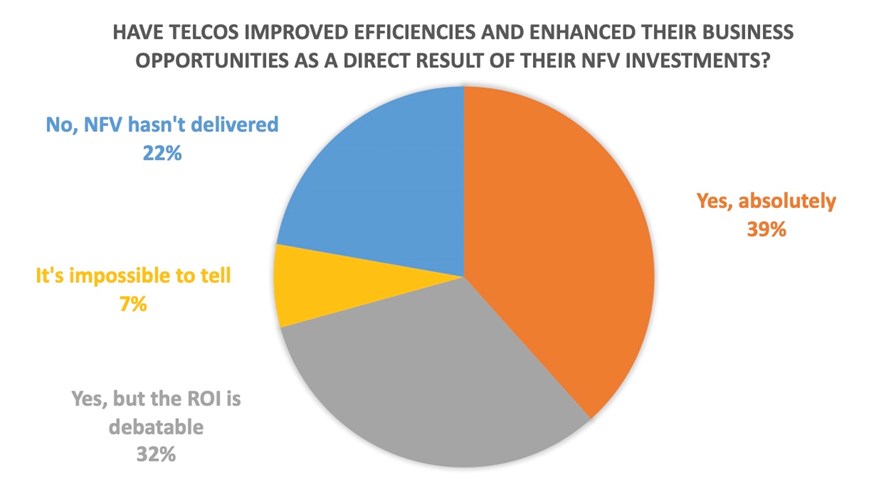 The implementation of NFV (network functions virtualization) capabilities has helped telecom operators improve efficiencies and spawned new business opportunities, according to the results of a poll run in the NFV group on LinkedIn.

But while 71% pf the 136 respondents were positive about NFV’s impact, almost half of those still question the overall return in investment (ROI) of NFV spending by operators, while 22% of voters believe NFV has failed to deliver on its promises.

As the custodian of the ‘NFV - Network Functions Virtualization’ group on LinkedIn, I ran the poll as part of the DSP Leaders NFV Evolution Summit program: The video interviews that comprised the bulk of the Summit’s content, and which includes an interview with Andrea Donà, Head of Network at Vodafone UK, can be accessed on the TelecomTV website. (See DSP Leaders NFV Evolution Summit)

Given that NFV first emerged as a concept more than seven years ago, and the road to telco virtualization has been somewhat rocky, it’s maybe a surprise that the results are so positive.

For example, of the 52 people who voted ‘Yes, absolutely’ to the question ‘Have telcos improved efficiencies and enhanced their business opportunities as a direct result of their NFV investments?’, only 10 work at telcos or cloud services companies -- most of the others who voted for this option work at a vendor or are technology developers/programmers.

Among the 44 who voted for the option ‘Yes, but the ROI is debatable’, just 8 were from telcos, cloud services companies or large enterprises.

Of the 30 that voted ‘No, NFV hasn’t delivered’, 8 work at telcos or cloud service providers, while one of the eight people that voted ‘It’s impossible to tell’ works at a telco.

It has been interesting to run the (rather simplified) poll and see the voting patterns, but while it’s hard to draw any clear conclusions from the results, it’s clear that NFV has, in general, not been regarded by many in the industry as a waste of time and effort: Certainly Andrea Donà believes NFV investments have paid off for Vodafone, while Joan Triay, who works at DOCOMO Euro-Labs and who is a Technical Manager at the ETSI NFV Industry Specification Group (ISG), believes there are plenty of benefits to come fro telcos from ongoing NFV developments. You can watch our NFV Evolution Summit interview with Triay right here.