Tablet market sees modest decline of 8.6% as slate and detachable categories continue to struggle, according to IDC

FRAMINGHAM, Mass., November 2, 2018 – The worldwide tablet market declined 8.6% during the third quarter of 2018 (3Q18) as global shipments fell to 36.4 million, according to preliminary data from the International Data Corporation (IDC) Worldwide Quarterly Tablet Tracker. Slate tablets accounted for the majority of the market with 31.6 million units, down 7.9% from the previous year. Detachable tablets also declined, down 13.1% from the previous year, to account for 4.8 million unit shipments. 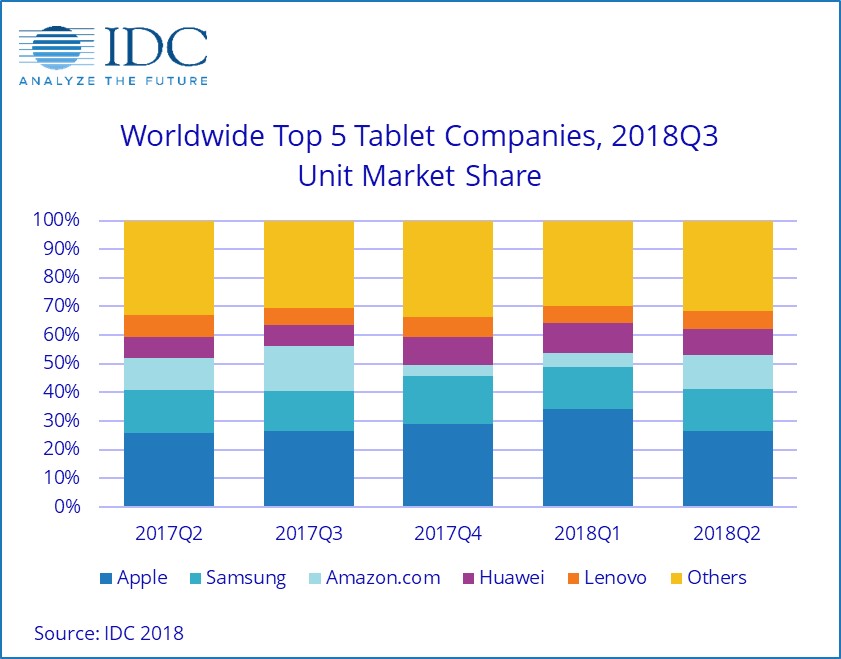 "The detachable market has failed to see growth in 2018, a worrying trend that has plagued the category off and on since the end of 2016," said Lauren Guenveur, senior research analyst for IDC's Tablet team. "In October we finally saw the highly anticipated refreshes of Apple's iPad Pro and Microsoft's Surface Pro, as well as new products by Samsung and Google, which lead us to believe that the last quarter of the year will turn the detachable category around, at least for the time being. Increasingly sparse are new products by the top-tier PC OEMs as they remain more focused on their convertible portfolio, a move that will ultimately affect the overall trajectory of the detachable market going forward."

"The tablet market is more like the traditional PC market than ever before," said Jitesh Ubrani, senior research analyst with IDC's Worldwide Quarterly Mobile Device Trackers. "Not only do these markets move in sync with each other, but the decreasing margins and overall decline, particularly in slate tablets, has led to the top 5 companies capturing a larger share as many small vendors have exited the space or simply treat the tablet market with a much lower priority. Even among the top 5, it is essentially Apple and to a lesser extent Samsung that continue to invest heavily in product innovation and marketing. This has helped the two companies to set themselves apart from the rest."

Apple continued to lead the tablet market with nearly double the shipments of its nearest competitor. The refreshed $329 iPad with Pencil support that launched in late March continued to drive volume although it was unable to maintain the same momentum from the third quarter of 2017 as that was the first time in a while that Apple had released a lower cost iPad. iPad Pro saw year-on-year declines in anticipation of a refresh at the beginning of the fourth quarter, which bodes well for Apple through the end of the year.

Samsung maintained its position as the second leading tablet manufacturer despite a year-on-year decline. Its detachable portfolio grew modestly, however that growth was outweighed by continued declines in the slate category. Samsung continues to face pressure in its lower and mid-market segments as competitors offer slate tablets at a better value.

Amazon.com rose in position to become the third largest tablet manufacturer in the third quarter. Strong sales from Prime Day propelled the company ahead of Huawei and Lenovo, a pattern we can expect will be repeated during the holiday quarter. Despite Amazon's rise in position, the company saw a modest year-on-year shipment decline.

Huawei was the only company among the top 5 to deliver year-over-year tablet shipments growth in 3Q18. Huawei continued its impressive growth trajectory in the quarter with strong year-on-year increases in Europe and Latin America.

Lenovo rounded out the top 5 with 2.3 million units shipped in the third quarter, a decline of nearly 25% compared to a year ago. The company has been heavily focused on expanding its reach in the traditional PC market and while it successfully regained the top position in that market, the company slipped into fifth place in the tablet market during the quarter.

** For year-on-year comparison, an extra line has been added below the table to show what Lenovo's growth would have looked like excluding Fujitsu volume in 3Q17.