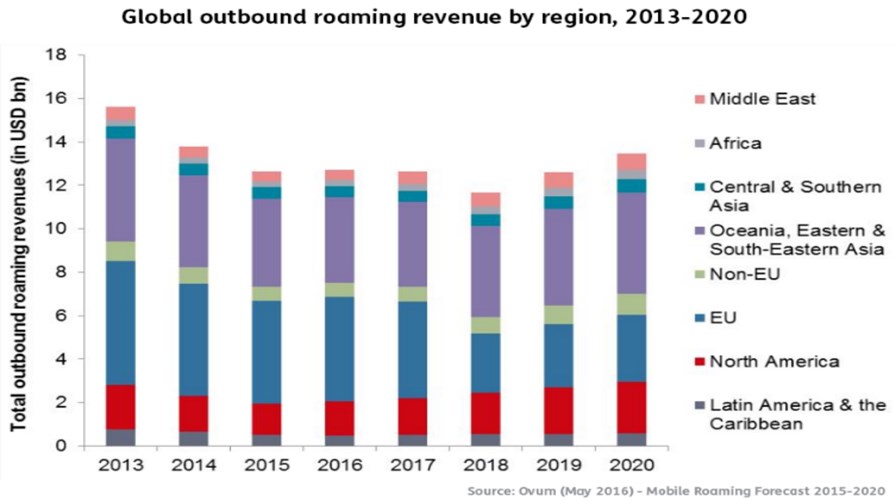 Ovum says it’s revamped its projections for global roaming revenues…  in an upwards direction. Much wailing and gnashing of teeth was heard when the European Commission finally stamped its foot and mandated the phasing down of  roaming charges (after several years of tinkering and persuasion) and the telcos in Europe prophesied imminent doom for the industry.

Surprise, surprise.  As it’s already turning out, nothing of the sort has, or is about to, happen. After a revenue slide to 2018 (see chart) the EU and the rest of the world  is expected to see its roaming revenue actually increase from a ‘reasonable’ base with  ‘outbound’ (retail) revenue growing at  a CAGR of 1.3%  between 2015 and 2020, says Ovum. This anticipated growth will be fuelled by Data roaming growth (CAGR 14.8%) that will more than offset the decline in Voice (CAGR -9.0%) and SMS (CAGR -20.2%), says Ovum.

The reason? Operators are coming up with sensible tariff structures for roamers, both business and residential, in place of bill-shocking per unit pricing.

The truth was that, regardless of telco propaganda, roaming revenues were under threat from prices which were too high and were causing both consumer and business customers to simply switch off their phones when out of territory. Users would then either take a nice holiday or business trip free of interruption from home, or periodically play hunt-the-WiFi to get and return their messages. Whichever, the end result wasn’t reduced revenues for telcos, but no revenues.

Ovum says outbound roaming revenues for EU operators are expected to bottom out in 2018, due to the implementation of the ‘zero roaming’ regulation, before it starts growing again in 2019.

And not just in Europe. The figures show that a new approach to roaming which majors on finding the roaming data tipping point  - where the cost of a day’s unlimited data (say) is mitigated by the hassle of having to hunt down a WiFi connection - is the way forward.

And Ovum believes that continued regulation on roaming in the global  market will only increase too. It points out that both the Eurasian Economic Union and Gulf Cooperation Council markets are already taking steps to cap, and eventually eliminate, roaming prices in a similar fashion to the EU.

According to the report’s co-authors Nicole McCormick and Dimitris Xydias, “Increasing roaming bundles availability, focus on data bundles and transparent pricing from the operators are key to unlocking the silent roamers. We believe operators are on the right track to tap this large potential source of revenues and increased customer loyalty.”

Now the problem operators face is in re-conditioning users to understand that roaming is no longer the shortest route to a depleted bank balance. That may still take some persuasion.