Worldwide wearables market ticks up 5.5% due to gains in emerging markets, says IDC

FRAMINGHAM, Mass., September 4, 2018 – Growth continued in the global wearables market during the second quarter of 2018 (2Q18) as shipment volume reached 27.9 million units, up 5.5% from the previous year according to data from the International Data Corporation (IDC) Worldwide Quarterly Wearable Device Tracker. The market experienced similar gains in dollar value, growing 8.3% year-over-year to $4.8 billion in 2Q18 fueled by the continued popularity of smartwatches with their high price tags.

From a regional perspective, mature markets – comprised of North America, Japan, and Western Europe – declined 6.3% year over year as these markets were largely comprised of basic wristbands last year, which have declined substantially since then and the growth in smartwatches has not been enough to offset the decline. Meanwhile, emerging markets, inclusive of Asia/Pacific (excluding Japan), Central & Eastern Europe, Middle East & Africa, and Latin America, grew 14% year over year as basic wristbands are still in high demand (due to the low price) and smartwatches also gained traction.

"The decline in mature markets is by no means worrisome as these markets are in the midst of transitioning to more sophisticated wearables," said Jitesh Ubrani senior research analyst for IDC Mobile Device Trackers. "While the previous generation of wearables was focused on providing descriptive feedback like step counts, the current and upcoming generations are far more capable and are well on track to becoming prescriptive and diagonistic tools. Surrounding these smarter wearables is a constellation of technologies and service providers that includes app developers, telcos, component makers, healthcare insitutuions and more – each poised for growth in the coming years."

"Two key forces were at work during the quarter: stronger demand for smart wearables, and slower declines in the basic wearables market," said Ramon T. Llamas, research director for IDC's Wearables team. "Users have come to want more from their wearable devices, and smart watches have met that demand. Additionally, relative newcomers to the smartwatch market like Fitbit and several Chinese vendors have seen steady growth.

"Basic wearables have been in decline over the past several quarters, but that does not mean that they no longer have a place in the market," added Llamas. "There still exists multiple market segments who prefer simple and inexpensive wearable devices and this is where wristworn fitness trackers and hybrid watches are finding demand."

Apple maintained its position atop the wearables market with market-beating growth and continued demand for its LTE-enabled Watch. This makes it a welcome addition to many telco channels worldwide. Now that the company has unveiled watchOS 5, it has also begun to chart out potential replacement cycles as the latest version of Apple’s smartwatch platform will be compatible only with Series 1 and later.

Xiaomi held the second position and has successfully diversified its product portfolio to include shoes, kid's watches, and multiple variants of the Mi Band, each priced at the low end of the market. The company also grew its brand awareness across Europe and the Middle East through the success of its smartphone lineup and other tech products and it is only a matter of time before this brand awareness leads to further success in wearables.

Fitbit's decline continued as the company largely relied on sales of basic wristbands in the past and was not able to maintain pace during the second quarter. However, with the launch of the Versa, the fitness giant has successfully expanded its userbase and emerged as the second largest smartwatch brand during the quarter with 1.1 million smartwatches shipped. Fitbit is also one of the few OEMs that continues to actively target the commercial market and remains a market leader in this space.

Huawei, like Xiaomi, has been heavily focused on the Chinese market though this is slowly changing as the company starts to experience growth outside its home turf. The dual brand strategy has also been paying off as Honor accounts for a little over half of all the wearables shipped by Huawei.

Garmin extended its lead over Samsung to maintain its position as the number five vendor worldwide and saw its shipment volume of smartwatches extend their lead over its basic wearables. This further underscores the growing appetite for smart wearables over basic wearables. Still, the company continues to benefit from the success of its fitness-oriented Vivo line and the launch of its new golf-centered Approach S10. 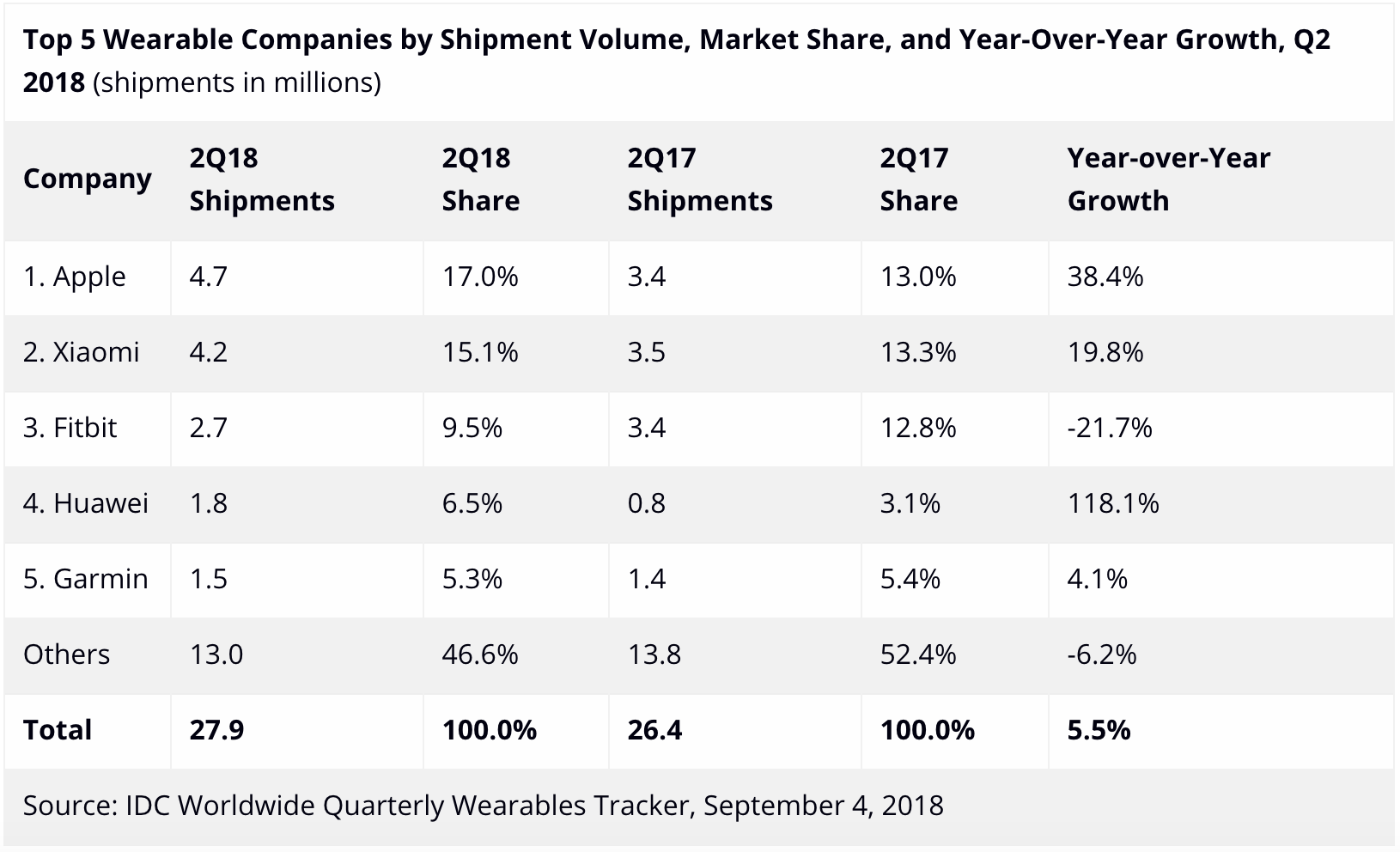 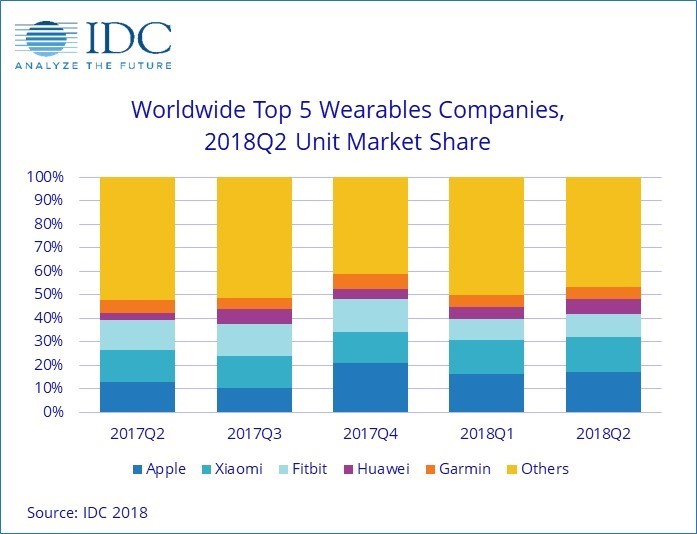