In the US, three of the four top carriers have grown tablet connections to nearly 10 percent of their subscriber base—still room for growth as Verizon Wireless points out, but a testament to their focus on tablet growth strategies and a contributor to lower churn. T-Mobile US CEO John Legere has called out Verizon’s tablet net adds on twitter, chiding his competitors for a lack of smartphone growth, but the now third ranked carrier would do well to amp up its tablet efforts and build on its innovative “comes with free data” and zero-rated music options to increase tablet subscriptions among its growing smartphone user base.

Key findings from the reports: 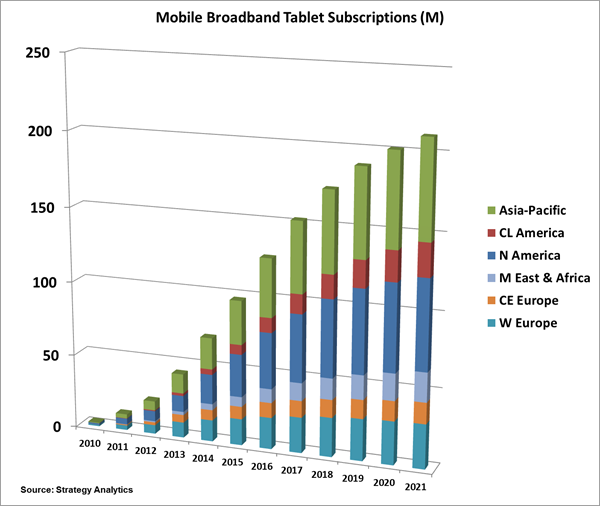 Susan Welsh de Grimaldo, Director, Wireless Operator Strategies said: “Tablets are not a one-size fits all device, and the best approach is targeted offers with device portfolio and service plans to address the needs of each segment, much as is done (or should be done) with handsets. Strategy Analytics recommends bundling content for enterprise and consumer segments as a next step to make purchase of a 3G or 4G tablet with service plan more compelling.”

Phil Kendall, Executive Director, Wireless Operator Strategies , commented: “We are seeing an increase in use of equipment installment plans (EIP) to lower the barriers for upfront purchase of a cellular-enabled tablet. In emerging markets, operator branded and other low cost tablets with good functionality, bundled with small initial or monthly free data allocations and targeted content are making tablets accessible to new users.”