"Strong application-related infrastructure and services requirements at the edge and core are continuing to complement significant cloud buildouts, keeping the demand side humming for network infrastructure," said Rohit Mehra, vice president, Network Infrastructure at IDC. "In parallel, connecting the edge to the core and cloud requires upgrades to WAN connectivity for which we continue to see increasing demand across enterprises as well as service providers, leveraging the architectural disruptions from areas like SD-WAN and mobile backhaul."

The worldwide enterprise and service provider router market grew 9.4% on a year-over-year basis in 3Q17 based on a strong 14.8% increase in the larger service provider segment and a 6.3% decrease in enterprise routing. This will be a market to watch closely over the coming quarters as software-defined architectures start to take hold across the WAN, with the potential for SD-WAN to disrupt traditional routing architectures and WAN transport services markets especially at the network edge.

Huawei continued to perform well in both the Ethernet switch and the router markets on an annual basis. Huawei's Ethernet switch revenue grew 14.1% year over year in 3Q17 for a market share of 7.7%, up from 7.2% in 3Q16. Huawei's enterprise and SP router revenue increased 44.0% over the same period to finish with 21.9% of the total router market in 3Q17 compared to 16.6% in 3Q16.

Arista Networks performed well in 3Q17 with its Ethernet switching revenue rising 49.6% year over year and earning a market share of 5.6%, up from 4.0% in 3Q16.

"Among the major regions, North America was the outlier this quarter with somewhat weaker growth, whereas some key countries and regions outdid the market with a significantly high growth uptake in the switch and router segments respectively," said Petr Jirovsky, research manager, Worldwide Networking Trackers. "There are opportunities for emerging OEM and ODM vendors to gain share while challenging more established vendors to rethink how they compete." 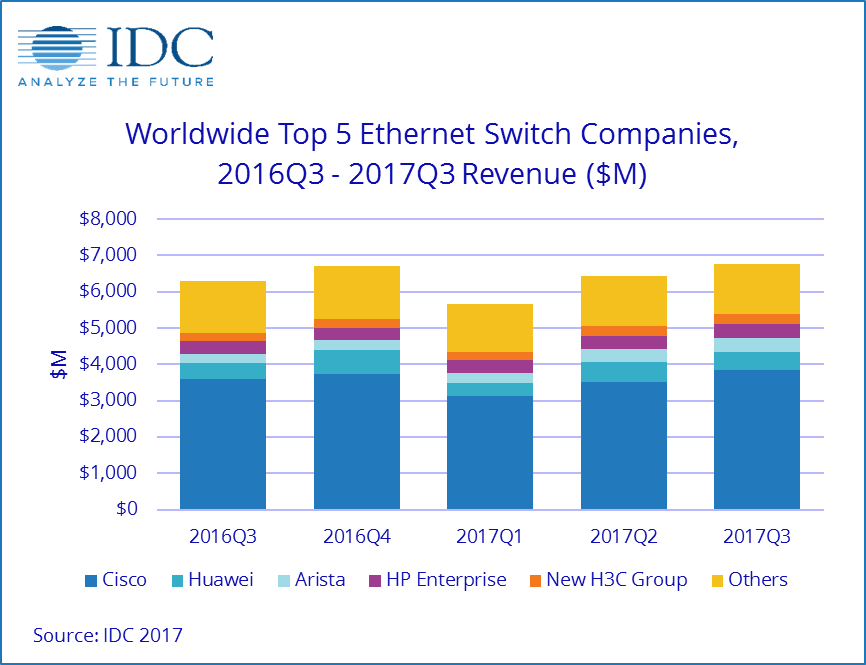