Details of this technology were announced at the European Conference on Optical Communication 2017, an international conference held in Gothenburg, Sweden on September 17-21. 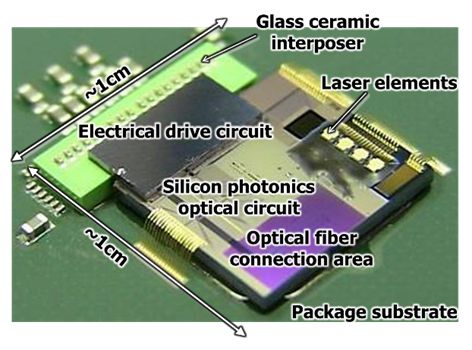 To accommodate the digital transformation associated with such technologies as AI and IoT, the scale of systems connecting multiple processors is being increased to improve the performance and efficiency of existing server systems. Accordingly, the expansion of data transmission capacity within server systems has become a major challenge. Because there are limits to data transmission using existing electric circuits, however, there are high expectations for methods that transmit data using light. Specifically, methods which aim to increase capacity for the system as a whole by employing multiple optical elements and multiple electric circuits to drive them are being actively studied (Figure 2). In light of this background, PETRA, Fujitsu Limited and Fujitsu Laboratories Ltd. came together for the "Integrated Photonics-Electronics Convergence System Technology" joint research as part of the NEDO project, developing high density, miniature optical transmitter technology, as well as high speed, low power transmitter technologies, with the goal of expanding data transmission capacity.

Now, Fujitsu, NEDO and PETRA have developed silicon photonics(1) optical transceiver technology with the world's highest density. With a chip size of about 1 cm squared which can be mounted on a processor package, the technology operates at 400Gbps, with 25Gbps across 16 channels (Figure 1). In addition, to accelerate the speed of the new optical transceiver, the organizations have also developed the PAM4(2) optical transmitter technology, which can transmit at the high speed of 56Gbps per channel with a reduced power consumption of 1.6mW per 1Gbps, a reduction of 40% over previous technology.

It is necessary to incorporate laser elements as a light source for optical circuits. However, it was difficult to simply form them into one circuit, because the structure of the terminal was different from that for connecting the electrical drive circuits. Now, by using a method called "lift-off(4) " to form the laser element mounting terminal, PETRA has established a technique for forming these two types of terminals on silicon photonics, creating a new optical circuit terminal structure for optical transceivers. In addition, the organizations have arranged the structure of the optical circuit in such a way that the laser elements, electrical drive circuits, and the optical fibers connected to the components that handle the input/output of optical signals will not interfere with one another, achieving high capacity in a minimal chip size. 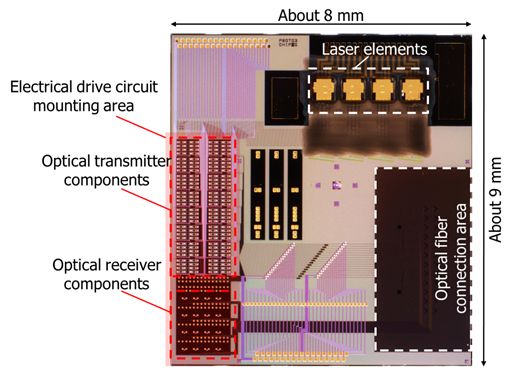 In order to create high density optical transceivers, it is necessary to connect numerous input/output pathways for electrical signals and their power supplies in such a way that they do not interfere with one another. PETRA had previously developed a mounting structure in which a two-dimensional array of high density terminals were connected to the electrical drive circuit through a glass-ceramic interposer that could relay high speed and high density electrical signals, while the electrical drive circuit forms a bridge connecting the glass-ceramic interposer with the silicon photonics optical circuit (Figure 4). This has now been applied to optical transceivers for the first time, enabling the high quality and high density delivery of both the electrical signal and the power supply. The organizations also controlled to minimize the degradation in receiver performance due to electrical interference between the transmitter and receiver components of the optical circuit by implementing a shield structure between them, controlling electrical interference. They also improved power supply quality by reducing noise through the arrangement of the circuitry within the glass-ceramic interposer, utilizing the high circuitry density which is a feature of the bridge mounting structure. 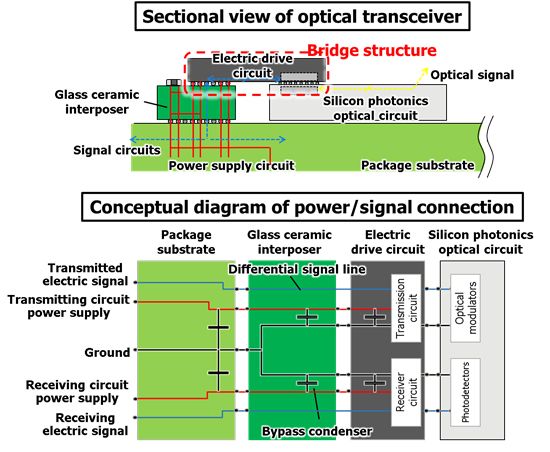 In addition, to further accelerate the newly developed optical transceiver technology, the organizations have simultaneously developed the PAM4 optical transmitter technology, which uses the method of controlling the transceiver with the pulse amplitude modulation of four levels of voltage value to perform transmissions of high-speed optical signals of 56Gbps with a reduced power consumption of 1.6mW per 1Gbps, a reduction of 40% over previous technology (Figures 5). PETRA had been developing optical transmitters with a frequency equalizer made up of passive elements that do not consume power. Now, by directly connecting the electrical circuit driving the optical transmitter to the silicon photonics optical circuit through a solder bump, the circuit's load impedance has been reduced, enabling high speed operation with lower power consumption (Figure 6, 7). 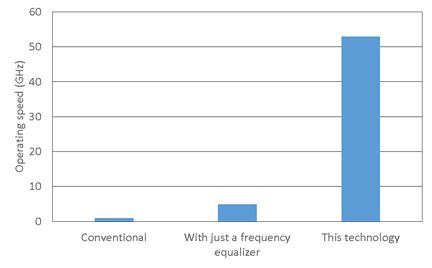 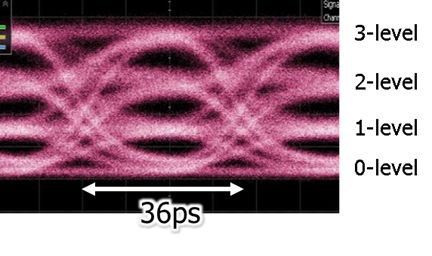 Following the two oil crises of the 1970s, the need for energy diversification increased. Against this backdrop, the New Energy and Industrial Technology Development Organization (NEDO) was established as a governmental organization in 1980 to promote the development and introduction of new energy technologies. Research and development of industrial technology was later added, and today NEDO is active in a wide variety of areas as one of the largest public research and development management organizations in Japan.