Fujitsu Laboratories Ltd. today announced that it has collaborated with the University of Toronto to develop a new computing architecture to tackle a range of real-world issues by solving combinatorial optimization problems(1) , which involve finding the best combination of elements out of an enormous set of element combinations. This architecture employs conventional semiconductor technology with flexible circuit configurations to allow it to handle a broader range of problems than current quantum computing(2) can manage. In addition, multiple computation circuits can be run in parallel to perform the optimization computations, enabling scalability in terms of problem size and processing speed. Fujitsu Laboratories implemented a prototype of the architecture using FPGAs(3) for the basic optimization circuit, which is the minimum constituent element of the architecture, and found the architecture capable of performing computations some 10,000 times faster than a conventional computer.

Through this architecture, Fujitsu Laboratories is enabling faster solutions to computationally intensive combinatorial optimization problems, such as how to streamline distribution, improve post-disaster recovery plans, formulate economic policy, and optimize investment portfolios. It will also make possible the development of new ICT services that support swift and optimal decision-making in such areas as social policy and business, which involve complex intertwined elements.

In society, people need to make difficult decisions under such constraints as limited time and manpower. Examples of such decisions include determining procedures for disaster recovery, optimizing an investment portfolio, and formulating economic policy. These kinds of decision-making problems--in which many elements are considered and evaluated, and the best combination of them needs to be chosen--are called combinatorial optimization problems. With combinatorial optimization problems, as the number of elements involved increases, the number of possible combinations increases exponentially, so in order to solve these problems quickly enough to be of any practical utility for society, there needs to be a dramatic increase in computing performance. The miniaturization that has supported the improvements in computing performance over the last 50 years is nearing its limits (Figure 1), and it is hoped that devices will emerge based on completely different physical principles, such as quantum computers. 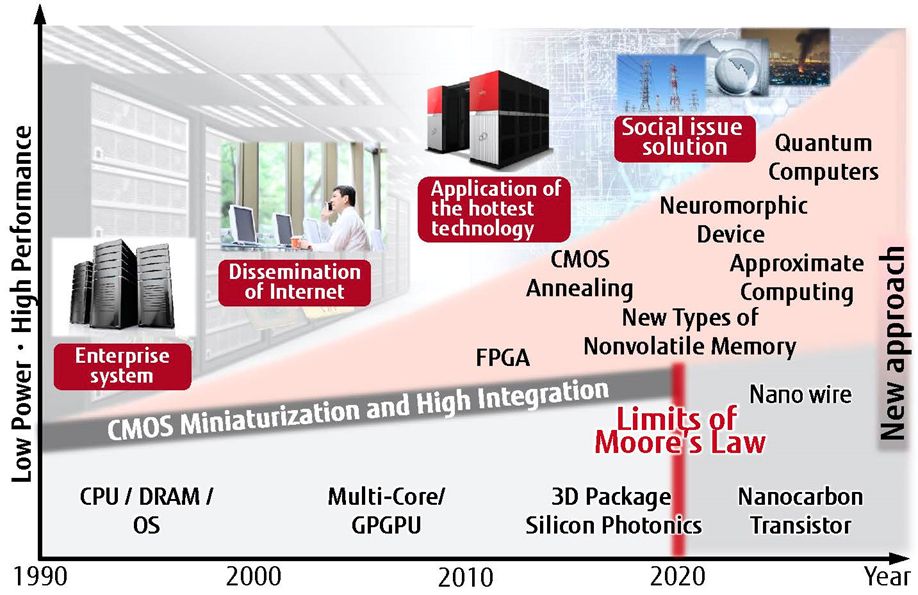 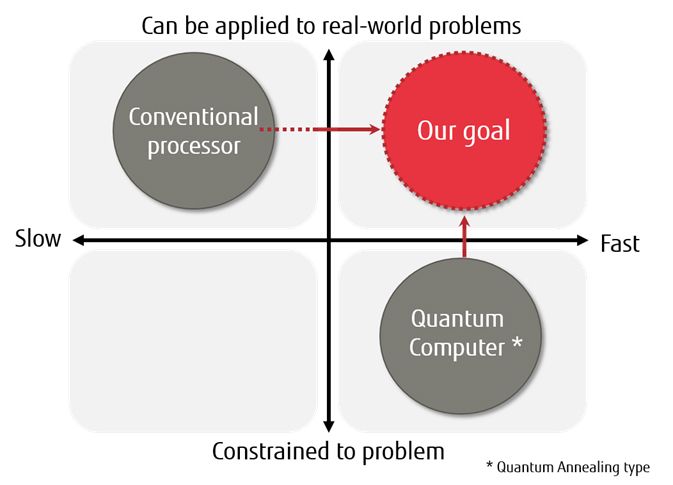 Using conventional semiconductors, Fujitsu Laboratories developed a new computing architecture able to quickly solve combinatorial optimization problems. This technology can handle a greater diversity of problems than quantum computing, and owing to its use of parallelization, the size of problems it can accommodate and its processing speed can be increased. Key features of the technology are as follows.

The basic optimization circuit uses techniques from probability theory to repeatedly search for paths from a given state to a more optimal state. This includes a technique that calculates scores for the respective evaluation results of multiple candidates at once, and in parallel, when there are multiple candidates for the next state, which increases the probability of finding the next state (Figure 4, left). It also includes a technique that, when a search process becomes stuck as it arrives at what is called a "local minimum," it detects this state and facilitates the transition to the next state by repeatedly adding a constant to score values that increases the probability of escaping from that state (Figure 4, right). As a result, one can quickly expect an optimal answer. 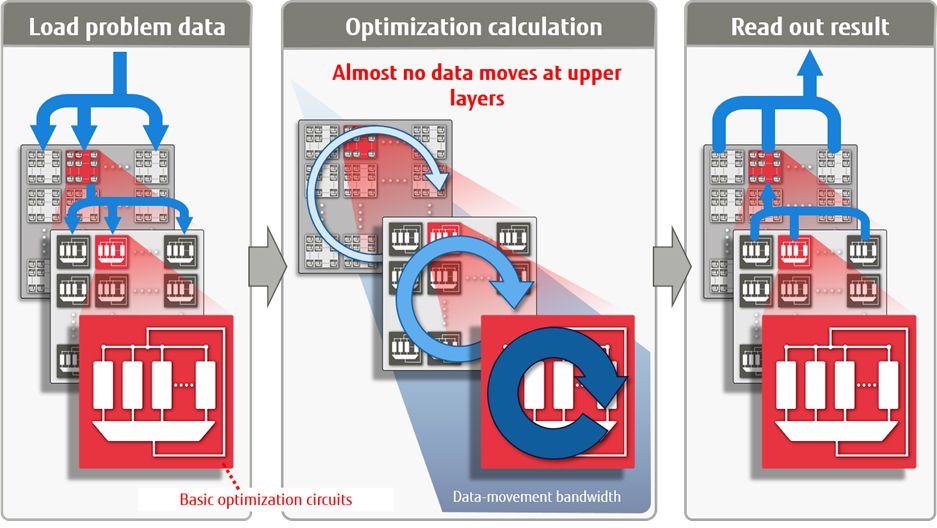 Fujitsu Laboratories implemented the basic optimization circuits using an FPGA to handle combinations that can be expressed as 1,024 bits, and found that this architecture was able to solve problems some 10,000 times faster than conventional processors running a conventional software process called "simulated annealing." By expanding the bit scale of this technology, it can be used to quickly solve computationally intensive combinatorial optimization problems, such as optimizing distribution to several thousand locations, optimizing the profit from multiple projects with a limited budget, or optimizing investment portfolios. It can also be expected to bring about the development of new ICT services that support optimal decision-making at high speed.

Fujitsu Laboratories is continuing to work on improving the architecture, and, by fiscal 2018, aims to have prototype computational systems able to handle real-world problems of 100,000 bits to one million bits that it will validate on the path toward practical implementation.

A class of problems that involves finding the minimum evaluation score for a combination of elements (such as policies, etc.).

A computing technology that takes advantage of quantum phenomena. A technique called “quantum annealing” has been developed to handle combinatorial optimization problems.

Field-programmable gate array. A general purpose device with a circuit layout that can be programmed after manufacture.