The UK has become a nation of binge viewers, Ofcom research reveals, with eight in ten adults now watching multiple episodes of their favourite shows in a single sitting.

The findings are part of Ofcom’s annual Communications Market Report 2017, which reveals stark differences in how older and younger people watch television.[1]

Eight in ten adults in the UK (79%) – or 40 million people – use catch-up technology such as BBC iPlayer, or subscription services such as Netflix, to watch multiple episodes of a series in one sitting, wiping out the wait for next week’s instalment. One third (35%) do so every week, and more than half (55%) do it monthly.[2]

Most binge viewers (70%) find this type of viewing relaxing and enjoyable, and for others it’s an opportunity to discuss with friends (24%). But around a third (32%) of adults admit the temptation to watch another episode has cost them sleep and left them feeling tired.

Perhaps as a result, more than a third (35%) of binge viewers, and almost half (47%) of young adults aged 16-24 are trying to cut down their viewing in some way. This includes rationing their viewing (19%), finding an alternative hobby (10%), or even cancelling a TV subscription (4%).

Binge viewing has such a strong allure that many viewers say they don’t intend to do it, but the pull of the next episode keeps them tuned in. More than seven in ten (74%) say they sometimes watch more than they intend to, while 18% say this always happens.

Bingeing is most popular among young people: more than half (53%) of those aged 12-15 enjoy weekly watch-a-thons, compared to just 16% of over-65s. For that older age group, more than half (59%) prefer a traditional release of one episode per week.

The trend has been driven, in part, by the availability of faster home internet speeds, a rise in the number of connected TVs, and increased take-up of smartphones and tablets.[3] 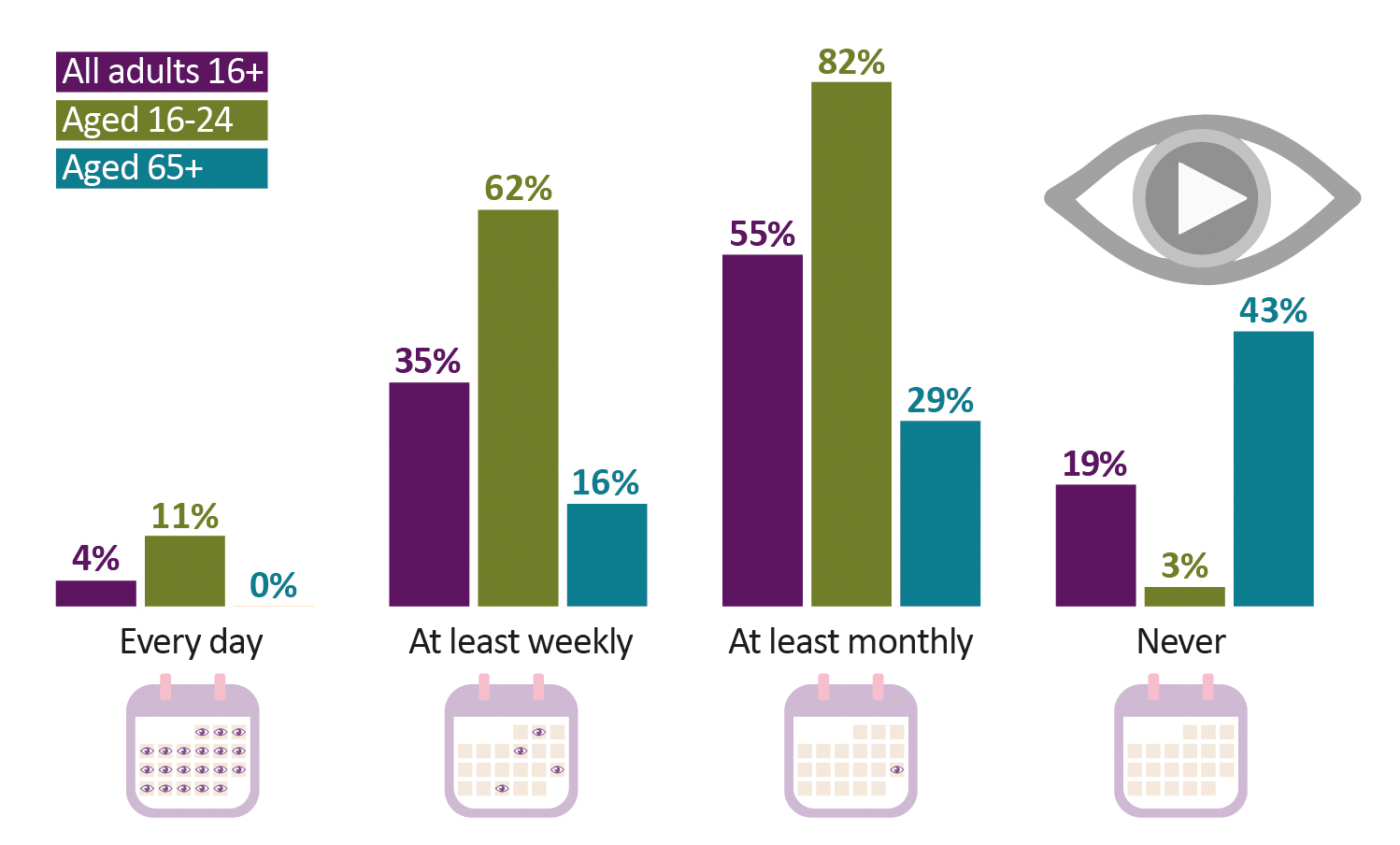 For many binge viewers, the desire to keep up with programmes is driven by fear of someone spoiling a programme’s ending (25%). This can result in some (16%) feeling under pressure to keep up with the viewing habits of family or friends.[4]

And for some, the days of being tied to the TV schedule are fading, as UK viewers take advantage of being able to watch whenever, wherever they like. More than a third of people watch TV on the move – while on holiday (24%), while commuting (16%) or even in the pub (7%). 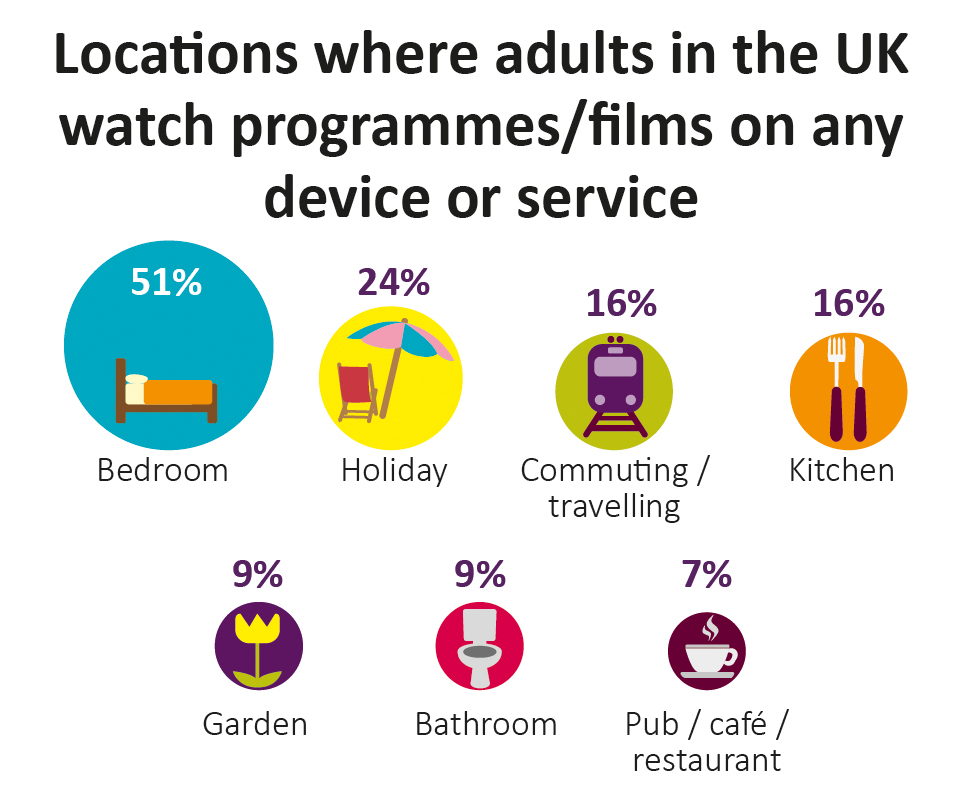 For many, watching TV is now a solo activity. Two in five adults say they watch TV alone every day, and almost nine in ten watch programmes alone at least once a week. One third of people say members of their household sit together, in the same room, watching different programmes on separate screens.[5]

Despite this, nine in ten people watch live TV every week, and family viewing is still an integral part of family life. Three in ten (30%) adults say their family still watches the same programmes or films together every day, while 70% do so at least once a week. Nearly seven in ten (68%) say watching TV can bring the whole family together for a shared viewing experience.[6]

Ofcom’s research also reveals differences between the viewing habits of older and younger people, with the latter far more likely to take advantage of streaming services such as Amazon Prime.

More than seven in ten (76%) young people aged 16-24 use a subscription streaming service, compared to less than two in ten (19%) older people aged 65 and over. 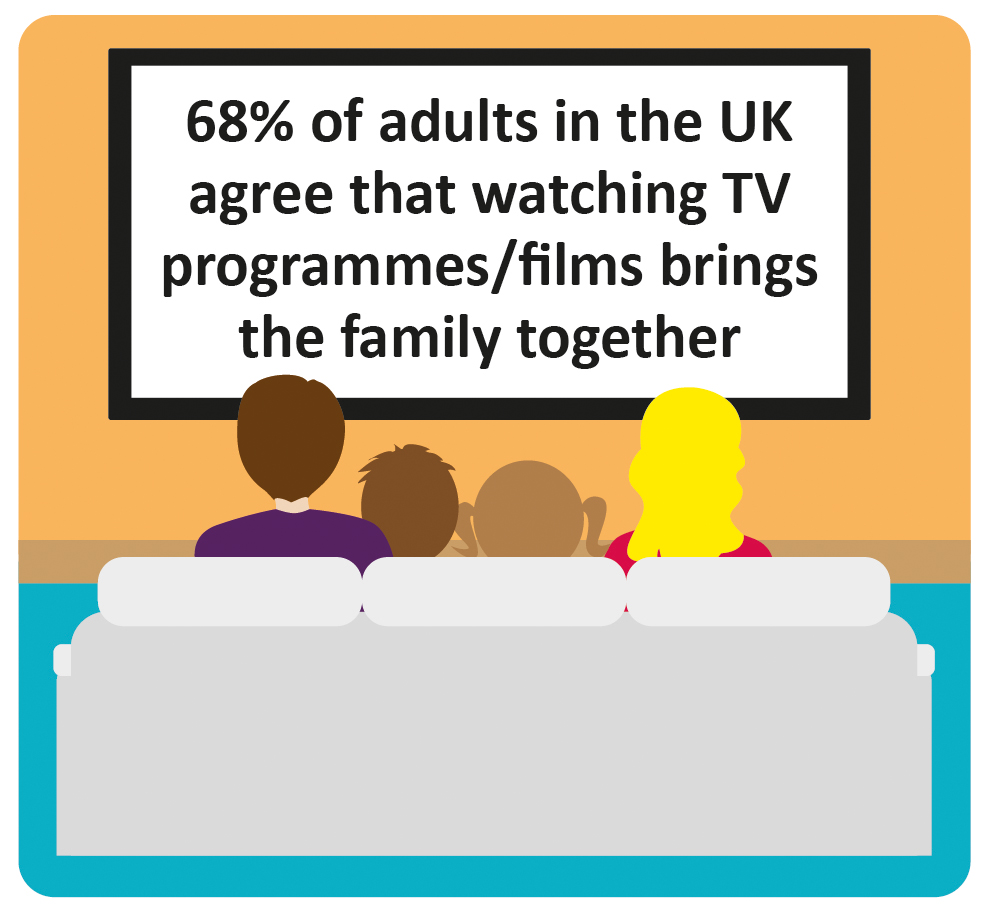 However, BBC iPlayer is the most popular on-demand service with 63% of adults saying they use it, followed by ITV Hub at 40% and then YouTube at 38% and Netflix at 31%.

The public service broadcasters’ on-demand services, such as All 4 and ITV Hub, are popular with all age groups – 75% of young adults aged 16-24s, and 59% of over-65s, use these services.

Lindsey Fussell, Consumer Group Director at Ofcom, said: “Technology has revolutionised the way we watch TV. The days of waiting a week for the next episode are largely gone, with people finding it hard to resist watching multiple episodes around the house or on the move.

“But live television still has a special draw, and the power to bring the whole family together in a common experience.”

This year’s Communications Market Report also examines our online habits – looking particularly at the sharing of images, and wide differences in people’s approach to online privacy.[7]

It reveals that more than half (56%) of parents don’t indulge in ‘sharenting’, the common practice of sharing pictures of children on social media. Among those who do not share, the main reason (87%) is a wish to keep their children’s lives private.

In contrast, 42% of parents do share photos of their children, and half of these share photos at least once a month.

Understanding the privacy implications of sharing images is a critical media literacy skill, and some people are aware that, once they post an image, they no longer have control over it.

Half of people understand that an uploaded photo is difficult to delete because it may have been shared or saved by someone else, but 17% think it is easy to delete, and a further 16% didn’t know.

Older people are far less confident about using privacy settings than younger internet users. The large majority (81%) of 18-24s feel comfortable changing settings, but this falls to 37% of over-55s.

Most people are aware of other people’s privacy, with seven in ten (70%) saying they wouldn’t share photos of other people without their permission, and three-quarters saying that personal images should only be shared with friends or followers.

And six in ten (62%) people who post photos of themselves (‘selfies’) say they have ‘untagged’ themselves from someone else’s photos or videos of them.

Younger people are more relaxed about sharing photos. Almost two in ten (18%) people aged 18-24 don’t mind sharing with everyone, compared to just 5% of people over 35.

The power of self-image

But among the wider population, holidays are still the most popular online snaps (24%). Almost three-quarters (74%) are cynical about the photos that other people post. Seven in ten say other people’s photos offer a ‘rose-tinted’ view of that person, or make their life appear more exciting than it is. This view is strikingly high among younger people – 85% of 18-24s, and 88% of 25-34s, agree with it, compared to only 65% of over-55s.

Unfortunately, despite knowing that these photos might not be realistic, viewing these photos can have a negative impact. One third (32%) say looking at other people’s photos makes them feel that their life doesn’t match up, rising to more than half (53%) of 18-24s.