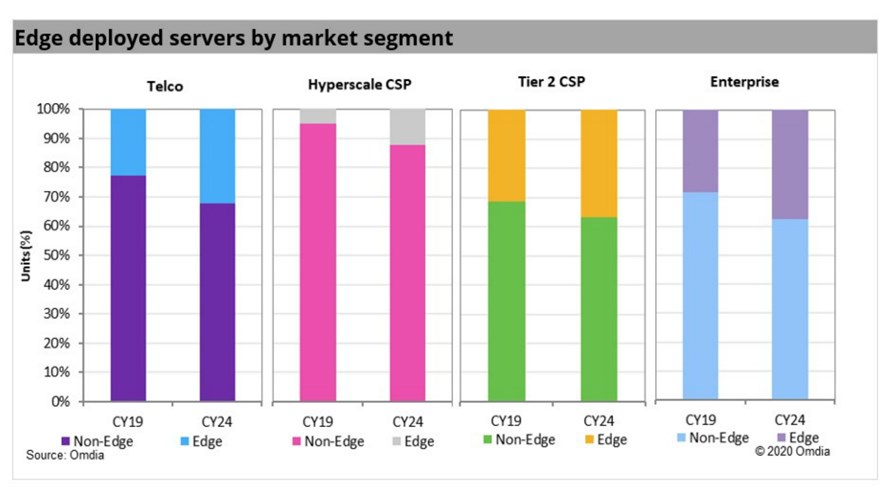 According to analysts Omdia, the number of servers deployed at edge locations will double over the next 5 years, and a total of 4.7 million servers shipped in 2024 will be located at the edge. No surprises there, although...

a mere doubling in that time might be less than the edge hype had led most of us to expect.

In fact, Omdia’s figures seem to argue slightly against that ‘transforming’ rush to the edge that we keep hearing about, partly because the edge (defined as locations with a max round trip time to end-user devices of 20ms) seems to be pretty crowded already.

For example, Omdia finds that “32.2 per cent of servers shipped to telcos in 2024 will be deployed at edge locations, up from 22.8 percent in 2019.” Put another way nearly a quarter of deployed servers go to the edge today and in five years' time nearly a third will do so.

It points out a large portion of the servers telcos have deployed at the edge so far are used for content delivery networks (CDNs).

And what are the hyperscalers up to? Pretty much business as usual. Omdia expects 12.2 per cent of servers shipped to hyperscale cloud service providers and to be deployed at edge locations will climb from 5 per cent in 2019 up to 12 per cent in 2024.

OK, that’s a doubling. But these edge percentages are very low in both years (see chart above). Just keep in mind that 88 per cent of the hyperscale servers are still being shipped in 2024 to pack out the hyperscale data centers.

So the hyperscalers do not appear to be rushing to the edge, but then neither are the other categories of edge player. Even the enterprise market is going to be making a slight change in emphasis rather than executing some sort of 180 degree handbrake turn.

This is not to say that the edge as a means of smartening up latency, managing streamed video, supporting new and demanding applications and intercepting IoT traffic going back the other way won’t continue to be a major driver for infrastructure investment. It clearly will, as Omdia points out, and for all the reasons we already understand.

For telcos, many edge located server deployments will be justified by cost savings achieved by virtualizing network functions, followed by revenue-bearing new services.

Maybe you already knew there was a lot of hype about - there always is and sometimes it’s fully warranted - but careful consideration of the numbers projected above might help put the edge hype into some sort of perspective.