Kawasaki, Japan -- Fujitsu Laboratories Ltd. today announced the development of technology to accelerate virtual routers, which play a major role in the functionality of networks in virtual environments.

Server virtualization, which concentrates multiple applications and the infrastructure functionality of network processing in a general-purpose server environment, is spreading beyond datacenters to the field of edge computing, including wireless base stations and Mobile Edge Computing (MEC)(1) . The technology also proves useful in areas including societal infrastructure with applications like traffic management, and in entertainment, where it can be used to deliver viewers content like sporting events. As data volumes increase and systems become increasingly complex, however, the CPU resources required for packet processing in a virtual network increase. This reduces the number of applications that can run on a single server, and leads to lower server aggregation rates.

To resolve this issue, Fujitsu Laboratories has now developed technology to accelerate packet address control, which had been a performance bottleneck, while also offloading the processing of router functions in the virtual network to field programmable gate arrays (FPGAs)(2) . This speeds up packet processing performance eighteen-fold compared with existing virtual routers, while reducing the use of CPU resources to about one thirteenth that of existing technology.

With this technology, Fujitsu Laboratories will deliver high performance virtual networks with a low computational burden, supporting the digital transformation of companies by improving server utilization efficiency for businesses that will use large volumes of data in the 5G era.

Server virtualization, which concentrates multiple applications and network processing functionality using a virtual environment on a general-purpose server, is becoming increasingly common and widespread as digital transformation progresses. Moreover, by accelerating digital transformation within a wide variety of companies, new services are also being created that link applications together. Against this background, the volumes of data handled by these applications is trending upwards, leading to issues of increasing network complexity and increased computational burdens.

As networks grow increasingly complex and computational burdens increase, issues have arisen with improving packet processing performance in the virtual routers that are essential to flexible network structures, as well as with reducing the CPU resources used for network processing, in the effort to deliver efficient server virtualization. By resolving these issues, it will become possible to increase the number of applications that can run on a server, as well as decrease the number of servers needed for a system, reducing investment costs for customers.

Fujitsu Laboratories has now developed technology to offload the burden of virtual router functionality from the CPU to FPGAs, alongside technology to increase the speed of packet addressing control. This will not only increase network performance, but will also significantly reduce the CPU resources used for network processing.

With this technology, packet sequence information is stored separately from the packets in the pipeline. Consequently, in address search processing spread over multiple stages, when the results of an earlier search render subsequent searches unnecessary and a packet bypasses those searches, it can be rapidly recombined with the other packets in the pipeline in the proper order based on the packet pipeline sequence information. Combined with the pipeline duplication, this technique reduces memory access while maintaining high pipeline processing speeds. These technologies improve packet processing performance. 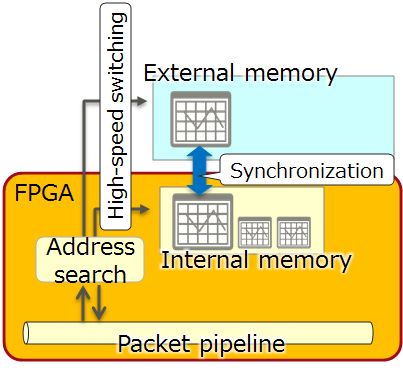 An evaluation of the effects of this offloading on a general-purpose server was conducted using this technology, which was deployed on Intel® Stratix® 10 MX FPGA featuring high-speed HBM2(3) memory using Tungsten FabricTM , an exemplary open-source virtual router. Two servers connected with 100Gbps ethernet ran four virtual machines each, and communications were conducted between each virtual machine to test the performance of the virtual routers. The results showed that packet processing performance, which was 13.8Mpps using existing methods, was increased to 250Mpps, or about an 18-fold increase. In addition, the number of CPU cores used was reduced from 13 cores to 1 core.

Using this technology, it is now possible to increase application server density. This will support the digital transformation of customers from the foundational level, improving server utilization efficiency in infrastructure business areas that use large volumes of data in the 5G era, particularly in base stations and MEC for carrier businesses, such as, for example, making it possible to operate a video distribution service for a stadium with fewer servers.

Fujitsu Laboratories will continue to improve the performance and expand the functionality of this technology, as well as conducting further evaluations based on customer digital transformation use cases, with the goal of commercialization during fiscal 2021.

Technology primarily used in mobile communications networks that delivers reduced latency and a more distributed burden for core networks by conducting data processing using servers and storage distributed to locations such as base stations.

Field programmable gate arrays are large-scale semiconductor devices for which logic circuits can be rewritten.

The memory that is built into the same package as the FPGAs which is capable of transfer data at high-speed and high-capacity.