There’s no doubt that Data Centre Interconnect (DCI) is increasingly important, driven by the steady growth and importance of ‘the cloud’. That’s the macro trend. But there are two trends within cloud-growth that are, or soon will be, putting a rocket under DCI.

The traditional data centre was pretty-much a closed environment with data swishing around within its boundaries - a query would come in and a data response would go out - that was about it. But that situation has long-since changed dramatically with the increasing role of ‘hybrid’ or multi-cloud solutions; along with the expected data centre rush to the ‘edge’.

The cloud environment is now reliant on a growing ability to continually shunt huge amounts of data between data centres, not just facilities at near range, but data centres or edge facilities thousands of miles apart.

As a result many tech vendors are majoring on DCI-oriented transmission technologies driven by the usual imperatives of lower cost, more efficient transmission, lower power requirement and more efficient management. Companies such as Huawei, Cienna, are all touting their DCI capabilities with mentions of AI, simplicity and agility increasingly cropping up, at least in the marketing literature.

Equinix says its objective is to help enterprises seamlessly connect to their clouds and network partners but implies that what sets the Equinix offer apart is its ECX Fabric, which it claims gives “businesses the agility to maximise on changing market conditions and new opportunities,” by allowing them to quickly connect to ecosystems of clouds, networks and partners, including clouds not currently available for direct connection within a local market.” This is familiar stuff if you’ve been following the NFV/cloud scene, but it may also indicate that a differentiated DCI service provider model may be emerging in a DCI field that has previously fixated on faster/cheaper point solutions.

Nokia Bell Labs, for instance, explains that instead of connecting a few distant central data centers, cloud providers are now having to connect dozens of distributed data centers in a single city in order to meet the fast response times and low latencies required of new edge computing services.

So it’s been setting out its stall around the idea that edge data centres need the sorts of speeds enabled for long haul data transmission with the complication that “many of the most advanced optical technologies today are designed to optimally transmit data over 10,000km, not the 80km or less typically separating edge data centers.”  It makes a case that the trad approach may be extremely powerful but it also tends to be very complex and power hungry and can’t meet both the operational needs and cost efficiencies needed to service the edge cloud.

That means a new type of optical system has to reproduce the capacity of long-haul systems without their complexity, and do it at lower cost and with less power thirst.

Bell Labs claims it’s accomplished that by jamming as much information as possible onto a single wavelength of light, the result being that while most data centre interconnects support speeds of 400 Gbps per wavelength, with adapted long-haul systems, one fiber optic cable could support the transmission of roughly 45 channels using wavelength division multiplexing (in the C-band), which has resulted in an eye-watering 18 terabits per second transmitted over a single fiber strand using today’s commercial solutions, it claims.

But the issue here is that such a configuration would place huge demands on digital signal processing, power consumption and WDM capabilities, driving up costs - not optimal for DCI applications. 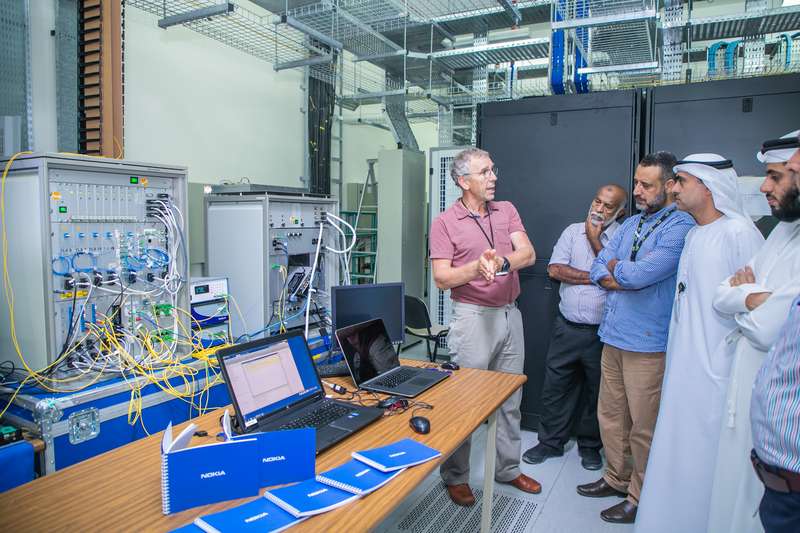 Bell Labs claims that to connect these edge computing hubs, the industry needs to transmit fewer wavelengths over a single fiber while maximizing the capacity over each of those channels. To do so it must look toward efficient ‘coherent’ technologies and simplified integrated transponders

According to a post penned by Bell Labs’ research team leader, Fred Buchali, the company has, in conjunction with Micram Microelctronic, developed converters enabling data rates of over 1 Tbps on a single wavelength and has tested the technology with Etisalat’s production network in the United Arab Emirates cranking throughput up to 1.52 Tbps.

It says this research is particularly meaningful for future cloud connectivity with the innovation focus shifting from maximizing the number of channels, to maximizing the efficiency of each channel. The objective is not just to get faster speeds but to reduce transponders and lower WDM requirements with less digital signal processing, simplifying the systems and coming in at lower cost - a necessity to support distributed data centre architectures.

One question we have is whether over time, specialised DCI technology will lead to specialist carrier business models focusing on sophisticated and software-driven DCI fabrics. And who will end up utilising them - telcos, cloud providers, enterprises or a new breed of carrier. Answers on a lightwave.