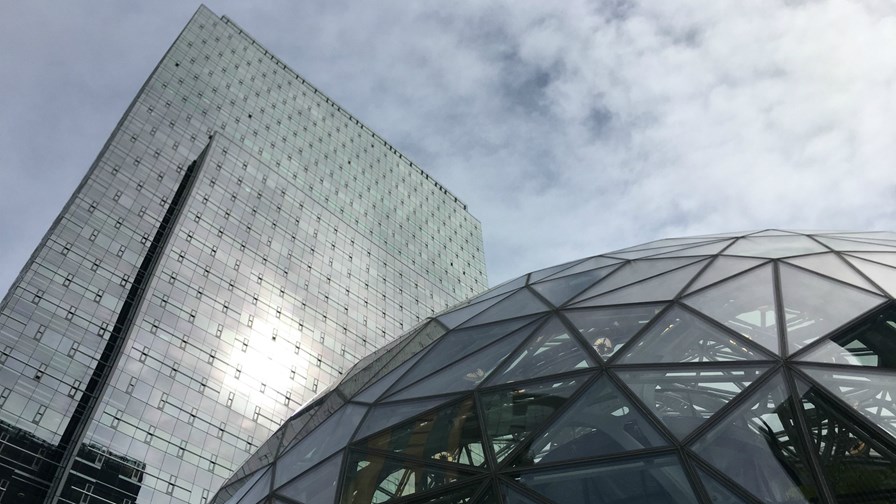 A real mix of news tidbits today as Jeff Bezos' 'shout out' programme gets a fair old shout back and we dwell on home security, ARPU expectations in India and the US “Bureau of Cyberspace and Digital Policy"

Shouting-out for Amazon censorship. Amazon, mankind’s greatest invention and universal boon to humanity, never tires of telling anyone who will listen just how enlightened its employment policies and practices are and how every single worker delights in the generosity of the pay they get and the relentless pressure they are under every single moment of every over-surveilled Stakhanovite shift they work for the man, even though some employees, (or “hourly associates” as they are called in the land of Bezos) are markedly less enthusiastic about the way they are treated. As Amazon employees in the US inch closer to forming a union to negotiate with the juggernaut of Amazon management from a position of collective strength, the company is considering the introduction of a sort of in-house social networking “chat app” to allow employees to “Shout-Out” in admiring recognition of the ever-improving performance of their co-workers. Dave Clark, the head of worldwide consumer business at Amazon says the new programme will reduce employee attrition (ie., churn rate which can be up to 150 per cent per annum at some Amazon sites) by “fostering happiness among workers”. And, purely incidentally of course, “increase productivity” and so “add direct business value.” As reported by the news portal and investigative journalism website “The Intercept”, Amazon apparatchiks and an “auto bad word monitor” will “block and flag” (in other words, censor) “keywords”. Among them will be: union, compensation, pay rise, bullying, petition, ethics, fairness, living wage, slave, freedom, robots and even ‘vaccine’ and, more bizarrely still, ‘restrooms’. Whatever you do, don’t mention the lavatories! The Intercept had sight of an internal Amazon document stating, “With free text, we risk people writing Shout-Outs that generate negative sentiments among the viewers and the receivers. We want to lean towards being restrictive on the content that can be posted to prevent a negative associate experience.” There’s that weasel word “lean” again. What Amazon plans to do is not “leaning” towards anything, it’s straightforward centrally-imposed coercive censorship. After ‘The Intercept’ ran the story, an Amazon spokesperson, Barbara Agrait, issued a statement saying, “Our teams are always thinking about new ways to help employees engage with each other. This particular program has not been approved yet and may change significantly or even never launch at all.” Hmm. By the way, The Intercept has also seen a copy of Amazon’s “Employee Handbook” for 2022. It states that full-time Amazon employees are required to be on-call for at least one (compulsory) overtime shift a week. The non-salaried (for which read “hourly associates) get time and a half for the overtime that are required to work, while salaried employees “don’t qualify for extra pay”.

At least one North American Tier-1 mobile operator appears to be heading for 5G and Wi-Fi convergence (see - TelecomTV Network convergence: 2022’s big talking point). Swedish telecom software specialist Enea says it has signed a three-year agreement for 5G core network applications and Wi-Fi Service management solutions with a mystery North American Tier-1 mobile network operator. Enea will provide an intelligent 5G APN assignment application and a 5G Standalone mediation function for all subscribers in the customer’s mobile network, it says, and will  also provide a security gateway authentication function for the customer’s small cell network as well as a solution for secure nationwide and high-capacity stadium Wi-Fi services. The new 5G and Wi-Fi contract shows the strength of our product offering and is a clear proof-point of new business through synergies in sales,” says Jan Häglund, President and CEO of Enea. The agreement, which covers new business with an existing customer, includes software licenses, professional services, as well as support and maintenance. Software licenses corresponding to a value of USD 2.8 million are booked in the first quarter of 2022, while remaining revenues are recognized over the full contract period. The total deal value amounts to US$5.1 million.

Securing the home: ETSI says it has developed a new cyber security specification for Home Gateways. It’s called ETSI TS 103 848 and was developed by the ETSI CYBER Technical Committee. ETSI says the new spec was an adaptation of  its security standard for securing consumer IoT devices - EN 303 645. In true ETSI style the CYBER  technical Committee is careful not to hype up its latest output. “While a secure home gateway does not remove the need for strong security of local devices connected to the gateway, it can provide protection against vulnerability for legacy devices or for those devices that cannot otherwise be secured,” says Alex Leadbeater, Chair of the ETSI CYBER TC.

Meanwhile, at the other end of the self-promotion  spectrum… No sooner had Elon Musk finished preening himself over his boardroom arrival at Twitter (following his purchase of around 9 per cent of its shares), than a French court stepped in and annulled the licence that had been  granted to his Starlink low earth orbit (LEO) satellite system in February 2021. That had given Starlink two radio frequencies to deliver satellite Internet access on French territory. The Conseil d'Etat court said it had revoked the licence after two activist groups appealed regulator Arcep's decision to grant them on the basis that the award had not been subject to public hearings. The decision to grant the licences to Starlink "could impact the market for high-bandwidth internet and affect the interests of end users," explained the Conseil d'Etat. So far there’s been no intemperate outburst from Musk which probably indicates that Starlink will play the game and appeal nicely first…

Still up in space…  or rather down on the launch pad, and the billionaire rivalry between Musk and Bezos rages on.  Multiple news outlets report that Starlink rival, Amazon, is preparing up to 83 launches having secured rocket time for its LEO Project Kuiper from Arianespace, Blue Origin and United Launch Alliance. Amazon claims the three launch agreements comprise the largest commercial procurement of launch vehicles in history and should result in a constellation of 3,236 satellites.

They’re in the money! Three of India’s biggest mobile operators are boasting to the media that they expect to report impressive figures for Q4, 2021/2022. The details will be published officially soon but self-congratulatory leaks from Reliance Jio, Bharti Airtel and Vodafone Idea are tee-ing up the markets and the media for some good news. Words is that Jio and Baharti will post much improved average revenue per user (ARPU) figures, in the range of 10 per cent growth. Even struggling Vodafone Idea is indicating that it will report a quarter-on-quarter improved ARPU of 5.5 per cent. Now, you might think that the enhanced figures are a sign of increased subscriber numbers and the attraction of new technologies, services and apps. However, the reality is that the sudden spurt in revenue growth is basically down to one simple fact: tariffs rose by up to 25 per cent at the end of 2021 and the effects will be very apparent in the Q4 figures.

Wynken, Blinkin and Nod. France is infamous for its byzantine bureaucracies, as are India and elsewhere. It’s not for nothing that Charles Dickens satirised British bureaucracy in his 1857 novel “Little Dorrit”, with his invention of the “Circumlocution Office”, the epitome of official procrastination. Nothing much has changed since. The US too has a monumental bureaucracy which is as pervasive, powerful and Kafka-esque as it is sluggish and lumbering. And now it is to be enlarged by the creation of the “Bureau of Cyberspace and Digital Policy.” US Secretary of State, Anthony Blinkin, says the new department will usher in “a new focus in US foreign and domestic security by incorporating emerging technologies into policy decisions. He adds, “On cyberspace and emerging technologies, we have a major stake in shaping the digital revolution…We want to shape the standards that govern new technology.” To effect this, the State Department wants a 50 per cent uplift in its IT budget, a “more sophisticated data strategy” and lots of new civil servants who will be open to “new insights, new information, new ways of working.” That’ll be a first. As US poet Eugene Field wrote in 1889, “Wynken, Blynken, and Nod one night, Sailed off in a wooden shoe, - Sailed on a river of crystal light, Into a sea of dew. "Where are you going, and what do you wish?”, The old moon asked the three. “We have come to fish for the herring-fish. That live in this beautiful sea; Nets of silver and gold have we," Said Wynken Blynken, And Nod.” Change the line “into a sea of dew” for “into a sea of glue” put the verse put to music and have it sung by the new Bureau’s staff every morning as they do their corporate calisthenics. Now that’ll be a morale booster.

Long live the mainframe: You don’t hear too much about banks making full-scale journeys into the cloud.  That’s because they tend to keep all their critical workloads humming away on the descendants of their original mainframe computers - mostly IBM ones. Every now and again, though,  IBM announces a new generation of mainframe computer and pops in some innovation. The latest is called the IBM z16: it supports Real-time AI for Transaction Processing at Scale and the Industry's First Quantum-Safe System. It also features an integrated ‘on-chip’ AI accelerator. According to IBM, today's modern IBM mainframe is central to hybrid cloud environments, valued by two thirds of the Fortune 100, 45 of the world's top 50 banks, 8 of the top 10 insurers, 7 of the top 10 global retailers and 8 out of the top 10 telcos as a highly secured platform for running their most mission critical workloads. More information on IBM’s hybrid approach with mainframes can be found here.