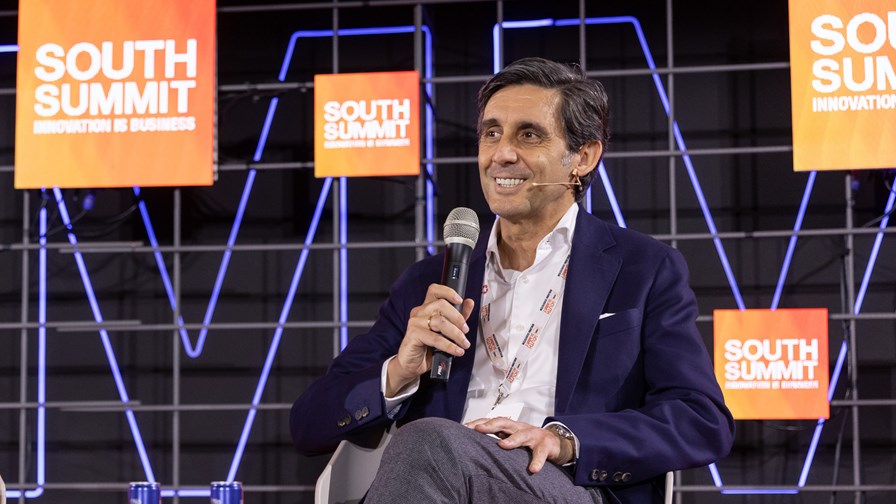 José María Álvarez-Pallete, Chairman and CEO of Telefónica, talking at the South Summit

Talk of innovation breeding grounds, a new CEO for one of the UK's many competitive FTTH network builders, and a shot in the arm for comms networks in Central America are at the front of today's news queue.

Telefónica’s chairman and CEO, José María Álvarez-Pallete, has taken to the stage at the South Summit, an annual gathering of investors, entrepreneurs and startups in Madrid, to promote the telecoms sector as a breeding ground of exciting new digital developments. He stated that Telefónica “works to ensure that innovation finds its breeding ground in telecommunications networks,” and noted how the telco is opening up its APIs to application developers and supporting startups through its Wayra programme, which has been nurturing digital startups in multiple European and Latin American locations for more than 10 years and which has just announced its first investment in a US-based startup. He also highlighted the upcoming likely impact of the metaverse, noting that it will “be the most profound change the Internet has undergone since its birth… Now it is time to give a concrete purpose to all this technology, because it is people who give meaning to technology and not the other way around,” noted the Telefónica boss. Innovation in the telecoms sector was one of the key discussions during the recent in-person DSP Leaders World Forum event in Windsor, UK, with BT’s chief architect Neil McRae highlighting the need for more support for startups and Diego Lopez, senior technology expert at Telefónica, stressing the need for telcos to be more involved in all aspects of the innovation cycle if they are to maximise their opportunities. For more on what Álvarez-Pallete had to say, see this press release.

Competitive UK fibre broadband network operator G.Network has appointed Kevin Murphy, the former managing director for Fibre and Network Delivery at BT’s quasi-autonomous fixed access network unit Openreach, as its new CEO, starting 4 July. He replaces Sasho Veselinski, who stepped down last month for personal reasons. At Openreach, Murphy led a team of more than 12,500 engineers building out the incumbent’s fibre access network, so he has plenty of relevant experience for G.Network, which is focusing its rollout in London and has passed almost 400,000 residential and business premises to date with its fibre access network.

Millicom (operating under the Tigo brand) unveiled plans to invest $700m into maintaining and expanding its fixed and mobile broadband networks in Central America. Its commitment will see investments being injected into its operations in Guatemala, Honduras and El Salvador over the next two years. The move comes as a response to a call to action from US vice president Kamala Harris, in a bid to accelerate economic growth in these markets through enhanced connectivity. Penetration rates for broadband in the three countries are still below average levels in the region – with only 30% to 40% of households having access to reliable broadband at home. Read more here.

A study by BT has identified that UK students are unaware of opportunities to pursue educational courses and a career path in artificial intelligence (AI). In its AI skills: motivation and AI careers myths debunked report, the UK telco found that 59% of higher education students were unaware of AI courses when choosing their field of study and more than half of those surveyed said they would consider choosing an AI-related course after they had received more information about it. A significant number of higher education students (38%) perceived a career in AI as “dull”, while 42% believed such qualifications were not necessary for the careers they were interested in. On the flip side, two-thirds thought the AI industry attracts ambitious people, while 73% believe it to be a career that would give them the opportunity to solve problems. Given that BT issued the report, it shows commitment to boosting data, AI and digital skills in its domestic market through various initiatives. The global AI industry is expected to be worth £49bn in 2022.

All electronic devices to be sold in the European Union from 2024 will be required to have the same charging port, the European Commission announced on Tuesday following a provisional political agreement between the European parliament and EU member states. “As of 2024, all new handheld mobile phones, tablets, digital cameras, handheld video game consoles, headphones, headsets, portable speakers, e-readers, keyboards, mice, portable navigation systems, and earbuds will have to be equipped with a USB-C charging port,” the commission announced, though laptops will not have to conform until 2026.  “No more bundles of different chargers in our drawers,” stated Margrethe Vestager, executive vice president of the commission’s strategy A Europe fit for the Digital Age. “One common charger is a real benefit to us as consumers. It will also help our environment,” she added. According to the EU, about 420 million mobile phones and other portable electronic devices were sold in the region in 2020, but due to incompatible charging solutions, more than a third of consumers experienced problems and, because of those issues, spend approximately €2.4bn per year on additional standalone chargers. In addition, discarded and unused chargers are estimated to account for some 11,000 tonnes of e-waste every year. The device vendor most affected is Apple, which still uses proprietary Lightning charging technology for its iPhones and some other devices.

Noovle, the cloud unit of Telecom Italia (TIM), has teamed up with Salesforce to offer cloud-based customer relationship management (CRM) solutions to enterprise and government customers.

Deutsche Telekom is enhancing its rural 5G coverage by using its 700 MHz spectrum assets for the service: More than 3,000 antennas are being used to transmit 5G connectivity via the band. The German operator says the reach of the 5G signal using 700 MHz is between 5km and 10km outdoors, depending on the terrain, while the spectrum also has the potential to provide better indoor coverage for 5G services. Until now, DT has been using its 2.1 GHz and 3.6 GHz spectrum for its 5G service offerings. Read more.

The wireless LAN (WLAN) product sector was hit hard by the ongoing components shortage in the first quarter of this year and the problem is set to persist during the current three-month trading period due to the impact of the Covid-19 lockdowns in China, according to research house Dell’Oro Group. “Several US-based WLAN manufacturers announced that backlogs approached ten-to-fifteen times higher than normal,” noted the company. “Many enterprises have planned network upgrades and the popular connection is Wi-Fi. The trouble is getting it. Several manufacturers announced that components from second and third-tier suppliers became the bottleneck in 1Q22,” noted Tam Dell’Oro, founder, CEO and WLAN analyst. “Supply constraints have resulted in highly volatile quarterly performance vendor-to-vendor depending on whether or not they have all the components. For example, sales may be up 20% in one quarter and down 20% the next. Another item, which could potentially cause delays, that we are keeping our eye on, are the contract negotiations between the west coast dockworkers union and the Maritime Association,” added Dell’Oro. Read more.

Nokia has landed a 10-year extension to its current mobile infrastructure contract with Orange Polska that covers 50% of the operator’s network in northern Poland and will run until 2036. The deal will enable “the modernisation of the operator’s existing radio network infrastructure as well as enhance its 5G capabilities,” and will include the supply of 5G Massive MIMO antennas for multiple deployment scenarios, noted Nokia in this announcement.