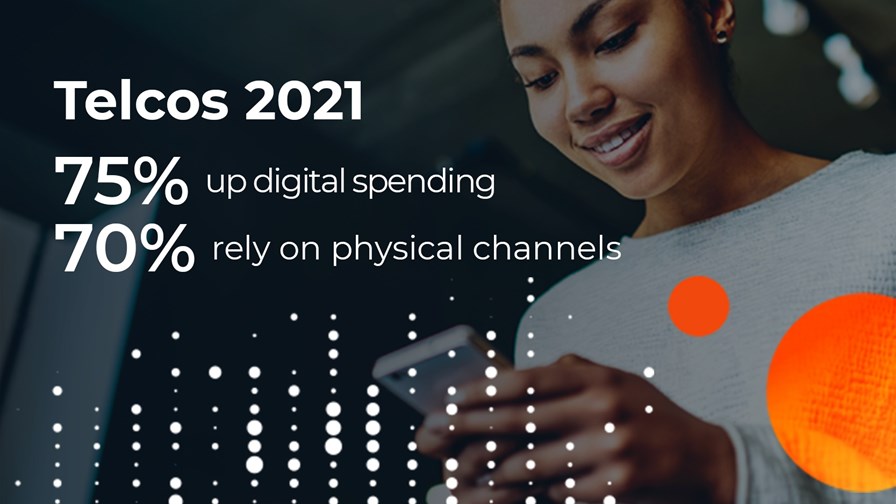 Despite the supposed transformative impact of the pandemic, it doesn’t appear that the average telco digitalisation dial has been wound up to anything near 11. According to mobile technology specialists Upstream, while 75 per cent of telcos are spending more on going digital, three out of four still rely on stores and call centres for the bulk of their sales, despite their customers being forced online during the pandemic to buy their new shiny things. The overall feel of this report - The Road to Digital - is that this will continue to be the reality for a while yet, because while nearly half the telcos asked have done some homework (like identifying their digital strategy roadmaps, change management blueprints and technology needs), only one in four profess to have determined the metrics (KPIs) by which they are to measure the effectiveness of their digitization strategies. This indicates, say the researchers, a gap between top line strategy and tactical digital project deployment. In other words “we’re just going to wait a bit and see how things work out.”

With the enterprise market in mind, SK Telecom, Dell Technologies and VMware have teamed up to develop OneBox MEC, an integrated multi-access edge computing solution designed to provide “more secure and reliable access to data at edge locations.” The OneBox MEC will use the Dell EMC PowerEdge XE2420 server “for data-intensive, low-latency edge services to deliver the performance, availability and security required for CSPs to build their portfolio of private 5G and edge solutions.” It will house the VMware Telco Cloud Platform and SK Telecom's 5GX MEC Platform. For further details, see this announcement.

A giant Open RAN talking shop has been created by a bunch of organizations keen on the development of disaggregated radio access network architectures. In what has been described as a “coalition of coalitions” – which seems like a giant red flag to us – five industry groups have pledged to collaborate on “responsible policy action in support of Open RAN.” The five lobby groups are (in alphabetical order): BSA | The Software Alliance; CableLabs; GSMA; Open RAN Policy Coalition; and the Telecom Infra Project (TIP). The mega-coalition hasn’t said exactly what it plans to do, though it seems likely that pressing various public bodies for funding will be high on the list of action points. Right now, though, the key likely beneficiary at this point appears to be Zoom…

Samsung has published its fourth quarter and full year 2020 results, which you can read about here (press release) and here (CNET analysis). The company’s smartphone division took a bit of a hammering towards the end of the year due in part to “intensified competition” (Apple’s iPhone 12 5G devices, basically), but is expecting better sales and margins in the first quarter of 2021 following the launch of new 5G devices. As for its mobile networks unit, Samsung says its “performance improved as a result of 5G expansion in Korea and 4G/5G business expansion overseas, including North America,” and that the unit will “remain active in 5G commercialization globally while continuing to seek new business opportunities” during 2021. Samsung is, of course, now a significant 5G RAN systems supplier to Verizon and is edging its way into contention elsewhere with its virtualized mobile infrastructure systems.

In related news… Apple reported its best ever quarterly revenues, a staggering $111.4 billion, of which $65.6 billion came from iPhone sales.

As a result, the smartphone market appears to be back to its pre-Covid levels with 4.3% year-over-year growth in the final quarter of 2020, according to IDC, which points out that there were a lot of elements at play. Also, it says, vendors were better prepared for the second lockdown, while the fast recovery and resilience of the smartphone supply chain has to be given some of the credit. Apple’s major pre-Christmas sales – it shipped 90.1 million devices in the quarter – took it back to pole position in the market, ahead of Samsung (73.9 million devices shipped). Read more...

Heavy industries are expected to drive the adoption of 5G network slicing, predicts ABI Research. It expects industrial manufacturing, C-V2X, and logistics alone will potentially generate cumulative revenues of US$12 billion by 2026.

Vantage Towers, the ‘vehicle’ for Vodafone Group’s mobile tower infrastructure assets and which is set for an IPO soon, has announced the members of its board.

Ribbon Communications has been holding up well despite the challenging pandemic trading conditions, announcing preliminary financial results that put its fourth quarter sales at the very top end of its guidance ($243-245 million) and better than expected margins. And the outlook is positive too, with the company anticipating full year 2021 revenues to grow by 10%. The company, which last year acquired ECI Telecom and so now provides optical and packet transport networking systems as well as cloud-ready, software communications networking, security and analytics tools, also announced a transport network upgrade deal this week with Colorado-based Eastern Slope Rural telephone.

SK Telecom has signed an MOU with the Korea Airports Corporation, Hanwha Systems and the Korea Transport Institute to collaborate for the commercialization of Urban Air Mobility in Korea. As members of ‘UAM Team Korea,’ an industry-academia-research council and policy community launched by the Korean Government, the four parties are committed to accelerating the realization of the government’s UAM roadmap through collaborative research and development in all related areas including UAM infrastructure, aircraft, air traffic, demand and receptivity. Read more...