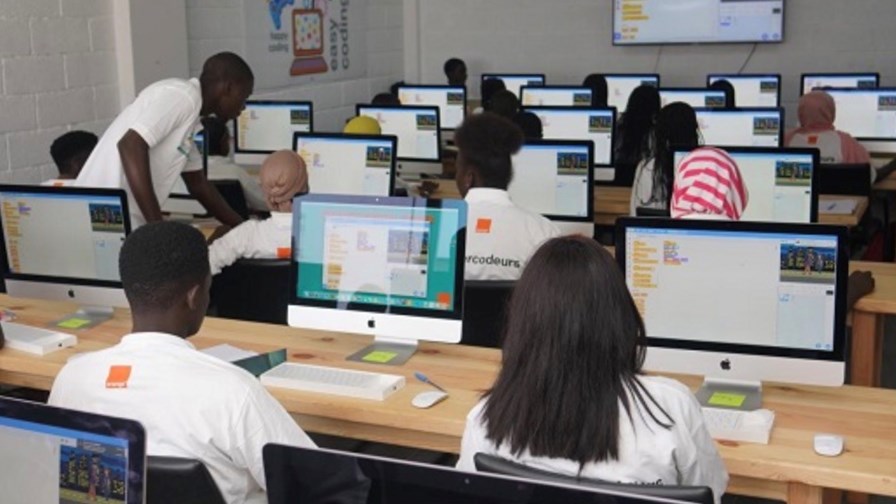 Orange has launched two new Digital Centres in Africa as part of its plan to open such facilities in each of its operating markets by 2025. The new centres are in Cameroon and Côte d'Ivoire, adding to the existing Orange Digital centres in the Middle East and Africa region in Tunisia, Senegal, Ethiopia, Jordan, Morocco, and Mali. Each centre brings together four programs in one location: a coding school; a Solidarity FabLab digital manufacturing workshop supported by the Orange Foundation; a startup accelerator, Orange Fab; and Orange Ventures Africa, the Orange Group’s investment fund. Each centre is free and open for anyone to use. Read more.

And earlier this week, Orange opened a 5G Lab in Antwerp, Belgium. According to the operator, the lab “consolidates the knowledge and expertise gathered from Orange Belgium on 5G Industry 4.0 as well as the initial co-innovation use cases delivered in the Port of Antwerp to help develop and test new and inspiring Industry 4.0 use cases.” Karine Dussert-Sarthe, EVP Orange Innovation Marketing and Design, noted: “Our growing network of Orange 5G Labs unlocks innovation from Paris to Bucharest and fosters collaboration across the ecosystem. 140 businesses have explored 5G in details with us. More than 40 have benefited from complimentary customized support to prototype how 5G can support their own products or services to unlock value. We are thrilled to open our latest hub for co-innovation in Belgium - a market fully immersed in building ground-breaking 5G use-cases that will change how businesses operate.” Read more.

Telefónica has sold its El Salvador unit for $144 million to General International Telecom (seemingly not known generally as GIT...), a shell company financed by the Atlántida Group bank, seemingly on behalf of a local investment consortium. Telefónica, which says the sale is part of its ongoing strategy to improve its group financials, had previously struck a deal to sell the El Salvador business to America Movil, but that deal fell through last year due to onerous regulatory conditions.

Japanese operator giant NTT DOCOMO has suffered a crippling service outage that impacted 4G and 5G services for hours and rendered 3G services unusable for about 29 hours, reports Kyodo News. DOCOMO issued an apology and update (in Japanese) and noted: “We deeply apologize for the inconvenience caused to our customers.” According to the operator, the problems were caused by “network congestion due to increased signal volume” during network construction.

NTT DOCOMO isn’t the only operator to have suffered outage issues in the past few days: Three UK also suffered problems that it put down to unspecified “technical issues.”

LinkedIn has quit China. After seven years, the Microsoft-owned service and app, aimed primarily at professionals wanting to network, change jobs and progress their career paths by posting their CVs online and meeting confidentially with potential employers, has said “hòu huì yǒu qī” (farewell) to China citing “a significantly more challenging operating environment and greater compliance requirements.” What this means is that the Chinese authorities don’t like LinkedIn’s social networking features in general and the posting and sharing of comments in particular. LinkedIn now joins the increasingly long list of US and western companies that have either been banned by the Chinese powers-that-be or that have upped sticks and departed before being kicked-out. Google, Facebook and Twitter are long gone. More will follow. LinkedIn got into the PRC via a Chinese “partner” company and by agreeing to monitor and censor posts made by Chinese users. Even when it entered the Chinese market LinkedIn knew it was chancing its arm, so it played both ends against the middle. In statement the company wrote that it didn’t like having to censor content but felt is just had to because it was so utterly dedicated to providing a service allowing Chinese professionals to job hunt. According to its last set of figures LinkedIn had some 53 million users in the PRC, equating to about seven per cent of all its subscribers worldwide. Microsoft won’t say how much money it makes/made from its Chinese operation but we do know that LinkedIn’s total revenues are in excess of US$10 billion a year. Seven years on, under increased pressure from the authorities and losing users to home-grown LinkedIn lookalikes, who are happy to work well within the Politburo’s strictures, whatever they may be, LinkedIn has thrown in the towel and Microsoft will forsake several hundred million of dollars a year of income. But it’s not all doom and gloom. LinkedIn says that it will be launching an exciting new and strictly ”jobs only” site, imaginatively called “InJobs” sometime within the next few months. Want to a wager on how long that will last? Commenting on Microsoft’s decision, Michael McCaul, a Texan Republican on the US House Foreign Affairs Committee, said, “US companies must refuse complicity in Chinese Communist Party oppression for market access.” Another unnamed official opined,  “We welcome this news by LinkedIn to not play into the PRC’s hand. The private sector and the international community should oppose the PRC’s weaponising of its markets to stifle free expression and support human rights.” Now the existential threat to the Chinese state posed by LinkedIn has been negated, the country’s leadership can rest easy in the knowledge that there will be no more posts about children’s books such as the subversive “House at Pooh Corner” or stories involving “heffalumps” or an “Expotition to the North Pole.” After all, Western companies must always remember that, in the words of the Mao-era chart-topping single, ”The East is Red’ - and don’t you forget it!

Still with China: A group of Republican US senators, led by Marco Rubio of Florida, are demanding that the Biden administration prohibits Honor smartphones in the US. Until 11 months ago, Honor was a sub-brand of Huawei. Last November it was spun out of its parent company and sold to what the company claimed are entirely independent now owners. In fact, Honor is now directly and evidently owned by the Chinese state rather than in the arms-length opaque way it was as part of Huawei. Huawei went on to the US Entity (ie banned) List in 2019  and Honor now belongs to Shenzhen Zhixin New Information Technology, a company that, currently at least, is not on the Entity List and thus able to buy chip and other technology from US manufacturers. Shenzhen Zhixin New Information Technology is majority owned and controlled by the state-owned Shenzhen Assets Supervision and Administration Commission of the People’s Republic of China. Back in May, Rubio posted a blog saying, “Wall Street must stop enabling Communist China. Americans from across the political spectrum should feel emboldened by the growing bipartisan awakening to the threat that the CCP [Chinese Communist Party] poses to American workers, families, and communities. As we deploy legislative solutions to tackle this challenge, Democrats must not allow our corporate and financial sectors’ leftward shift on social issues to blind them to the enormity of China as a geo-economic threat.” Six months later, he’s back leading a group demanding that Honor be placed on the Entity List as a “threat to US national security.” He, and many, many others, believe that Honor to be an integral part of the Chinese state that is currently able to circumvent restrictions and “dodge critical American export controls” by buying leading-edge US technology that Huawei and ZTE can no longer access.

Over in Canada, scientists at the Institute National de la Recherche Scientifique (INRS), which is part of the Université du Québec, have developed an evolutionary-based, intelligent pulse-shaping optical waveform generator on a semiconductor chip that will improve optical signal processing in telecoms settings. The search for an optical waveform generator able to autonomously output a target waveform for online monitoring with long-term reliability, low losses, easy fibre connectivity and exceptional functionality has been underway for some time. Earlier efforts by other institutions could manage just one or two of the desired key features at a time but the INRS device meets all of them. The team used evolutionary optimisation algorithms to repurpose a programmable chip and make it to operate above its original design and performance parameters. The development could have profound potential consequences for telecommunications networks.

US fast-food restaurant chain Wendy’s has partnered with Google to create what might be called a virtual integrated dining experience or a cloud aggregated fast food experience (or any experience you like), using all the usual trigger words in a different order. The recipe is to use Google’s various services - Google Cloud’s data analytics, artificial intelligence (AI), machine learning (ML), and hybrid Cloud tools - to automate a virtual fast food experience, so customers can use their mobile phones or interactive touch-points to order food at ‘drive thru’ areas. Other Google technologies are also ‘leveraged’, such as speech to text, and Google Search and Maps to speed potential customers to the nearest Wendy’s. To top it all off, Wendy's is going to use Google Analytics to refine the whole dining journey as time goes on. Maybe I’m missing something, but the Wendy’s foray into the wacky world of automation so far doesn’t seem to add much to what other fast food restaurants have already been doing for several years. And will it make its food taste as good as an In-N-Out burger? If only...

ADVA says i3D.net has deployed its FSP 3000 TeraFlex to boost performance for its 50 million online gamers. The technology significantly increases capacity, reduces latency in its global transport network and means i3D.net can harness previously unused spectrum and optimise all available optical paths. It claims the TeraFlex terminal will also benefit i3D.net’s enterprise customers, who will be able to use low-latency video conferencing applications. Read more

STMicroelectronics and Sierra Wireless say they will collaborate on IoT solutions deployment by enabling the STM32 microcontroller (MCU) user community to use cellular IoT connectivity and edge-to-cloud solutions from Sierra Wireless. They claim the agreement will help solution developers tackle the diverse challenges involved in creating and deploying IoT solutions, including device design and development, enrollment with a cellular network, and connection to cloud services (more detail on the agreement available here). The overall objective is to give solution developers a faster “time-to-market”.