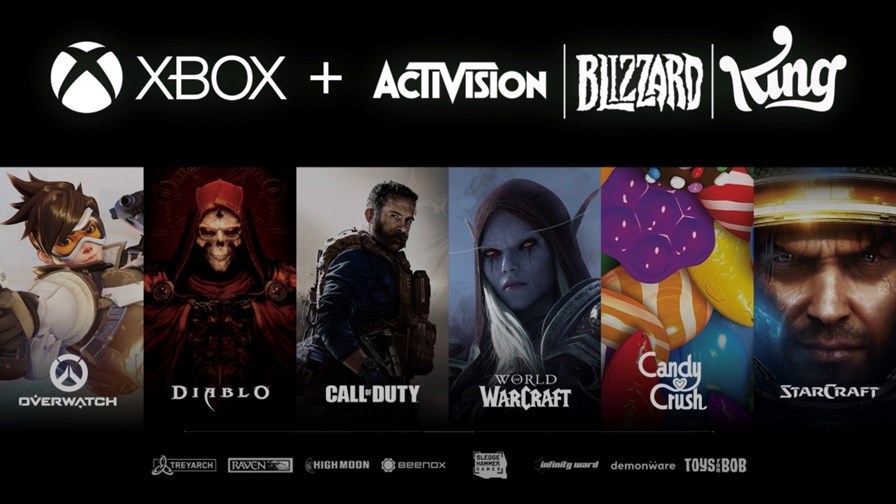 A massive M&A statement by Microsoft and further network asset sales by Telefónica are at the front of today’s news queue.

Microsoft unveiled plans to acquire gaming company Activision Blizzard for $68.7 billion in a massive deal which, if approved by relevant authorities, will make the tech giant the third-largest gaming company by revenue in the world, ranking just below Tencent and Sony. With this move, Microsoft is placing a huge bet on the future growth of its gaming business across mobile, PC, console and cloud. In addition, it said the acquisition will provide “building blocks for the metaverse”. The company explained gaming was now the fastest-growing form of entertainment, and it aimed to make its subscription service Game Pass among “the most compelling and diverse lineups of gaming content in the industry”. Microsoft chairman and CEO Satya Nadella commented: “We’re investing deeply in world-class content, community and the cloud to usher in a new era of gaming that puts players and creators first and makes gaming safe, inclusive and accessible to all.” Through the acquisition, which is expected to close in fiscal year 2023, Microsoft will take ownership of highly popular franchises such as “Warcraft”, “Diablo”, “Call of Duty” and “Candy Crush”. Read more about the deal here.

The takeover comes after Activision Blizzard was embroiled in a misconduct scandal, followed by reports of employee dismissals.

Telefónica has reportedly sold part of its Spanish copper fixed access network to infrastructure investor Macquarie for €200 million, according to a report by Spanish newspaper Cinco Dias. Telefónica is in the process of decommissioning its copper access networks so the move makes sense in terms of its network and financial strategy, as the operator has been seeking ways to raise funds from asset sales during the past couple of years.

The potential interference problems that 5G networks using C-band spectrum could cause to US airlines has once again flared up, with the CEOs of major companies such as American Airlines, Delta, Southwest Airlines and United Airlines warning in a letter sent to senior government and regulatory officials that the launch of services from 19 January could cause havoc with their already pandemic-ravaged operations, and that the impact on cancellations, delays and passengers, thousands of whom could be stranded overseas, could be “catastrophic,” according to a Reuters report. The problem has been brewing for months, with AT&T and Verizon having delayed the launch of their services several times already, but now the situation is about to come to a head, with the two major operators set to switch on their services this week. The airlines are asking the operators, which snapped up most of the C-band spectrum in the auction that concluded last February, to continue to delay the launch of their services within a few miles of airports so as to avoid interference with aircraft security systems.  Expect to hear a lot about this during the next few days.

Ericsson has once again taken legal action against Apple, alleging 5G wireless patent infringements related to its iPhones, Reuters reported. The vendor has filed a set of lawsuits against the tech giant following legal action it took in October 2021, accusing Apple of attempts to improperly reduce the royalty rates for telecom patents. The new lawsuit has reportedly been brought because a prior agreement between the pair has expired and there was no consensus yet on terms of a new licence.Apple hit back at Ericsson with a lawsuit in December 2021, accusing the vendor of “violating its obligations to license patents essential to industry standards on fair rates and is making unreasonable demands”, as reported by 9to5Mac.

Pietro Labriola, General Manager of TIM (Telecom Italia), will reportedly outline a plan for the operator’s future as an alternative to considering the takeover bid proposed by Kohlberg Kravis Roberts & Co. L.P. (KKR) in November 2021. Reuters said Labriola intended to present his plan “to revamp the former phone monopoly” to the operator’s directors, with the proposal set for an assessment on 2 March. KKR bid €10.8 billion to acquire TIM outright, but that offer is looking less and less likely to be considered, let alone accepted, buy the day. Read more here.

BNDESPAR, subsidiary of Brazil’s National Bank for Economic and Social Development, launched a public call for the selection of investment funds focused on infrastructure, including telecoms, to develop the market, speed-up private investment and improve the quality of services in the sector. The entity’s investment in each fund will be up to BRL500 million ($90.4 million) and the selection process is expected to finish in the first half of the year. You can find out more about the initiative here (in Portuguese).