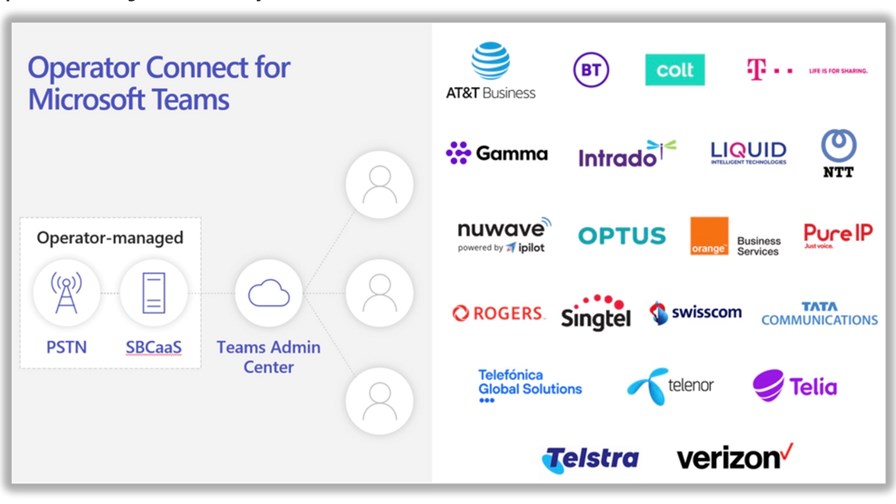 The ongoing importance of reliable voice communications for the enterprise sector and the latest automated drone action in the UK sit on top of today’s news pile.

Microsoft has made its Operator Connect for Microsoft Teams generally available, a move that enables enterprises to use PSTN services via the Teams collaboration platform via participating operators, which include BT, Colt, Deutsche Telekom, NTT, Singtel, Telefónica Global Solutions, Telia, Verizon and more (see the graphic above). As part of the launch, BT’s Global unit launched a new BT-branded global managed voice service.  “It’s at the cutting edge of future voice services innovation,” stated BT Global’s wonderfully-named CEO, Bas Burger. “Delivered directly through Teams, it securely integrates telephony, engineered for quality of service, with the very latest in digital collaboration. For customers, it will provide pace, simplicity and reach, helping them accelerate their digital transformation by enabling new productive, hybrid workstyles built around Teams.” Peter Coppens, VP Product Portfolio at Colt, commented: “The last 18 months have shown that voice services are one of the most important aspects of a company’s infrastructure. An enhanced and streamlined cloud voice service helps power enterprise productivity and agility.”

And swinging back to BT.... The UK national operator says it has successfully completed an automated drone trial at the Port of Southampton in partnership with Associated British Ports (ABP) and RoboK. “The trial demonstrated a drone flying over the port’s vehicle inventory lot, with images captured and fed into an artificial intelligence (AI) powered system to track and analyse vehicle occupancy levels,” noted BT in this announcement.

And here’s something that will impact BT in one way or another... UK regulator Ofcom says British broadband and landline customers will “find it easier than ever to change provider and secure a better deal, under a new ‘One Touch Switch’ process... The change means all home broadband users – including cable and full fibre customers – will only have to contact their new company to switch, with no need to speak to their current provider before making the move.” That’s great news for consumers if it works! Read more.

Verizon has announced a new version of its BlueJeans conferencing platform that enables users to create collaboration avatars and meet and interact in real time in digital spaces. From the promo video we saw, it doesn’t look like BlueJeans hired the team that worked with James Cameron back in 2009... Read more.

As PONs and wireless networks get faster, optical fibre needs an upgrade to keep up, says Prysmian, which is advocating “bend insensitive” fibre as an integral part of Fibre-to the-X (FTTx) and 5G mobile networks. Operators that can take advantage of advanced fibres, and in particular fibre conforming with G.657.A2, will achieve the most potential from their deployed networks it’s claimed. An interesting stroll through the dynamics of bend-insensitive fibres can be had with this communication from Prysmian Group.

Speaking of fibre deployment… Slovenia’s Telekom Slovenije’s fiber-to-the-home (FTTH) deployment is to use the Quillion chipset-powered Nokia ISAM FX series to replace some existing access nodes and to support the newly built FTTH network which covers the entire country. It will enable Telekom Slovenije to immediately offer up to 10Gb/s services for residential and business customers, with the option of evolving to 25Gb/s PON to support advanced services. Read more...

And in yet more fibre news...  Orange says it’s just landed the AMITIE submarine cable(in which Orange is a partner) on a beach near Bordeaux using environment-friendly ‘horizontal directional drilling’. The 6,800 km cable project  connects Massachusetts to Le Porge in France and Bude in the UK. Commissioning is scheduled for early 2022.

On the regulatory front, the FCC has set out the rules for small carriers applying for financial assistance to rip and replace network equipment and services from Huawei and ZTE. Carriers must have under 10 million customers and the equipment concerned must  be capable of speeds above 200kbps to qualify for a share of the  $1.9 billion fund.  For older networks where like-for-like replacement is not possible LTE or 5G-ready equipment would be allowed, but the funds can’t be used to replace microwave backhaul or fixed wireless links with fibre links.

Still on helpful regulation... the Indian regulator, DoT, has amended the commercial VSAT license rules to enable sharing of satellite infrastructure and backhaul by service providers, but DOT says the regulatory adjustment will apply more broadly and means telecom operators will now be able to share active infrastructure, including core networks,  “The Licensee may share its own active and passive infrastructure for providing other services authorized to it under any other telecom license issued by Licensor,” the department said in a notification.  According to Developing Telecoms the move will reduce the capital and operational expenditure of telecom operators like Reliance Jio, Bharti Airtel, and Vodafone Idea because previously only mobile towers and some active electronic components in the network were allowed to be shared between telcos.

The potential for cloud technologies to break down silos and enable more contextualized views of data is having a dramatic impact on enterprise investment priorities for operations, according to IDC. It found organizations ranked cloud highest priority, followed by wireless connectivity and artificial intelligence and machine learning (AI/ML). At present fewer than 20% of organizations say they’ve put more than 50% of their operational data in the cloud. Read more...