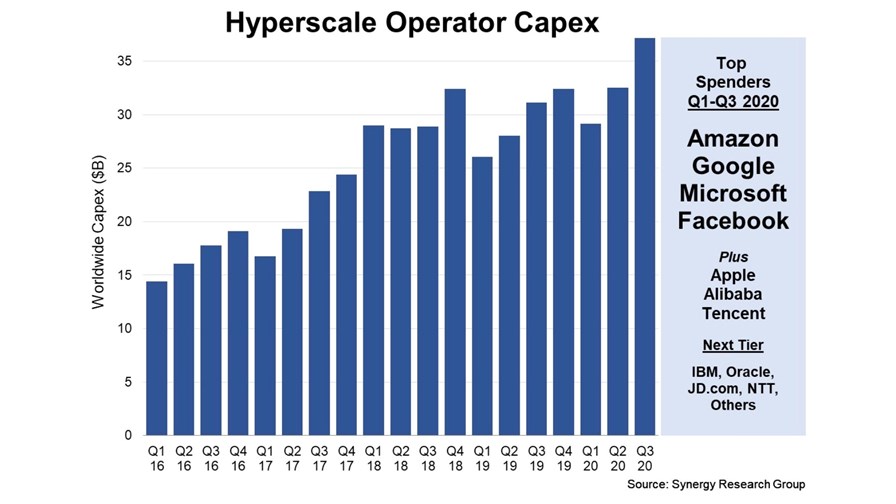 Hypercsale capex, Google's comings and goings and a Viasat acquisition nudge their way to the front of today's news queue.

Hyperscaler capex in the third quarter topped $37 billion, “easily setting a new record for quarterly spending,” according to Synergy Research Group (see graphic above). Total spending for the first three quarters totalled $99 billion, up 16% year-on-year. The top four hyperscale spenders in the first three quarters of 2020 were Amazon, Google, Microsoft and Facebook. For the full details, see this Synergy Research press release.

The analysis came as Google Cloud announced it is set to add three new ‘regions,’ which provide faster and more reliable services in targeted locations, to its global footprint. The new regions in Chile, Germany and Saudi Arabia will take the total to 27. See this blog for further details and the map of the current regions.

Still with Google… It has filed a 42-page rebuttal to the US government's impending federal antitrust lawsuit designed to clip the wings of the hubristic Big Tech companies such as Facebook, Amazon, Apple and the "don't be evil" one. The Department of Justice has been sent a document compiled by a massed phalanx of corporate lawyers that, in detail, lists paragraph-by-paragraph and line-by-line Google's denials of the allegations made against it, reports The New York Times. It's a defence long on repeated self-justification and full of verbiage but comes down to re-iterated claims that it is not a de facto monopoly and its only and utterly altruistic purpose in life is to "organise the world's information and make it universally accessible and useful." It adds, “People use Google Search because they choose to, not because they are forced to or because they cannot easily find alternative ways to search for information on the Internet." This month alone, the Federal Trade Commission and 40 state attorneys general have filed suits against Google asserting that the company did deals with device makers such as Apple, LG and Samsung to ensure the Google's was the automatic default search engine on their smartphones and pads. Google claims that buying the right to have its search engine as the default on billions of devices is just the same as a chocolate maker paying a premium for eye-level space on shelves adjacent to the check-out tills in supermarkets. Google also claims it is "easy" for consumers with Apple- or Android-powered kit to switch from its search engine to any other, which, in the opinion of this writer, it ain't. Google does, however, admit that its parent company is valued at about one trillion US dollars, but denies that it is worth anything like as much as that itself.

And there’s more… Least surprising revelation of 2020? Facebook and Google appear to have agreed to cooperate and assist one another if they ever faced an investigation into their pact to work together in online advertising, according to an unredacted version of a lawsuit filed by 10 states against Google last week. It alleges that a deal was cut in September 2018: Facebook would not compete with Google’s online advertising tools in return for special treatment when it used them, reports the Wall Street Journal.

Satellite communications firm Viasat is buying communications networking and solutions integration specialist RigNet in an all-stock deal valued at $222 million. The move is part of Viasat’s efforts to expand its business with enterprise customers that need connectivity and networking systems at remote locations. “We have broad experience integrating broadband connectivity and networking capabilities in the most challenging environments—gained from our global deployment of more than 1,200 onshore and offshore sites and 11,000 Industrial Internet of Things (IIoT) sites,” noted RigNet CEO Steven Pickett. “This combination also represents an outstanding opportunity for us to accelerate both the investment in and the adoption of our digital transformation solutions more rapidly outside of our core oil & gas vertical,” he added in this official announcement.

Vodafone has offered to buy the shares of the remaining minority stakeholders in Kable Deutschland, the cable operator in which Vodafone bought a controlling stake of 76.8% in 2013. A number of the stakeholders have already agreed: If they all accept Vodafone’s offer, snapping up the tranche it doesn’t currently own will cost Vodafone €2.6 billion.

Still with Vodafone… The operator says it has completed the merger of the tower infrastructure assets owned by Vodafone Greece and Wind Hellas. The combined entity, Vantage Towers Greece, is the largest tower infrastructure company in Greece: Vodafone will own 62% of Vantage Towers Greece, while Crystal Almond (no, really!), the controlling shareholder of Wind Hellas, will own the remaining 38%.

Alaska Communications has managed to squeeze a bit more cash from its suitors, Macquarie Capital and GCM Grosvenor, having agreed a new takeover deal that values it at $3.26 per share, slightly more than the previous price of $3.20. The new deal values the takeover transaction at $325 million.

Indian technology is looking fab to western comms companies… Six months ago, 20 Indian soldiers were killed in an extremely violent clash with Chinese troops in the Galwan Valley in Ladakh, where a border dispute over a small area around the so-called "Line of Actual Control" has been simmering for 45 years. The nasty skirmish came even as Chinese telecoms equipment companies including Huawei and ZTE were being banned from siting their products in the comms networks of the US, the UK, Australasia and an increasing number of European and other states. As the relationship with China curdled, the Indian government and manufacturing companies were quick to present themselves to the west as friendly and safe alternative sources of mobile and fixed-line comms technologies. Now as China is feeling the financial pinch as many western sources of income (and technologies) dry up, the Indian government's Ministry of Electronics and Information Technology is exploiting the PRC's discomfiture and touting the country's undoubted potential ability to take the place of Chinese high-tech companies and become a trusted source of equipment guaranteed to be free of secret back-doors, surveillance software and spyware. Thus India is currently seeking "expressions of interest" from western companies wanting to build a leading-edge (below 28nm) semiconductor fabrication plant in the country. India's excellent technologists and engineers are highly-trained, innovative and highly thought-of, as many a western company will happily testify. It now seems likely that Indian tech companies will get the work and the trust that the likes of Huawei have forfeited.