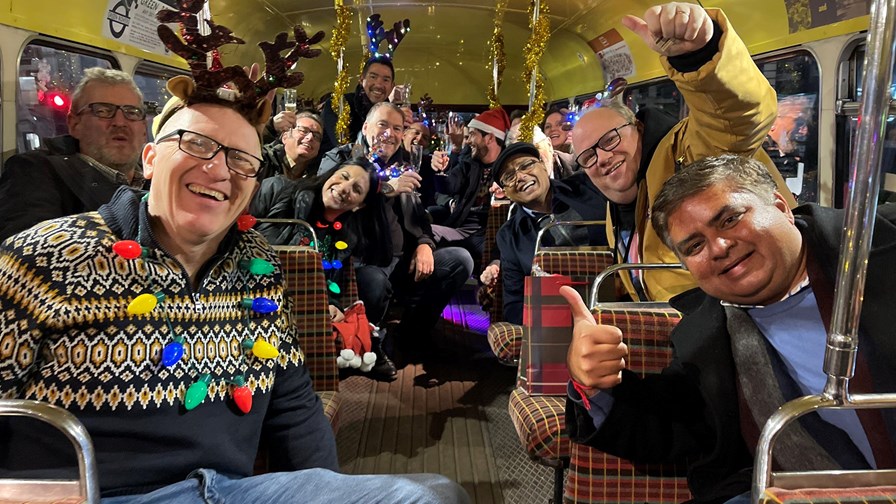 In today’s industry news roundup: Fun and serious debate in London; Ciena gets an early Christmas present; investments in fibre access networks are continuing to ramp up; and more!

Today is the Great Telco Debate, an in-person telecom industry event like no other, featuring a day of motions with arguments for and against some of the most important and contentious developments in the industry. It’s lively, important and fun. The fun part started yesterday, with a pre-Great Telco Debate London Routemaster bus party, organised by TelecomTV and sponsored by TelcoDR, whose founder and CEO Danielle Royston is also one of the speakers during today’s debates. Royston, her team, the TelecomTV crew and various industry executives from telcos, vendors and industry organisations gathered to chat, enjoy the London lights, drink fizz, eat mince pies and, well, hang out! And why not, now that we can! Now the actual debate sessions are underway and eliciting a fantastic array of questions for the guest speakers and some, perhaps surprising, votes for and against the various motions under discussion…. Catch all the action online!

Optical networking systems giant Ciena has reported fourth-quarter revenues of $971m which, despite being slightly lower than last year’s massive $1bn-plus quarter, was higher than anticipated. “Our strong fiscal fourth quarter financial results were better than expected as we benefitted from some favourable supply chain developments in the second half of the quarter," noted the vendor’s president and CEO, Gary Smith. "Looking ahead, we expect to deliver outsized revenue growth in fiscal 2023 given our significant backlog and continued signs of gradual supply improvement. And, we remain confident that the durability of secular demand drivers and our strategic investments to expand our addressable market position us to deliver strong revenue growth over the next several years." For its full fiscal year, Ciena reported revenues of $3.63bn, just slightly higher than the previous 12-month period. The news gave Ciena’s share price a massive 17% boost in pre-market trading to $50.72. Read more.

The value of broadband network equipment sales grew by 17% year on year in the third quarter of 2022 to $4.7bn, according to data compiled by research house Dell’Oro Group. The growth was driven by increasing investments in the passive optical networking (PON) technology needed for fibre-to-the-premises/home (FTTP/H) deployments in which many network operators around the world are investing heavily. According to Dell’Oro, spending on PON optical line terminal (OLT) equipment, which is deployed at the edge of the network and from which fibre lines connect to customer premises, exceeded the record $1.3bn that was spent in the second quarter of this year. “Thanks to a robust competitive environment and ongoing subsidisation efforts, investments in new fibre broadband networks and equipment continue to grow,” noted Jeff Heynen, vice president at Dell’Oro Group. “It will be interesting to see if this momentum and resilience will carry into the fourth quarter and 2023, given the macroeconomic headwinds,” he added.  Read more.

The governments of the UK, Australia, Canada and the US have published a joint statement on “telecommunications supplier diversity, setting out their joint commitment to working together on secure and resilient telecoms supply chains,” with a heavy emphasis on accelerating Open RAN developments. The UK government believes the international support for its pro-Open RAN initiatives will “boost efforts to reduce the world’s dependency on a small number of telecoms companies to build and maintain 5G and future networks, and help open up the global market to new entrants.” Read more.

BT’s Digital unit, headed up by Harmeen Mehta, has struck a deal with Tata Consultancy Services (TCS) that will see the IT services and systems integration giant “work with BT to manage and ramp down over 70% of Digital’s legacy technology estate”. The revamp, which BT claimed “significantly simplifies and restructures Digital’s existing supplier relationships”, is expected to deliver annual savings of £65m by the end of the operator’s fiscal year 2025, and contribute towards BT’s plan to cut its operating costs by £3bn by that deadline. “A primary goal of the programme is to boost Digital’s capacity and focus to build its new strategic technology architecture faster, supporting the Group’s growth. It will also de-risk and accelerate the Group’s transition from legacy systems, an outcome structured into the deal,” noted BT. As a result of the agreement, some 400 BT staff “will have the opportunity to join TCS”. Read more.

Chip manufacturing giant Taiwan Semiconductor Manufacturing Co (TSMC), which is already building a large facility in Arizona, US, that will start production in 2024, says it has “started the construction of a second fab, which is scheduled to begin production of 3nm process technology in 2026. The overall investment for these two fabs will be approximately $40bn, representing the largest foreign direct investment in Arizona history and one of the largest foreign direct investments in the history of the United States.” It added: “In addition to the over 10,000 construction workers who helped with construction of the site, TSMC Arizona’s two fabs are expected to create an additional 10,000 high-paying high-tech jobs, including 4,500 direct TSMC jobs. When complete, TSMC Arizona’s two fabs will manufacture over 600,000 wafers per year, with estimated end-product value of more than $40bn.”  Read more.