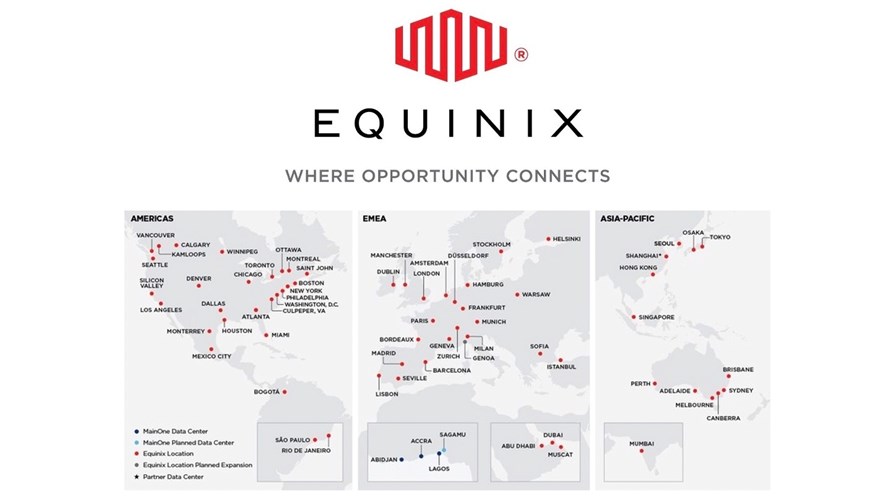 The latest Equinix acquisition, Open RAN action in Japan and a monster valuation for customer care solution expert Genesys are at the front of today’s news queue.

Equinix will soon be able to claim a data centre presence in all the major continents of the world if its agreement to acquire African company MainOne in a deal valued at $320 million is completed as planned in the first quarter of 2022. The acquisition will give Equinix its first facilities in Africa – three existing data centres in Nigeria, Ghana and Côte d'Ivoire, and another under construction in Nigeria. "The acquisition of MainOne will represent a critical point of entry for Platform Equinix into the expansive and rapidly growing African market,” stated Charles Meyers, President and CEO at Equinix. “MainOne's leading interconnection position and experienced management team represent critical assets in our aspirations to be the leading neutral provider of digital infrastructure in Africa,” he added in this announcement.

NTT DOCOMO has completed a successful trial of a fronthaul deployment as part of a multi-vendor 5G Open RAN architecture with Nokia, the two companies have announced. “During the trial at DOCOMO’s Lab in Yokosuka, Nokia’s 5G O-RAN AirScale baseband was successfully integrated and tested with third-party O-RUs (radio units),” states the vendor. “Nokia’s O-RAN capabilities are built on top of its AirScale software and provide the same high level of performance, functionality, and security as Nokia's radio products. Nokia is helping to prepare for the network architecture of the future by building open interfaces on top of its existing solutions, offering CSPs a choice to pursue O-RAN,” added Nokia in this announcement. Sadayuki Abeta, General Manager of Radio Access Network Development Department, NTT DOCOMO, added: “NTT DOCOMO has been actively driving open RAN standardization and commercialization, being the world’s first operator to deploy multi-vendor O-RAN solutions for the 5G network. Successful testing with Nokia is an important step in further accelerating open RAN commercialization and its global expansion.” Read more.

The news comes as reports from Japan suggest that DOCOMO, Rakuten Mobile and NEC are to collaborate in 5G Open RAN tests and trials organized by Japan’s Ministry of Internal Affairs and Communications as part of the country’s efforts to be at the forefront of global Open RAN innovation, reports Nikkei Asia. All three Japanese companies are, of course, already among the world’s leading forces in the emerging Open RAN sector.

Customer care solutions specialist Genesys has been valued at more than $21 billion following a $580 funding round from a selection of investors including Salesforce Ventures, ServiceNow Ventures, Zoom Video Communications, funds and accounts managed by BlackRock, D1 Capital Partners and another large US-based West Coast mutual fund manager. The company says that during the past two years it has “undergone a significant transformation across its leadership, business model, solution portfolio and ecosystem, resulting in strong growth. The company’s cloud and subscription bookings, which make up more than 90% of total new bookings, grew more than 100% year-over-year in the first half of fiscal year 2022 (February 1, 2021 to July 31, 2021).” Read more.

TPG Telecom has issued a statement of intent to be a major player in the Australian enterprise services market with an aggressive growth target backed up by the announcement that it has landed a services deal with major airline Qantas, which previously took its services from Telstra. “Given the size of the business market and our strong network assets and products, TPG Telecom should be able to reach A$1 billion-a-year business revenue and we think that’s achievable by 2025,” stated Jonathan Rutherford, TPG’s Group Executive Enterprise and Government. Read more.

Giant car maker Volkswagen has selected Nokia to deploy a pilot private 5G standalone wireless network at the automotive manufacturer’s main plant in Wolfsburg, Germany. “The private campus network uses the Nokia Digital Automation Cloud (DAC) solution to provide reliable, secure, real-time connectivity and enable Volkswagen to trial new smart factory use cases,” noted Nokia, which has had significant success in the mobile private networks market during the past few years. “With the pilot project, Volkswagen will test whether the 5G technology meets the demanding requirements of vehicle production with the goal to increase efficiency and flexibility in series production of the future,” added Nokia. Read more.