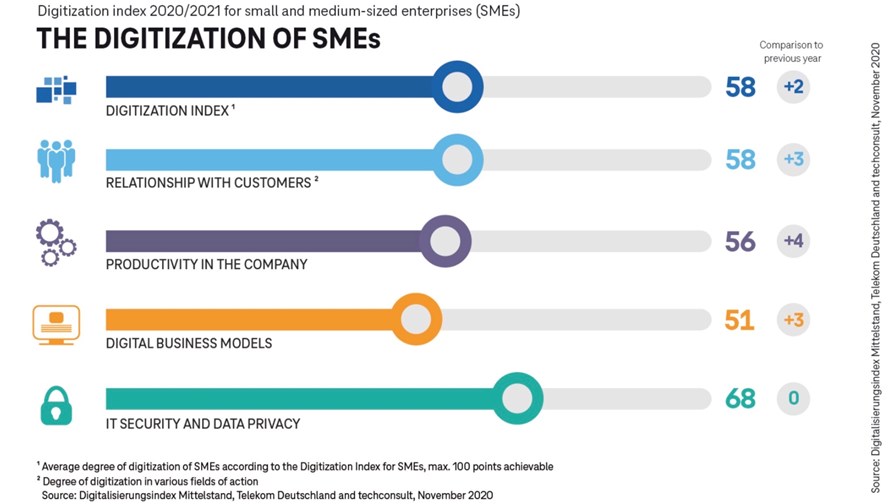 The creeping digitization of the German SME sector, a leap into financial services by Telefónica, a windfall mini-budget from Orange and a brewing storm at the FCC are just some of the topics jostling for attention in today’s industry roundup.

Deutsche Telekom has conducted a significant study of small- and medium-sized enterprises (SMEs) in Germany to find out how digitized their processes and services are and how that impacted their ability to withstand the pressures caused by the Covid-19 pandemic. The survey results, a snapshot of which are shown above, show that more and more German SMEs are applying digital processes to their internal processes, customer relationships and business models. See this press release for further details.

In the latest example of how telcos are spreading their business wings into adjacent industries, Telefónica has teamed up with BBVA bank in Colombia to form a joint venture company, called Movistar Money Colombia, that will offer financial loans to Telefónica’s 19 million customers in the country. See this announcement for further details.

Orange has decided what to do with its recent €2.2 billion tax rebate windfall. One quarter of its will go towards further network investments, another quarter will go to strengthening its “operational transformation” to make it more agile, and another chunk is set to go towards the possible full takeover of Orange Belgium by acquiring the shares it doesn’t currently own via a conditional voluntary buyout. Decisions are yet to be made on the funds that will go towards an investor dividend, employee share offers and the operator’s social commitments, including the reduction of its carbon footprint. Read more.

And so the power games at the FCC crank up a notch… With current Chairman Ajit Pai currently packing his desk ahead of his January departure, industry sources suggest Republicans and telecom industry bigwigs are hoping to block incoming president Biden from appointing a new boss to the FCC, gridlocking the agency and preventing it from restoring consumer protections, especially net neutrality, according to this article in online publication Vice. Part of that move is to fast-track the appointment of a new FCC Commissioner in the form of Trump supporter Nathan Simington, who is now in line to fill the seat vacated by Mike O’Rielly in August: If Simington is appointed, the FCC would have a 3-2 Republican majority until Pai leaves on 20 January next year, after which the FCC would be in a 2-2 gridlock, with an equal number of Republican and Democrat Commissioners. Biden, it seems, would then struggle to get any Democrat appointment to get the FCC back to its regular five in the near term. The Commission would, in effect, be hamstrung and left with a lingering whiff of Pai, whose tenure would have lasted until late June next year if he hadn’t quit. Pai was widely adjudged to have been overtly sympathetic to US ISPs and their commercial penchant for slowing or even completely blocking data traffic on their networks whilst offering unrestricted (and more expensive) "high-speed traffic lanes" to those able to pay over the odds for preferential treatment. Recently Pai has been acting to translate Trump's executive order re: tougher regulation and policing of Big Tech and social media companies into practical reality, actions for which he was widely applauded. The odds are on either of the two current Democratic FCC Commissioners, Jessica Rosenworcel or Geoffrey Starks, being named as the new Chairman.

Test system specialist EXFO says its new Nova Active over-the-top (OTT) video monitoring tool enables service providers to “automatically detect and diagnose the root cause of video streaming problems as soon as they begin, and identify their origin — whether inside or outside of their networks.” The vendor claims this is an industry-first, and if it “does what it says on the tin” then it could have a network monitoring hit on its hands. See this press release to find out more.

Facebook is facing massively enhanced regulatory oversight as a direct result of its infamous continuing ​penchant for buying up startup companies that it deems to be a potential competitive threat, thus effectively gelding them. But even though investigation and legislation that will curb its excesses is pending, Facebook continues upon its merry way acquiring, adapting or neutralising rivals as it goes. The latest to be gobbled-up (for a mere one billion bucks) is Kustomer, a five-year old, New York-based customer relationship management company. That nice, young(ish) Mr. Zuckerberg wants to ramp up Facebook's e-commerce activities through messaging and Kustomer specialises in customer-services platforms and chatbots to facilitate "continuous omnichannel conversations" and, via AI, present "a single, customised actionable view of customers" on a single screen. In a press release, Facebook stated, "This deal is about providing more choices and better products for consumers. The key to Facebook’s success has always been innovation, with M&A being just a part of our overall business strategy, and we will continue to demonstrate to regulators that competition in the technology sector is vibrant." Of course you will, Mark, of course you will. Until you don't.

Verizon says that as a result of implementing the STIR/SHAKEN call authentication technology that has been mandated by the FCC and which must be deployed by all US operators by June 2021, it has protected 75 million customers from nearly 9 billion unwanted calls. See this press release for further details.

"Juneau what's the bandwith's like for Ruby Wainwright at College in Alaska? Eek! I dunno. I'd ask her but she's not answering. She's in Nightmute.” Quintillion Networks of Anchorage, Alaska, connects some of the most remote rural towns and settlements on the planet and is enjoying resurgent success after an unfortunate incident that saw company co-founder and CEO, Elizabeth Pierce, jailed for five years for wire fraud, forgery and identity theft after she forged signatures on telecoms services contracts worth over US$1 billion. Under new management, Quintillion is thriving and will receive part of the recently announced $908 billion federally funded telecoms stimulus package. Quintillion is the first and only telecommunications operator to build a submarine and terrestrial fibre-optic cable network in the US Arctic, and has already laid a festoon of more than 1,600 miles of fibre off and along the Alaskan coast, providing high-speed Internet access to thousands of homes and businesses in the 49th and largest United State of America. (Alaska is more than twice the size of Texas but has a population of just 750,00 compared to the 30 million people who live in the Lone Star State). The system connects to the lower-48 states via existing networks. (BTW, Juneau, Ruby, Wainwright, College, Eek and Nightmute are the names of towns and settlements across Alaska).