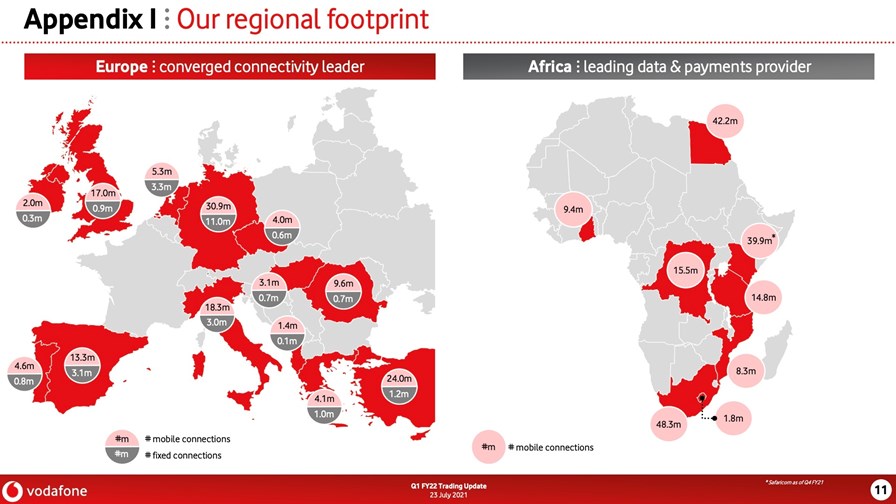 Vodafone brought some cheer to the EMEA telecoms sector Friday with news of a 5.7% year-on-year increase in revenues to €11.1 billion in its fiscal first quarter that ended 30 June, aided by the return of roaming revenues as people started travelling again in greater numbers as the pandemic subsides.

The operator saw an uptick in revenues across the board, from consumer and business customers and across its European and African markets, with Italy the exception (revenues there dipped 3.6% as Iliad continues to fuel price-based competition).

Roaming and ‘visitor’ revenue jumped dramatically, by 56% compared with the same period a year ago (which was prime lockdown time in many European countries), but is still only about half of pre-pandemic levels, so there is still some likely improvement still to come if international mobility continues to increase (that’s a big ‘if’).

Vodafone Group ended June with 272.4 million mobile customers (not including VodafoneZiggo in the Netherlands and Safaricom in Kenya), of which 108.2 million are in Europe, 88.6 million in Vodacom’s markets across Africa, 24 million in Turkey, 42.2 million in Egypt and 9.4 million in Ghana (see chart above). The operator says it has launched 5G services in 243 cities in 10 markets.

In Africa, where the operator’s stake in Vodacom accounts for the bulk of its business, its M-Pesa mobile money service continues to grow in popularity, adding 6.9 million new users in the past year to reach a total of 49.7 million (including Safaricom in Kenya). During the quarter the M-Pesa platform processed 4.5 billion transactions compared with 3.1 billion in the same period a year ago. According to Bloomberg, Vodafone Group CEO Nick Read hinted during a briefing with reporters this morning that M-Pesa could be spun out in the future.

That the market is still in recovery mode was reflected in comments from CEO Read. “In Europe, the operating and retail environment has not yet returned to normal conditions, but we are delivering a good service revenue performance. In our Business segment, we are seeing stronger growth with our public sector and corporate customers, whilst further building a pipeline of demand for our digital services, such as IoT, security and cloud.”

Vodafone Business, which accounts for more than a quarter of Group service revenues, reported a 3.2% increase in service revenues to €2.54 billion. “We continued to see strong demand from SMEs and the public sector, with improvements also driven by the automotive sector and large multinationals. We became the first operator in Europe to launch Mobile Edge Computing (‘MEC’) with Amazon Web Services Wavelength and launched Cybersecurity-as-a-Service (‘CaaS’) in Germany,” the operator noted in its trading report.

And while IoT is still not quite living up to the hype of a few years ago, Vodafone (one of the most committed operators in this area) continues to expand this part of its business as IoT SIM connections hit 129.8 million, up by 21% from 107.3 million a year earlier.

And it’s worth remembering too that Vodafone is not just a mobile service provider: It has an extensive fixed broadband access network across Europe (passing 142 million premises) and 22.3 million broadband customers across the region, almost 11 million of which are in Germany. In Italy it has struck a partnership with wholesale broadband network operator Open Fiber, via which it can now offer broadband services to 8.4 million homes, and operates a fixed wireless broadband network that reaches 4.5 million homes and businesses in the country.

It also has 18.5 million TV customers across Europe, of which 13.4 million are in Germany.

Vodafone’s share price edged up by more than 2.6% at 119 pence on the London Stock Exchange following the report’s publication.