TMT IPOs had record year in 2021 with 72% growth year on year driven by ecommerce, mobile, fintech and cloud, says GlobalData

Tech, Media, and Telecom (TMT) IPOs had the strongest year for over 3 years in 2021 with $237 billion of IPO proceeds raised. Established themes have seen the most successful IPOs between 2018 and 2021, with ecommerce the strongest theme followed by mobile, fintech, and cloud.

GlobalData, the leading data and analytics company notes that there were 72% more TMT IPOs in 2021 compared to 2020 and the total proceeds of TMT IPOs were nearly 2.5 times higher in 2021 than the previous year.

Priya Toppo, Thematic Research Analyst at GlobalData, comments: “Despite the continued effects of the pandemic, three of the quarters in 2021 saw higher TMT IPO proceeds compared to any quarter in the last four years. The most lucrative themes for investors in TMT IPOs over the last four years were cloud, fintech, cybersecurity, mobile, and gaming.

“Cutting-edge technologies such as electric vehicles, digital media, healthtech, Internet of Things (IoT), gaming, artificial intelligence (AI), and cybersecurity have been moderately successful in raising capital. By contrast, we have only just started seeing listings of early-stage technologies like blockchain, quantum computing, metaverse, and the space economy.” 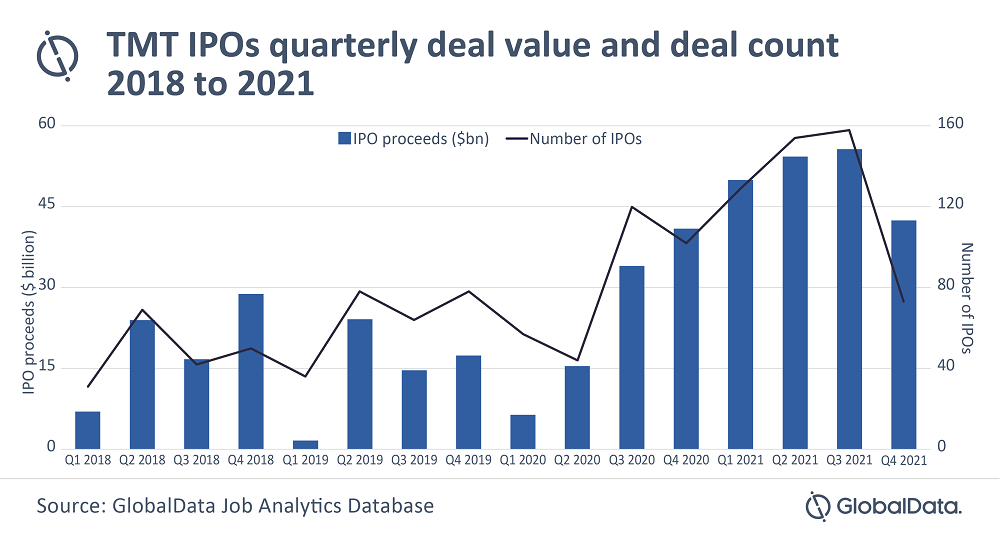 GlobalData’s latest report, ‘Tech, Media, and Telecom IPO Themes 2018 to 2021 – Thematic Research’, reveals that 2021 was a record year for billion-dollar TMT IPOs. This indicates that not only is TMT IPO activity increasing, but TMT companies are raising larger amounts in their listings.

Toppo continues: “To put the current levels of mega deals into perspective, over the three years 2018 to 2020, the equity proceeds from 45 TMT IPO listings each raised $1 billion or more. In 2021 alone 53 listings have each raised this amount.”

Rivian’s was the biggest TMT IPO listing raising $11.9 billion in the US in November 2021. It is followed by two Chinese IPOs, China Telecom’s listing in Shanghai which raised $8.4 billion and Kuaishou Technology’s listing in Hong Kong which raised $5.3 billion.