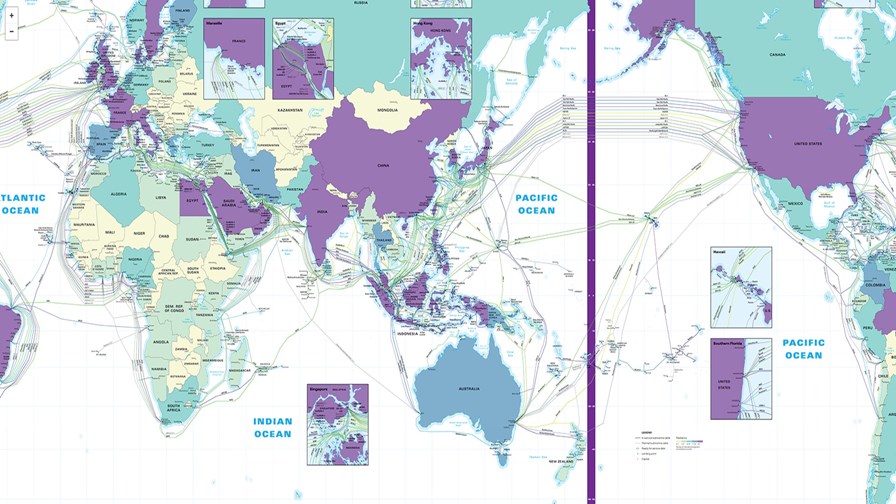 Telegeography’s  global submarine cable map reveals the extent to which  fibre now circles the globe and where the capacity is most concentrated. The transatlantic routes are still thick with cable (Brunel would probably choke on his cornflakes if he could see it), but the tangle of cables centred on SouthEast Asia is a stunning testament to the growth and influence of that region. And the submarine scene is  only just warming up.

Telegeography says its research has revealed plans for more than $8 billion in new cable investments over the next three years. It claims its maps can yield insights into 464 global cables and 1,245 landing stations with a combined length of over 1.3 million kms.

Telegeography talks of a ‘surge’ in cable construction from mega content providers such as Amazon, Google and Microsoft and their hyper-scale clouds, which has accelerated the market greatly. But the growth is broader than that. Telegeography claims that content providers’ share of total capacity has shot up, having accounted for less than 10% prior to 2012 it now stands at 66% in 2020.

And the major gobblers of new capacity - Amazon, Google, Facebook, and Microsoft - are now taking an active role by driving projects and route prioritization with Google alone having made more than 15 subsea cable investments globally at this point.

Telegeography claims the map itself can be made to surface insights. Of the 464 cables displayed in this 2021 edition of this map (above), 428 are active and 36 are planned. Out of these planned cables, 19 are brand new to TeleGeography’s map, boasting a combined length 103,348 km. There is much more in the pipeline over the next three years with around $1.6 billion in new cables due to be launched.

TeleGeography says the  Submarine Cable Map is available to order as a physical ‘art piece’ or to explore as an interactive version for reference. View the interactive map here.