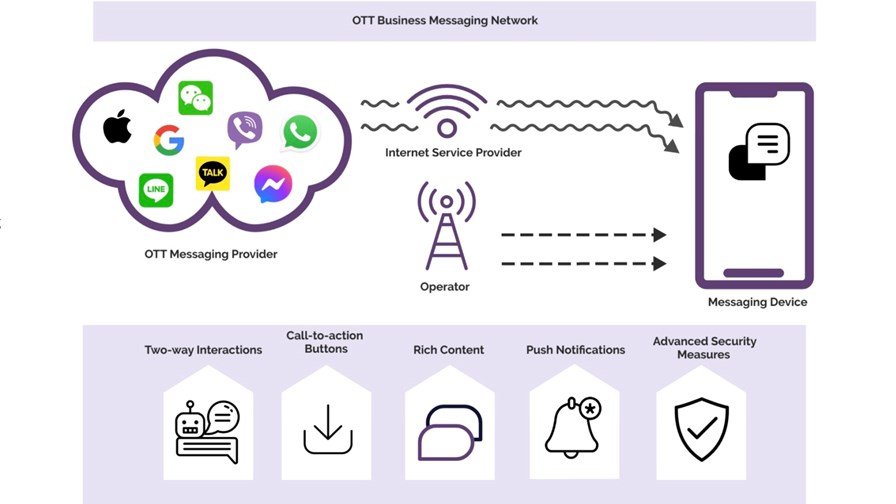 The number of business messages sent via over-the-top (OTT) channels is expected to nearly triple in the next five years, Juniper Research has estimated, putting further pressure on mobile operators to make gains from established communications channels, such as SMS.

In its latest forecast, the research house predicted that global OTT business messaging traffic will increase from 93 billion messages to 254 billion by 2027, representing a 172% rise. According to the company, the growth will be driven by “increased availability of open OTT messaging APIs [application programming interfaces] and competitive pricing models”, which will create “a viable rich media alternative to established operator-led channels, such as SMS”.

Unsurprisingly, pricing is perceived as the biggest motivator for enterprises to switch from operator-led messaging channels, which include SMS and rich communication services (RCS), to OTT messaging apps (such as Facebook’s Messenger and WhatsApp, Tencent’s WeChat and Rakuten’s Viber).

“For end users, OTT provides a no-cost alternative to SMS and RCS messaging”, while for enterprises, OTT platforms present a low-cost alternative, as businesses are not being charged per message or conversation from operators.

Additionally, the pricing model of OTT messaging is identified as being “consistently low” and “far less volatile” compared with SMS, Juniper Research argued.

“High-spending” enterprises are expected to increasingly leverage OTT business services for their “advanced security and rich media properties”, as well as their ability to deliver features such as brand authentication.

There is also the security factor. According to Juniper Research, the use of “strict channel verification systems” by OTT messaging service platform operators will be “key” to ensuring communications are “not susceptible to the same fraudulent activity found on channels such as SMS”.