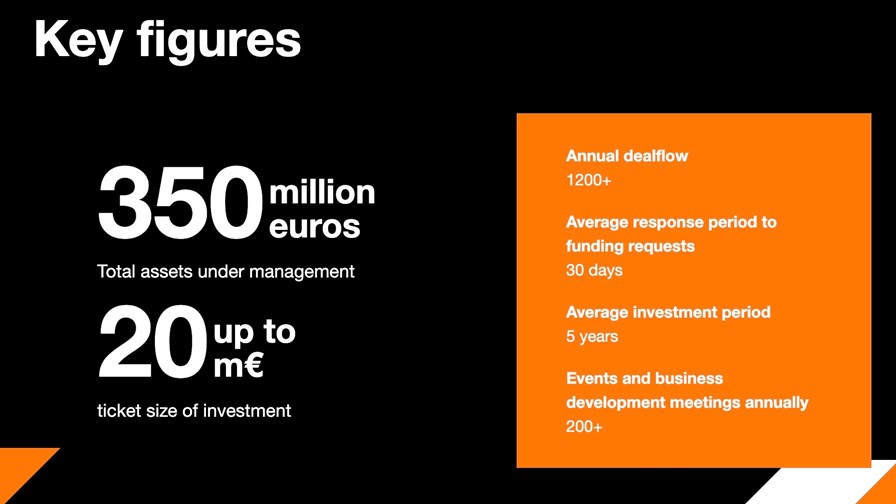 Orange has set its stall out as a major investor in the digital startup world with the creation of Orange Ventures, a wholly-owned but legally separate entity that has been handed decision-making autonomy, an “allocation” of €350 million and an existing portfolio of startups to nurture.

The new unit takes over from Orange Digital Ventures unit that was launched in 2015, and which had an allocation of €100 million.

Now that pot has grown by 250%, making it one of the top 10 corporate investment funds in Europe, and the team of 20 staff has a mandate to invest in emerging companies “in areas traditional to Orange expertise such as connectivity, cybersecurity, the digital enterprise, and innovative financial services, as well as new territories that the group is exploring, like e-health.”

With offices in Paris And Dakar, Orange Ventures will invest up to €20 million per financing round in companies “at all stages of maturity, from seed stage start-ups in Africa and the Middle East, to more mature companies in Europe and the United States,” it noted in this press release.

It has an office in Dakar, Senegal, as Orange has a Digital Center based there and is already actively engaged with regional startups via its Seed Challenge, which announced its latest crop of winners in November 2020. The operator is increasingly active in the Middle East and African communications sector, generating annual revenues of more than €5 billion from 126 million mobile customers in 18 markets in the region (including 14 in sub-Saharan Africa): Orange Money is a rapidly growing service and the popularity of smartphone-based digital apps in the region shows there is plenty of potential for new digital developments that can have a major impact on users.

It’s hard to tell what to expect, though. While Orange Ventures has been given a €350 million investment fund, it’s not clear (so far…. we’re awaiting a response) whether that is a fresh warchest or if that allocation includes existing investments. And Orange isn’t revealing how much was invested during 2020. But it certainly considers a lot of pitches – more than 1,200 per year in fact.

Orange Ventures also comes with a promise to differentiate itself by offering its portfolio companies “a highly structured process for exploring and creating flexible and optional synergies between Orange and start-ups.”

Quite how that manifests itself for the companies being funded is hard to tell.

What would be really helpful would be an organization that could help develop a new model of engagement between portfolio startups and the telcos, a model that would bypass the traditional and increasingly outdated RFI/RFQ processes that eat up time, effort and money without any guarantee of a successful outcome: Maybe such a scheme is part of the “flexible and optional synergies” referenced.

So could Orange Ventures help usher in a new era of telco investments that can help make a difference in the transformation of service providers to become cloud-oriented, proactive organizations unencumbered by red tape and inflexible processes? It certainly shows some willing to invest in startups that can help deliver the double whammy of a return-on-investment and helping to move the needle on telco cloud/5G developments (Weaveworks would be an example in this instance).

We’ll track Orange Ventures to see if it can make a real impact worthy of its enlarged fund.