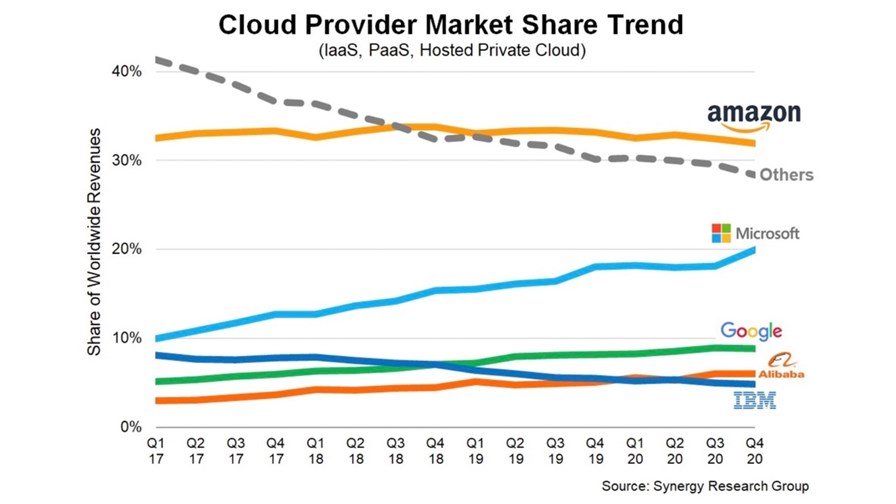 The news that AWS boss Andy Jassy - widely credited as the brains behind its astonishing rise - has been appointed as Amazon’s incoming CEO, stepping into the hot seat when the incumbent Jeff Bezos kicks himself upstairs to become executive chairman, comes at an interesting moment.

We’re hopefully seeing the end of a pandemic, its the beginning of a new US presidential administration and, perhaps, a political brake might be put on the runaway tech powers Amazon, Google, Facebook.

So who is going to head AWS, cloud market leader, in the face of what could be radical changes to the market as we know it? Should the new boss, whoever he or she is, continue putting the hyper into ‘hyperscale’? Or has the cloud now entered a new ‘multi-cloud’ phase which might demand adjustments to the relentless drive for growth that has characterised the success of both Amazon, the online shop, and AWS, the cloud infrastructure champion?

Tom Krazit from online publication Protocol.com reckons he knows who the new AWS chief will be and why he’ll likely ascend. He writes that he can’t imagine why Jassy (and Bezos) would bring in an outsider to mess with the culture and approach of Amazon at this stage, so all the signs, says Krazit, point to an insider, and Krazit’s pick is Matt Garman, the current leader of the AWS sales organization and a 14-year veteran of the company.

"The key question will be how Jassy manages some of the inevitable bumps in the road Amazon will face with issues like antitrust, workers’ rights and employee activism," says Nicholas McQuire, SVP Enterprise Research at CCS Insight.

Indeed, antitrust knives are currently being sharpened in both the US and Europe, and there is no sign that the actual underlying growth of the cloud is in any way slowing. Far from it, according to Danielle Royston, founder and CEO at TelcoDR, and a TelecomTV regular.

“The growth across all three big clouds - AWS, Azure and Google - is indicative of the huge market that is nowhere close to slowing down. Public cloud is powering the digital transformations sweeping across every industry, including telco,” she observes.

All three hyperscalers have now announced their end-of-2020 earnings, so this is a good time to stack them up, says Royston.

“Market leader Amazon reported earnings and shared the news that AWS has a $51 billion run rate that’s growing 28% YoY. Compare this to Microsoft’s Azure, which has about a $29 billion run rate and growing at an estimated 48% YoY, and it’s clear that these two hyperscalers occupy the top spots in cloud leadership.

“Also reporting earnings yesterday was Google, which is coming in third with a $15 billion run rate growing 47% YoY [note that Google Cloud numbers includes GCP and GSuite]. Google also released an impressive customer announcement with Ford, and so while it’s in third place, it’s not going away without a fight.”

Those growth rates are astonishing for any year, but to have such huge growth increases in 2020 only serves to show that cloud is the way forward.

Royston points out that while telcos “may be one of the last industries to the [cloud] party, they now need to go ‘all in’ with their public cloud strategies. Telcos need to stop kicking the tyres, pick an application, learn about the public cloud, and get it moved over,” she states. “The ‘pay as you go’ optionality the public cloud gives you allows for all the experimentation you need to understand how these ecosystems work. If you aren’t already working with a public cloud - the time to figure it out is now,” says the TelcoDR chief, who is one of the more vocal supporters of public cloud adoption by telcos.

Cloud spending has zoomed on

Royston’s analysis of a rush to the cloud is backed up by new data from Synergy Research Group. It shows that Q4 enterprise spending on cloud infrastructure services was just over $37 billion, $4 billion higher than the previous quarter and up 35% from the fourth quarter of 2019. Notably, for the second successive quarter, the year-on-year growth rate increased, and it has taken just nine quarters for the market to double in size - most unusual for a huge supertanker-sized market, which cloud has now become.

But things are happening inside the cloud that might spell monopoly trouble up the track.

In fact Microsoft, Google and Alibaba have all steadily gained market share over the last four years, claims Synergy Research Group, though not at the expense of market leader AWS whose market share has stayed in the 32-34% band throughout that four-year period.

“The market share losers have been the large group of smaller cloud providers, who collectively have lost 13 percentage points of market share over the last 16 quarters. Among the long tail of small cloud providers or large companies with only a small position in the market, the most prominent companies are IBM, Salesforce, Tencent, Oracle, NTT, Baidu, SAP, Fujitsu and Rackspace,” points out the Synergy team (see chart above).

The question is: how unbeatable is scale in this market? So far scale, in the shape of AWS, Azure and Google, has swept all before it and it now looks as though a surging public cloud, where big is good and huge is even better, is capable of squeezing out most of the competition, if allowed.

Perhaps the rise of multi-cloud, and the tools to support it, will enable users to scatter their cloud workloads across several physical infrastructures in a way that injects at least some competition into a market that might otherwise coalesce around three big global providers.