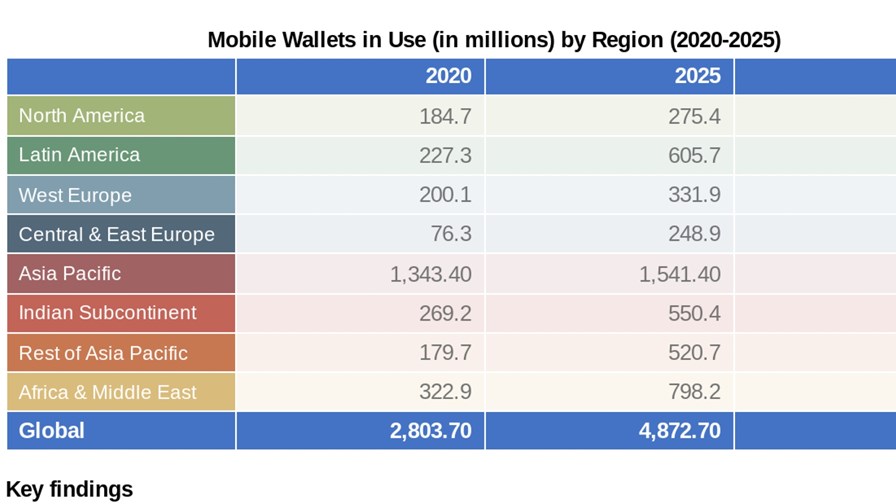 The numbers indicate that mobile wallets are going to be in the virtual pockets of more than half the world by 2025. At least that’s according to a mobile wallet report from global mobile payments network, Boku, in partnership with Juniper Research, which forecasts what can only be described as an astounding growth rate.

Many telcos have been circling the mobile money opportunity for years. Some, like France’s Orange, have plunged in and found success, but it’s fair to say that the mobile wallet has not yet proved to be the ‘unicorn’ application/service that many in the telecom industry in Europe have trained themselves into believing is required if it’s to justify the investment.. at least to now.

Meanwhile, the smartphone OEMs have grasped the opportunity. They’re looking mostly to win engagement on their platforms for users, rather than take a chunk of the revenues. But the growth is there and is accelerating.

A quick definitions recap: mobile wallets are essentially a way of paying for things electronically using a smartphone (usually) and short range radio technology (mostly). There are two categories of mobile wallet. The first is based on credit/debit cards. The cards can have an embedded chip which need only be waved at a contactless terminal to make a (usually small) payment. Because a card-centric payment system already existed in many ‘advanced’ markets (Europe and N. America), so-called OEM Pay Services like Apple/Google/Samsung Pay systems also based themselves on the card where cards were already entrenched and understood.

The other sort of mobile wallet is the so-called ‘stored value’ wallet used in much of the rest of the world where payment cards have never reached the popularity evident in the US and Europe. These systems have been built outside the payment card ecosystem, and are used primarily as a cash replacement, charged up from bank accounts or p2p payments and tending to use QR codes and a mobile device to execute a transaction.

Here are the key global statistics (see the chart above)

At the end of 2020 there were over 2.8 billion mobile wallets at large in the world. By 2025 this total is expected to rise to 4.8 billion in use by the end of 2024.  In 2019, mobile wallets overtook credit cards to become the most widely used payment type globally. The shift to online driven by the pandemic has further accelerated adoption.

The global growth is extremely variable, with Asia Pacific growing by just 2.8% per year to 2025 and other markets tucking away 21% to 26%. However, the tiny Chinese growth number is because China is already a mature mobile wallet market.  Japan, Korea and Taiwan, however, will continue their hockey-stick growth and will hit 98.4% market penetration by 2025. The upshot is that AsiaPac is expected to grow from today’s 1.3 billion to ‘just’ 1.5 billion over the next 5 years. Meanwhile Western Europe, which already has 200 million wallet users, is expecting to grow to 331 million users by 2025.

In Asia, says the report, the big Chinese online retailers have grasped the nettle (hence the saturation of the mobile pay market) and are now moving into other Asian markets. WeChat Pay was authorized for use in Indonesia and has already expended into into several emerging markets, including select countries in Africa; Alipay’s parent company, Ant Financial, has taken a stake in the Pakistani mobile money platform bKash, as well as operating in Hong Kong, Japan, Singapore, South Korea, Vietnam and Australia, as well as markets in Europe and North America.

All this growth means that mobile wallets are bringing billions of consumers into digital commerce for the first time. The report says mobile payments, both in the form of mobile money and now with modern, app-based mobile wallets, have been a catalyst for bringing billions of new consumers into the digital economy, and enabling them to transact online for the first time, very often as an alternative to a first bank account, so while the unbanked rates in these regions remain high, smartphone penetration now outpaces bank accounts, enabling more and more consumers to leapfrog from cash to sophisticated, online digital financial services.