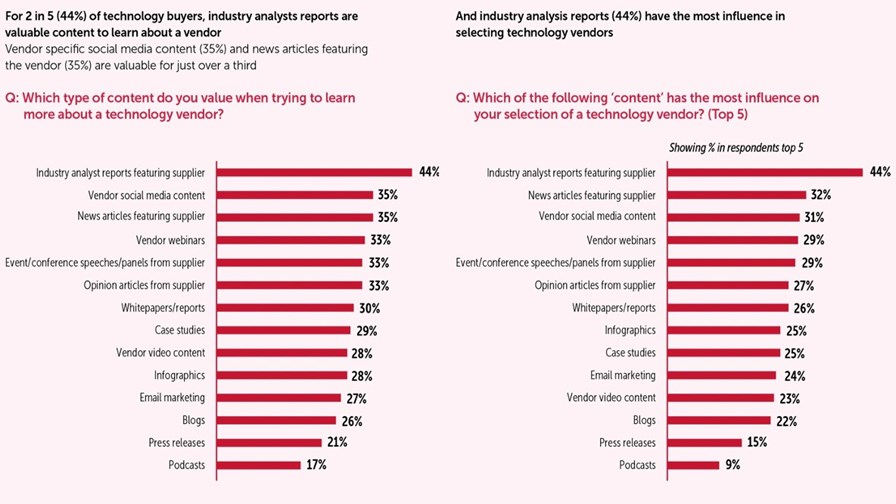 Network operator procurement processes are notoriously challenging for vendors, all the way from simply getting considered for RFI/P (request for information/proposal) to contract negotiations and payment/delivery terms: A lot of noise has been made in the past year about making such processes simpler and more relevant to an increasingly cloud-oriented market, and rightly so.

A new report, Navigating telco turbulence: lessons for vendor marketing, from B2B technology public relations agency CC Group, has taken a close look at the initial part of that process – how vendors get noticed and included in the initial stages of engagement with network operators.

The resulting, and impressive, report, based on a survey of 101 technology buyers in the telecoms industry (from 10 countries across APAC, Europe and the Americas), doesn’t provide any major shocks, but delivers a level of insight that is rarely seen in public documents and shows the level of influence that industry analysts and trade media can have.

For example, the telecom industry trade media and more general business technology media are the most influential channels for creating awareness of vendors amongst network operators, the survey finds.

When it comes to channels that generally influence telcos to select vendors for their RFP processes, internal business analysts came out clearly on top in terms of influential channels, with 57% selecting as either a deciding factor or major influence. This, though, is followed by a selection of channels with little to choose between them, including web searches (53%), industry analysts (53%), business/national media (51%), involvement/collaboration within an industry association working/networking group (50%), trade media (50%), peers (colleague or equivalent at a similar business – 50%) and industry events (49%).

Taking that process a little further, the survey respondents were asked which channels had a ‘proven impact’ on such decisions ie. if they had ever been led to shortlist a particular vendor for an RFP process as a direct result of a particular channel. In this instance, industry analysts came out on top, ahead of internal business analysts.

For the vendors, which channels are the most influential in terms of getting noticed? When aiming to learn about vendors, industry analyst reports are by far the most impactful, followed, interestingly, by vendor social media content and news articles that features vendors, which come in slightly ahead of webinars.

In terms of the “content” that has the most influence on the selection of a technology vendor, industry analyst reports and trade news articles come out on top. (See charts above.)

The report features a welter of information about how often telecom buyers read the trade media, if they have done so more during the pandemic (absolutely!), and how much more buyers have participated in digital industry events in the past year (in the absence of physical events).

It also reveals which industry analyst groups are the most influential (congratulations to Strategy Analytics) and which industry associations have collaborative processes that influence vendor selections (kudos to the Wireless Broadband Alliance).

For more on the report and to get access to the full report, check out this CC Group blog.