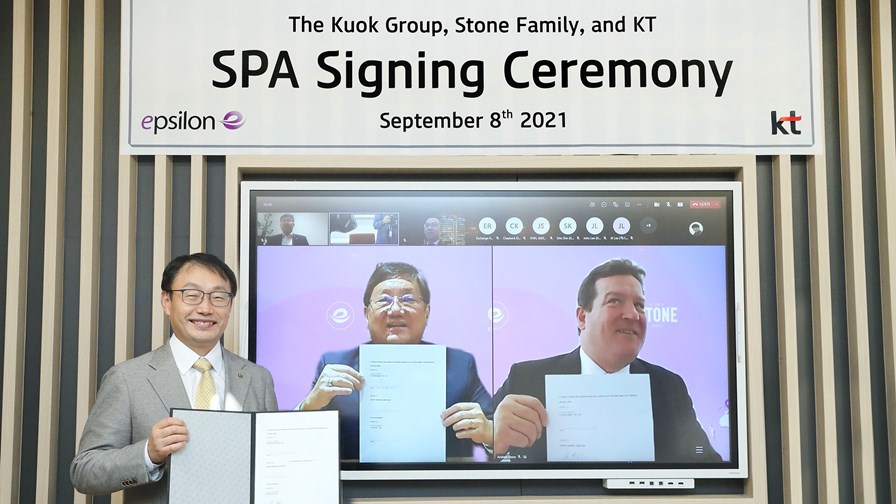 Eager to play a bigger role in the international data services market, South Korean operator KT Corp. has teamed up with Daishin Private Equity to acquire Epsilon Global Communications for $145 million from Asian conglomerate the Kuok Group (the majority owner) and the Stone Family in a move that’s set to kickstart a series of M&A moves.

Daishin participated as a “financial investor” by acquiring a minority 42% stake in Epsilon, notes KT, which has a 58% stake and management control.

Although founded in London in 2003, Epsilon is now headquartered in Singapore: It has more than 250 PoPs (points of presence) in 41 cities across 20 countries (including Mainland China), 75 of which it owns and more than 177 owned by partners; operates three data centres (London, New York and Singapore); and has its own in-house developed on-demand, network-as-a-service (NaaS) platform called Infiny.

That infrastructure and Epsilon’s “technical edge” will enable KT to expand its overseas services operations beyond Asia into Europe and North America and, as a result, “secure new customers such as domestic companies that enter overseas market and foreign companies that expand into Asia” by offering services such as international leased lines, data centre interconnect (DCI), multi-cloud networking and SD-WAN.

KT believes it is buying into a growing market for enterprise and wholesale data services, a market set to grow from about $62 billion in 2020 to about $86 billion in 2025.

In 2020, Epsilon generated revenues of about $51 million, about 64% of which came from data services, 22% from colocation services, and 14% from voice traffic.

The moves will also advance KT’s next generation service efforts, according to the operator. “Through the acquisition of Epsilon, KT will continue to accelerate the transformation into DIGICO, digital platform company, by combining the infrastructure and advanced services of global data business with artificial intelligence (AI) services (GiGA Genie) and robots (AI hotel, serving robot) into the digital transformation (DX) business,” it noted in this announcement.

And this may be the first of multiple such acquisitions, as KT says it plans to use Epsilon as a core platform for its 'bolt-on strategy' to expand its global data business. “Through Epsilon, KT has also established a strategy to become Asia's best DIGICO by pursuing strategic M&A (bolt-on M&A) with companies in essential fields of global communications, such as IT (information technology) platform solutions, data centres, and submarine optical cable infrastructure,” the operator noted in this statement.

"Epsilon provides mission-critical networking for global digital transformation and maximising the value of cloud for enterprise customers,” stated KT Corp’s CEO Hyeon-Mo Ku (pictured above, left, during the stock sale agreement signing ceremony). “It has a tremendous mix of technology, teams and innovation that are directly aligned with KT’s vision for enabling enterprises with digital platforms. Epsilon provides great value with its Infiny platform and global network, which offers customers an agile approach to global networking. Both companies share a vision for global digital transformation and the power that digital platforms have to change industries,” he added.

Epsilon CEO Michel Robert added: "The acquisition of Epsilon by KT is a great milestone on our company’s journey and recognition of the hard work of our teams across the globe. The timing is right to support Epsilon with new resources and the backing of a world-leader in telecommunications. We look forward to continuing to grow Epsilon and provide innovative solutions and experiences for our new and existing customers across the globe.”