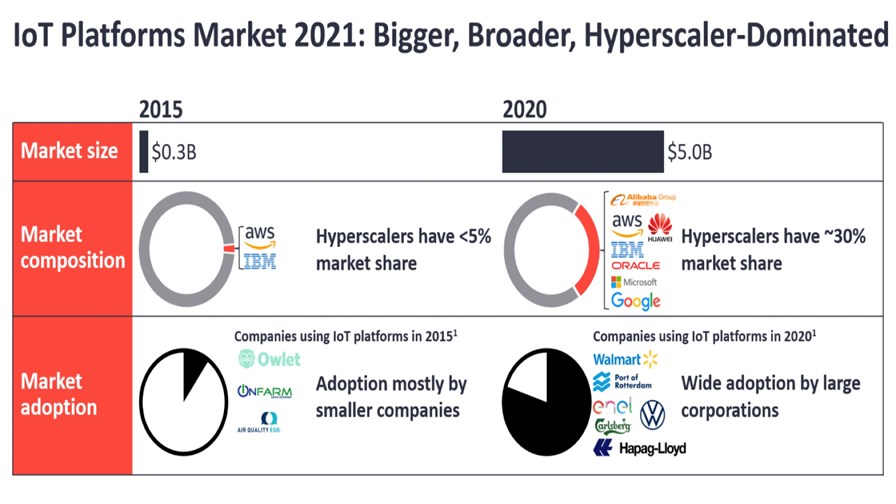 Nary a week goes by when there isn’t an announcement of a further encroachment (or welcome involvement, depending on your viewpoint) by the public cloud providers and associated technologies and business models, into what might once have been considered telco territory - at least on the connectivity side.

Global IoT market watcher IoT Analytics has just produced a comprehensive report on what’s happening with cloud/IoT and why hyperscale IoT platforms are driving the pace. Coincident with those observations, the European Commission is voicing concern about market dominance by the likes of Amazon, Apple and Google (although when it comes to the IoT, Amazon and Microsoft seem to be playing the lead domination role).

That warning came with the publication of the preliminary results of EC’s IoT competition probe.

“When we launched this sector inquiry, we were concerned that there might be a risk of gatekeepers emerging in this sector,” said Margrethe Vestager, vice-president at the European Commission. “From the first results published today, it appears that many in the sector share our concerns.”

So for good or ill, the big cloud players are now playing a huge role in the accelerated growth of the IoT industry. IoT Analytics says the $5 billion IoT platforms market is being driven primarily by the adoption of IoT by large enterprises and so, almost as a consequence, that development is dominated by the hyperscalers. In contrast, five years ago the IoT market was largely made up of smaller companies.

IoT Analytics says its own key findings are:

The question for telcos and DSPs is whether the hyperscale players and their IoT platforms will represent a threat or a capability to be tapped. Can they actually provide a platform for telcos to play a more enhanced role in the all-important  connectivity, onboarding and management of IoT projects. After all, many telcos are already onboarding themselves to Azure or AWS, not just for their OSS/BSS, but for a broad range of network functions too, and some are making radical investments. In the US, Dish has famously sealed a partnership with AWS to build a completely disaggregated, cloud-based 5G Open Radio Access Network.

Recent history might suggest that DSPs who want to stay in the game will need to get on board (as it were) with the hyperscalers.

Matthew Wopata, principal analyst at IoT Analytics, points out that “a large portion of the growth in the IoT platforms market can be attributed to rapid revenue growth realized by the cloud hyperscalers (most notably Microsoft and AWS), who were just barely dipping their toes into IoT back in early 2016. In fact, AWS IoT Core became generally available in December 2015 , and Microsoft’s Azure IoT Hub did not reach GA status until February 2016.  Companies like PTC, Ayla Networks, General Electric, and Cisco entered the IoT platforms market earlier than the cloud providers but eventually realized they needed to partner with (rather than compete with) [them] in order to stay relevant.“

Is there scope/hope for CSPs to take advantage of the public cloud to enable their IoT agendas? Or is this another cloud “trap” they should be wary of?