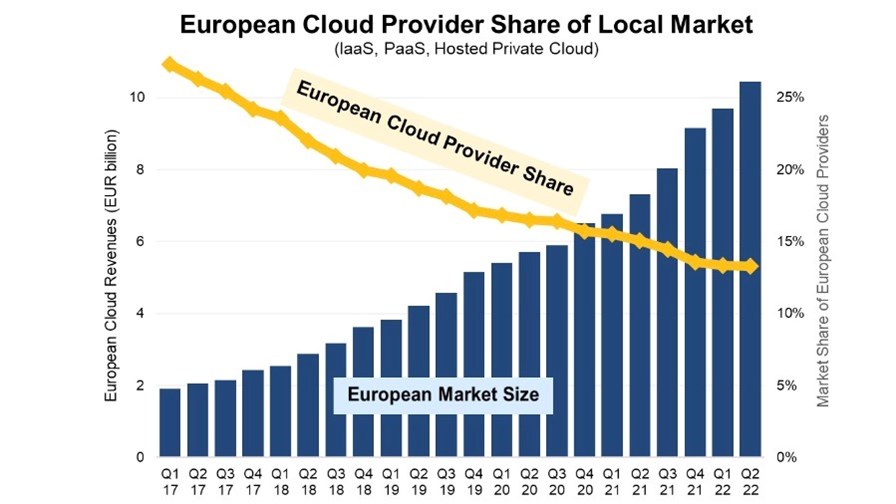 While Europe has aspirations to boost its home-grown tech and digital capabilities and reduce its reliance on suppliers from North America and Asia in many areas, including semiconductor production, courtesy of the European Chips Act, there’s one part of the sector where, it seems, reliance on overseas giants will need to be accepted as the inevitable status quo – cloud platforms and associated services. That’s important because, as we all know, enterprise strategies and the day-to-day lives of European citizens increasingly rely on access to reliable and secure cloud-enabled services and applications.

According to the latest analysis by the always excellent team at Synergy Research Group, the European cloud infrastructure services sector, which was worth €10.4bn (US$10.15bn) during the second quarter of 2022, has grown tremendously over the past five years and is now five times as big as it was in 2017. (The research firm includes IaaS, PaaS and hosted private cloud services in its analysis.)

But while European players have grown their cloud revenues by 167% during that period, their collective market share has shrunk to 13% from 27% as their growth lagged behind that of the overall market. Instead, US giants Amazon Web Services, Microsoft Azure and Google Cloud have boosted their influence and market share, and now account for 72% of the total European market, while the rest is accounted for by Asian cloud specialists and other, smaller US players which, collectively, are also losing market share to the big three.

Europe’s strongest cloud players are Germany’s Deutsche Telekom and SAP, each with 2% of Europe’s cloud services market, followed by OVHcloud, Telecom Italia (TIM), Orange, and a number of national and regional players.

During the most recent four quarters, the European cloud infrastructure services sector was worth about €27bn (US$26.3bn), up by 41% compared with the previous 12-month period.

“The cloud market is a game of scale where aspiring leaders have to place huge financial bets, must have a long-term view of investments and profitability, must maintain a focused determination to succeed, and must consistently achieve operational excellence. No European companies have come close to that set of criteria and the result is a market where the six leaders are all US companies,” noted John Dinsdale, a chief analyst at Synergy Research Group.

And here’s the analysis that should kill off any aspirations that European players might one day rule the region’s cloud infrastructure services sector.

And in an email to the trade media, Dinsdale notes that, between them, Amazon, Microsoft and Google now have more than 100 hyperscale datacentres operational in Europe. No local cloud providers have ever come “remotely close to challenging the big US cloud providers for leadership of European markets. That train left the station years ago and there were no European companies on it,” noted the analyst.

That’s something for policymakers to ponder and, maybe, try to ensure it isn’t repeated in the next big tech wave.