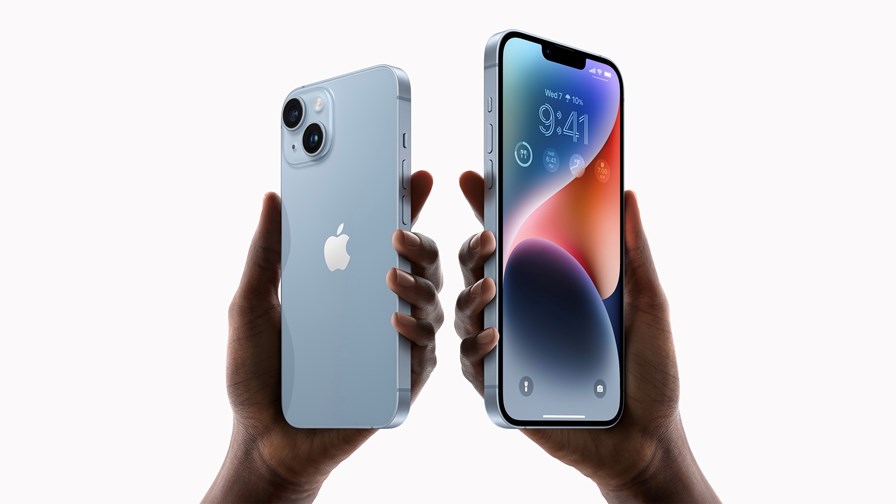 The Apple iPhone 14 and iPhone 14 Plus, which will not feature a SIM tray in models for the US market.

Apple’s decision to do away with physical SIM card support for new iPhone 14 devices sold in the US market is an “eSIM turning point in the mobile carrier industry” that is a “disaster for ill-prepared carriers” and a move that will have major ramifications across other markets too, according to the analyst team at industry research house GlobalData.

On Wednesday, the device giant unveiled the latest additions to its product portfolio, including a range of iPhone 14 models that, for devices sold in the US market, will be eSIM only. “eSIM allows users to easily connect or quickly transfer their existing plans digitally, is a more secure alternative to a physical SIM card, and allows for multiple cellular plans on a single device. iPhone 14 and iPhone 14 Plus remove the SIM tray for US models, enabling users to more quickly and easily set up their devices,” the company noted in its launch press release. Apple has long supported eSIM functionality, but has not previously designed any iPhones that do not support physical SIM cards.

The move is significant because it will force US mobile service providers to support eSIM (embedded SIM) activation if they want to have iPhone 14 users as customers, and that has a dramatic impact on customers as well as the service providers. While most current mobile services are enabled by physical SIM cards that are inserted into a mobile phone’s SIM tray and support services from a particular service provider, an eSIM is a programmable SIM card embedded into a device that allows users to switch to another connectivity provider more easily, so ‘churning’ from one operator to another becomes much quicker and easier.

The technology to enable eSIM activation has been around for years and has been supported in multiple devices developed by the likes of Apple and Samsung, but mobile operators have not been keen to support the functionality for fear of losing customers to a rival.

But the volume levels around eSIM have been edging higher and higher in recent months and, effectively, just got cranked up to 11 by Apple.

Apple’s move, while limited to one new iPhone model in one (albeit major) market, signals “the start of a new era of digital connectivity competition”, according to GlobalData, whose technology service director Emma Mohr-McClune saw this move coming.

“Back in January of this year, we were the first to predict that the future iPhone 14 model would be launched with an eSIM-only variant, but back then surprisingly few global carriers wanted to think through the full competitive consequences of such a scenario”, noted Mohr-McClune in a press release issued following the Apple product launch.

And the move will send shock waves across the entire mobile sector, she believes.

“For carriers outside the US, the first eSIM-only iPhone launch in the US is a clear signal of what’s coming to carriers everywhere, and now sooner rather than later. US carriers no longer have the luxury of waiting out the eSIM market; they’ll have to deal with the eSIM-only iPhone 14, whether they like it or not. Some are arguably better prepared than others, but many of the smaller, local and prepaid carriers – including smaller players serving the business community – are facing a furious game of catch-up,” added the analyst.

GlobalData expects US operators to get their eSIM act together quickly. “For carriers, nothing focuses the mind like a clear churn risk, and an inability to adequately support a new generation of iPhone 14 customers with a perfect-first-time eSIM onboarding and profile self-management experience is a business disaster waiting to happen. But, as with the launch of any new disruptive technology, there are both opportunities and threats for carriers, and it will be interesting to see how US carriers now respond to the challenge” noted the GlobalData team.

But one US carrier, which had the foresight to act early, will be feeling very smug today, as Apple’s announcement comes only a week after T-Mobile US rocked the US mobile market by announcing support for eSIM service activation in an effort to poach customers from rivals AT&T and Verizon.

And it comes only a few days after new industry research results suggested that consumers are keen on the service provider selection flexibility that eSIM capabilities enable. “Apple’s decision to introduce an eSIM-only version of the iPhone 14 represents a watershed, game-changing moment for seamless connectivity,” stated Anthony Goonetilleke, group president of technology and head of strategy at Amdocs which, with perhaps not uncanny timing, was the company that commissioned the aforementioned survey and has an eSIM management solution to sell to mobile operators.

“We’re already seeing momentum towards eSIM across the telecoms sector and we expect this to grow as consumers, original equipment manufacturers (OEMs) and communications service providers increasingly realise the full scale of the next-generation experiences and possibilities unleashed by this exciting new technology… Apple’s influence and reach is such that this could be the tipping point for the eSIM revolution,” added Goonetilleke.

So what happens next? GlobalData’s Mohr-McClune expects mobile service providers to announce “eSIM test-drive offers” that enable users to trial the mobile services on offer from competing networks, and she expects Apple’s move to kickstart a new era of digital-enabled customer behaviour as users “learn how to self-manage multiple eSIM profiles on one device, making it easier to handle various personas and numbers, such as a personal/work accounts.” The analyst has a number of predictions about what Apple’s move will mean for the market – you can read them all in GlobalData’s full announcement.