Tablets Shaping Up for Growth in 2016, says Strategy Analytics

Apple, Samsung, and Microsoft have refocused what the Tablet can do; market to grow 7 percent in 2016

Boston, MA - October 5, 2015 - There is immense opportunity for new and replacement sales of Tablets, reversing a 4 percent decline in shipments in 2015 to 7 percent growth in 2016, according to the new “Tablets in a Better Shape for Renewed Growth in 2016” report from Strategy Analytics’ Tablet & Touchscreen Strategies (TTS) service. Consumer surveys show that Tablets and PCs are nearly equally desired among owners of both devices and with over 700 million of these devices beyond the midpoint of their lifecycles in 2015, the hard work put in by vendors like Apple, Microsoft, and Samsung to redefine the Tablet will bear fruit in 2016.

Peter King , Research Director, Tablet & Touchscreen Strategies service said, “As replacement cycles have lengthened for both Tablets and PCs in recent years, 2-in-1 Detachable Tablets have become affordable enough that they will compete for consumer spend of both products. A household could settle on a 2-in-1 Tablet for casual use, which can also transform into a dockable mini workstation when needed for more intensive activities. The existence of the '11-inch or more' Tablet screen size category is a great example of the expanding feature set and usage model of the Tablet as it plays into the prosumer and enterprise segments due to cost and functionality. Improved processor technologies from the likes of Intel, which enable Tablets to be more powerful, thinner, and lighter, are also driving the market.”

Eric Smith , Senior Analyst, Tablet & Touchscreen Strategies service added, “As reports swirl about the impending release of the Surface Pro 4, we see Microsoft leading the growing pack of professional grade Tablets running Windows 10. The release of Windows 10 in July provided opportunities at the high-end to better position Tablets against PCs on productivity needs and compatibility with the office setting. Opportunity abounds at the low-end as well, where White-Box vendors are already selling Ultra-Low price-tier 2-in-1 Tablets to compete against low-end PCs and Tablets for casual use, particularly well-suited in emerging markets for consumers new to the computing segment.” 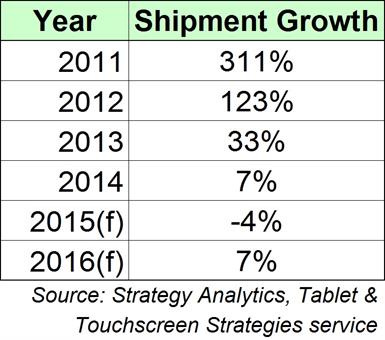 Fast growth in the early years means that hundreds of millions of Tablets will rapidly need upgrades due to old age in the next one to four years. Furthermore, new Tablet sales opportunities outside of the consumer market are being boosted by the work being done and partnerships being forged by vendors such as Apple, Samsung, Microsoft, and HP, focused on the needs of the enterprise.