FRAMINGHAM, Mass., November 3, 2017 – The third quarter of 2017 (3Q17) closed with 40 million tablets shipped globally, according to preliminary data from the International Data Corporation (IDC) Worldwide Quarterly Tablet Tracker. Growing demand for smartphones combined with the lengthening replacement cycle of tablets and strengthening position of traditional PCs left the tablet market in an awkward middle ground that it has not been able to escape. Growth in 3Q17 declined 5.4% year over year, marking the twelfth consecutive quarter of annual decline.

"There's a penchant for low-cost slates and this holds true even for premium vendors like Apple," said Jitesh Ubrani, senior research analyst with IDC's Worldwide Quarterly Mobile Device Trackers. "However, many of these low-cost slates are simply long-awaited replacements for consumers as first-time buyers are becoming harder to find and the overall installed base for these devices declines further in the coming years."

Meanwhile, growth in the detachable tablet market has been slower than expected as Apple and Microsoft are essentially the only two vendors supplying the category and other PC vendors champion the convertible PC form factor.

"In a recent IDC survey, owners of both convertibles and detachables stated they were far more inclined to recommend a convertible to another shopper than a detachable," said Linn Huang, research director, Devices & Displays. "Market momentum has steadily shifted away from the latter towards the former over the course of this year. The 2017 holiday season may prove to be a critical crossroad for the detachables category."

Although Apple still enjoys a substantial premium over competitors, the lower-priced iPad has helped it to cement the first-place position. The latest version of iOS has helped make iPads a more serious PC competitor than ever before but the need for legacy apps (especially in the commercial segment) and strong value offerings from other PC and mobile vendors has prevented iPads from becoming the primary computing device for the masses.

Samsung offers one of the broadest range of detachable tablets that includes multiple screen sizes and operating systems yet detachable tablets account for less than 10% of its shipments in the quarter. These high-priced, halo devices have led to Samsung's premium image but the company still relies heavily on the lower cost Tab A and E series. This may create long-term issues as rival tablet vendors often offer products at a better value.

Amazon.com 's aggressive hardware strategy in the tablet market has proven to be quite successful as the company managed to grow 38.7% on an annual basis. The low-cost hardware push has always been a means to create a long-standing and ongoing relationship with end users. To that extent, Amazon even offered the 7-inch tablet for under $30 during the Prime Day Sale.

Huawei and Lenovo managed to tie for fourth place as both companies have maintained a similar strategy of focusing on low-cost devices in Asia/Pacific and Western Europe. Huawei has managed to maintain some differentiation by concentrating on cellular-enabled tablets while Lenovo recently launched the Tab 4 lineup, which offers competitive specs and features at a great value. 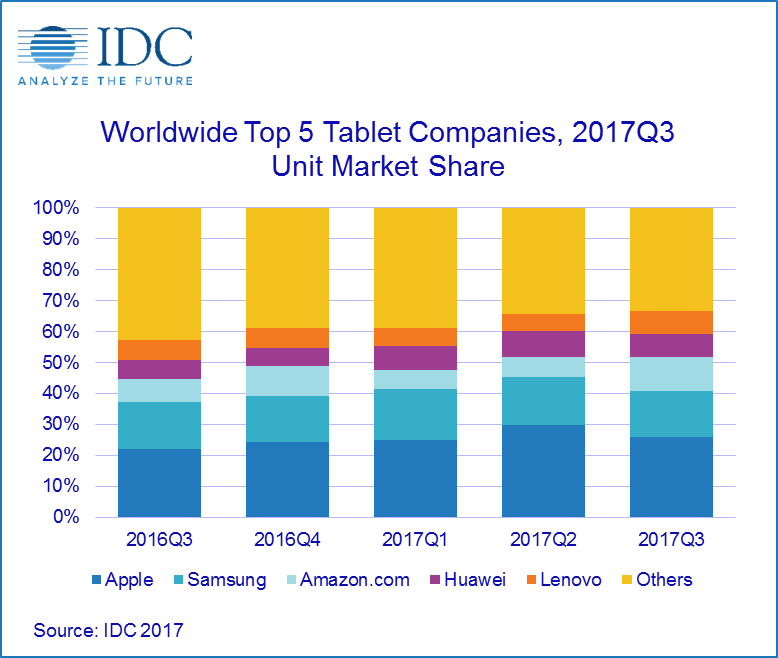