Boston, MA - November 24, 2015 - According to the latest research from Strategy Analytics, at least three major global shifts are predicted to take place in the smartphone market during 2016. Smartphone financing will become the norm, Indonesia will join India as the next big smartphone market after China, and smartwatches will start to cannibalize fitness bands.

“Smartphone instalment plans and lease-to-own programs will go global in 2016, as OEMs take programs that first gained traction in the United States to other markets. Apple iPhone Upgrade Program and ZTE SmartPay are among early leaders in using direct financing to boost smartphone shipments or enhance customer stickiness. Operators, like Sprint, will feel the squeeze from vendor-led financing and will need to respond vigorously with their own customer loyalty and lease-to-own programs.”

“In wearables, the Apple Watch will prove a relatively popular accessory for smartphone owners during the busy Q4 2015 holiday season and into 2016 when the next generation of smartwatch models will be launched. We forecast global smartwatch shipments to grow 57 percent in 2016, while fitness bands will grow just 8 percent next year. Smartwatches optimized for health and fitness, such as the Moto 360 Sport, are emerging as strong alternatives to Fitbit and other players in the fitness band category. Just as multi-function smartphones displaced most feature phones, multi-function smartwatches that support fitness apps, social feeds and music-to-go will eventually cannibalize mid-to-high-tier fitness bands.” 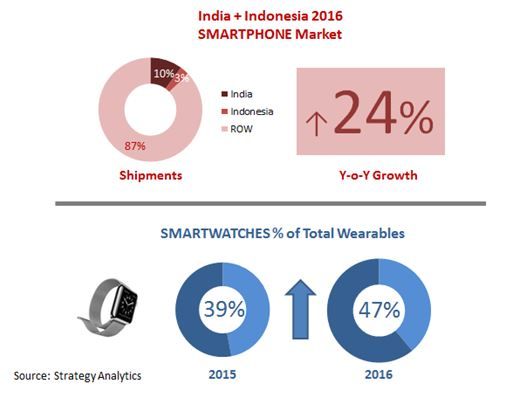 The full report, Top 10 Mobile Device Predictions for 2016 , is published by the Strategy Analytics Wireless Device Strategies (WDS) service, details of which can be found here: http://tinyurl.com/oyxmrno.