FRAMINGHAM, Mass. December 11, 2018 – According to the International Data Corporation (IDC) Worldwide Quarterly Mobile Phone Tracker, worldwide smartphone shipments are expected to decline by 3% in 2018 before returning to low single-digit growth in 2019 and through 2022. While the on-going U.S.-China trade war has the industry on edge, IDC still believes that continued developments from emerging markets, mixed with potential around 5G and new product form factors, will bring the smartphone market back to positive growth.

Smartphone shipments are expected to drop to 1.42 billion units in 2018, down from 1.47 billion in 2017. However, IDC expects year-over-year shipment growth of 2.6% in 2019. Over the long-term, smartphone shipments are forecast to reach 1.57 billion units in 2022. From a geographic perspective, the China market, which represented 30% of total smartphone shipments in 2017, is finally showing signs of recovery. While the world's largest market is still forecast to be down 8.8% in 2018 (worse than the 2017 downturn), IDC anticipates a flat 2019, then back to positive territory through 2022. The U.S. is also forecast to return to positive growth in 2019 (up 2.1% year over year) after experiencing a decline in 2018.

The slow revival of China was one of the reasons for low growth in Q3 2018 and this slowdown will persist into Q1 2019 as the market is expected to drop by 3% in Q4 2018. Furthermore, the recently lifted U.S. ban on ZTE had an impact on shipments in Q3 2018 and created a sizable gap that is yet to be filled heading into 2019.

"With many of the large global companies focusing on high-end product launches, hoping to draw in consumers looking to upgrade based on specifications and premium devices, we can expect head-to-head competition within this segment during the holiday quarter and into 2019 to be exceptionally high," said Sangeetika Srivastava, senior research analyst with IDC's Worldwide Mobile Device Trackers.

Though 2018 has fallen below expectations so far, the worldwide smartphone market is set to pick up on the shift toward larger screens and ultra-high-end devices. All the big players have further built out their portfolios with bigger screens and higher-end smartphones, including Apple’s new launch in September. In Q3 2018, the 6-inch to less than 7-inch screen size band became the most prominent band for the first time with more than four times year-over-year growth. IDC believes that larger-screen smartphones (5.5 inches and above) will lead the charge with volumes of 947.1 million in 2018, accounting for 66.7% of all smartphones, up from 623.3 million units and 42.5% share in 2017. By 2022, shipments of these larger-screen smartphones will move up to 1.38 billion units or 87.7% of overall shipment volume.

"What we consider a so-called normal size smartphone has shifted dramatically in a few short years and while we are stretching the limits with bezel-less devices, the next big switch to flexible screens will test our imaginations even further," said Melissa Chau, associate research director with IDC's Worldwide Mobile Device Trackers. "While this category of device is still nascent and won't see major adoption in the year ahead, it's exciting to see changes to the standard monoblock we are all so used to carrying."

Android: Android’s smartphone share will remain stable at 85% throughout the forecast. Volumes are expected to grow at a five-year compound annual growth rate (CAGR) of 1.7% with shipments approaching 1.36 billion in 2022. Android is still the choice of the masses with no shift expected. Android average selling prices (ASPs) are estimated to grow by 9.6% in 2018 to US$258, up from US$235 in 2017. IDC expects this upward trajectory to continue through the forecast, but at a softened rate from 2019 and beyond. Not only are market players pushing upgraded specs and materials to offset decreasing replacement rates, but they are also serving the evolving consumer needs for better performance.

iOS: iOS smartphones are forecast to drop by 2.5% in 2018 to 210.4 million. The launch of expensive and bigger screen iOS smartphones in Q3 2018 helped Apple to raise its ASP, simultaneously making it somewhat difficult to increase shipments in the current market slump. IDC is forecasting iPhone shipments to grow at a five-year CAGR of 0.1%, reaching volumes of 217.3 million in 2022. Despite the challenges, there is no ambiguity that Apple will continue to lead the global premium market segment. 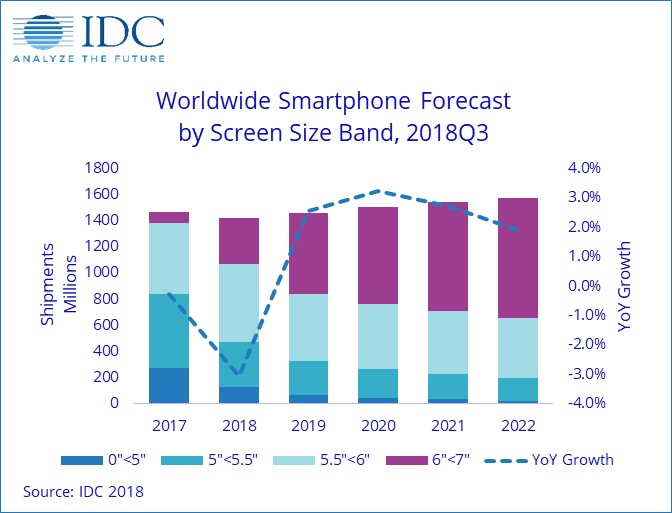