Boston, MA - December 6, 2016 – After two years of decline, the tablet market is showing signs of improvement as tablets become cost-effective computing devices for both entertainment and productivity purposes. Tablet shipments are projected to fall only 1% year-on-year in 2017, followed by moderate growth as demand for 2-in-1s, Windows Tablets, and enterprise sales lead the rebound, according to the new “Tablet Shipments, Installed Base and Penetration Forecast by Country 2010 - 2020: Q4 16 Update” report from Strategy Analytics’ Tablet & Touchscreen Strategies (TTS) service.

“In the second-half of 2016, we are seeing a reasonable decline in prices for 2-in-1 Tablets and premium-specced tablets meant for PC replacement in developing markets, which is beginning to have an effect on consumer demand. Vendors following this strategy, such as Apple, are beginning to show signs of resurgence.”

“Windows 10 has given vendors the power to position Tablets against PCs and given consumers the flexibility to do much of their daily activities on a 2-in-1 device. For prosumers and enterprise users, processors for tablets have become incredibly powerful and enable high-end tablets to compete head-to-head with many traditional PCs. Android slates will continue to play an important role in the market for low-cost entertainment devices, but until there is a serious shift toward multi-tasking, Android will continue to lose market share to Windows and iOS devices.” 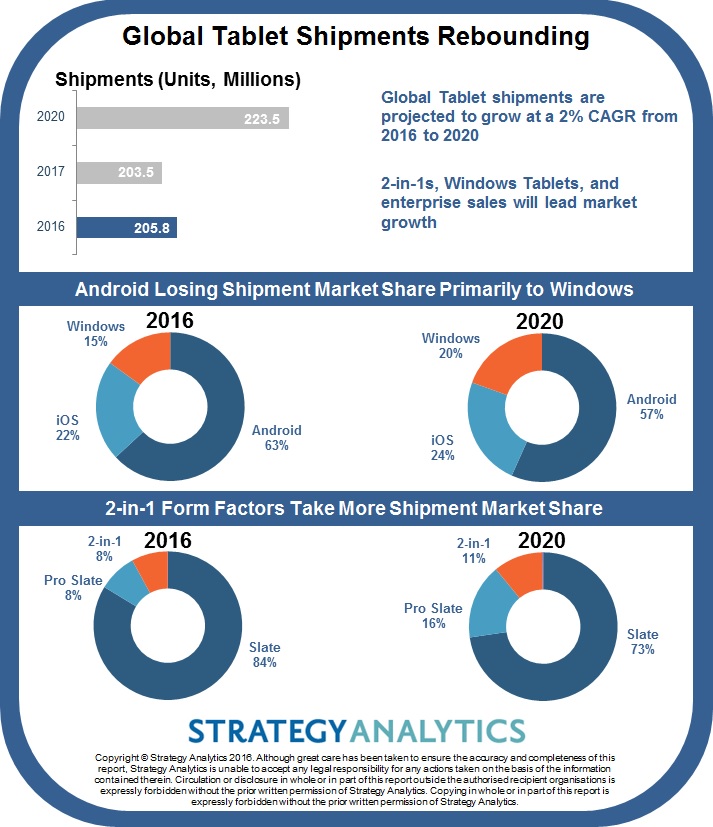 The 2-in-1/Pro Slate segment will grow at a 16% CAGR from 2016 to 2020 as prices fall to more reasonable levels. Surface Pro and iPad Pro are the flagship representations of how a tablet can perform as well as a PC, but many consumers don’t need that much power for day-to-day tasks—nor can most consumers afford the premium price tags they currently carry. Lower cost 2-in-1s have been around for years and took 8% market share in 2016. We expect Pro Slates, like those models mentioned above, to decline in price over the next several years and drive market penetration even further.

The Windows segment will grow at a 9% CAGR from 2016 to 2020 as Android falls 1% during same period. iOS tablet shipments are steadying and will show some improvement over the coming years as Apple’s efforts to sell iPad into enterprises pays off and consumers replace older iPads due to hardware and software innovation. Even though the newest version of Android (Nougat/7.0) has multi-window capabilities, it will take a long time for this to filter into the highly fragmented installed base and consumer mindshare, thus it will not be able to credibly compete with more productivity-capable iOS and Windows tablets. Until the long-fabled merge of the Android and Chrome OSes happens, we believe Android will largely remain an entertainment-focused platform—still forecast to occupy 57% of the market in 2020, despite these stagnant growth prospects. Amazon is a prime example of an Android vendor able to capitalize on high demand for low-cost entertainment-based slate tablets by making incremental revenue off the software and services in Amazon’s ecosystem after the device’s sale.

The non-consumer segment is forecast to climb at a 9% CAGR from 2016 to 2020 reflecting the importance of mobility in the enterprise. Driven by tablet adoption by individuals within the enterprise, companies will continue to refine their line-of-business applications and processes for the touchscreen paradigm and increase investments and deployments. Continued interest in the Microsoft Surface Pro tablet and its Windows 10 cousins produced by other leading mobile-first vendors and PC OEMs will drive more corporate-liable tablet interest, as Microsoft looks to shift its core PC OS business to more mobile-friendly device form factors and technologies. Apple's iPad Pro is also expected to boost corporate-liable tablet shipments, as businesses turn to the larger, more powerful iPad as a PC replacement for traveling employees.