PC Shipments Expected to Shrink Through 2016 as Currency Devaluations and Inventory Constraints Worsens Outlook, According to IDC

FRAMINGHAM, Mass., August 26, 2015 – Worldwide PC shipments are expected to fall by -8.7% in 2015 and not stabilize until 2017, according to the International Data Corporation (IDC) Worldwide Quarterly PC Tracker. The latest forecast has growth declining through 2016 – which will make five years of declining shipments. Growth should resume in 2017, led by the commercial market, while consumer volume continues a small decline through the end of the forecast in 2019.

Although IDC had expected the second quarter of 2015 to be a transition period as vendors prepare for Windows 10 systems in the second half of the year, final results nonetheless shrank even more than expected due to a stubbornly large inventory of notebooks from prior quarters and severe constraints posed by the decline of major currencies relative to the US Dollar.

In addition to economic issues, free upgrades of Windows 10, a relative dearth of newer models in the short term, and channels that are reluctant to take stock also makes the prospect of growth unlikely through 2016. Perhaps as a further sign of a broader pullback, mobile devices can no longer be the sole culprit for PCs demise. Except for smartphones, which are still growing, the combined volume of PCs, tablets, and smartphones is expected to grow only in the single digits from 2015 through 2019 as saturation and "good enough computing" sentiments spread even into tablets, which are expected to see further volume decline in 2015.

Looking beyond the near term, IDC remains optimistic a modest recovery should come in 2017, when the prospect of the next refresh cycle and the cessation of a free Windows 10 upgrade should provide opportunities in notebooks and commercial segments. In emerging regions, where consumer budgets have been divided across a myriad of devices, PC purchases are also expected to regain some interest.

"Although the shortcomings of the PC business are obvious, a silver lining is that the industry has continued to refine the more mobile aspects of personal computers – contributing to higher growth in Convertible & Ultraslim Notebooks," said Jay Chou, Senior Research Analyst, Worldwide PC Tracker. "The de-emphasis of touch on Windows 10 also paves the way for a more familiar experience and continuing unit growth on large-screen systems, particularly All-in-One PCs." 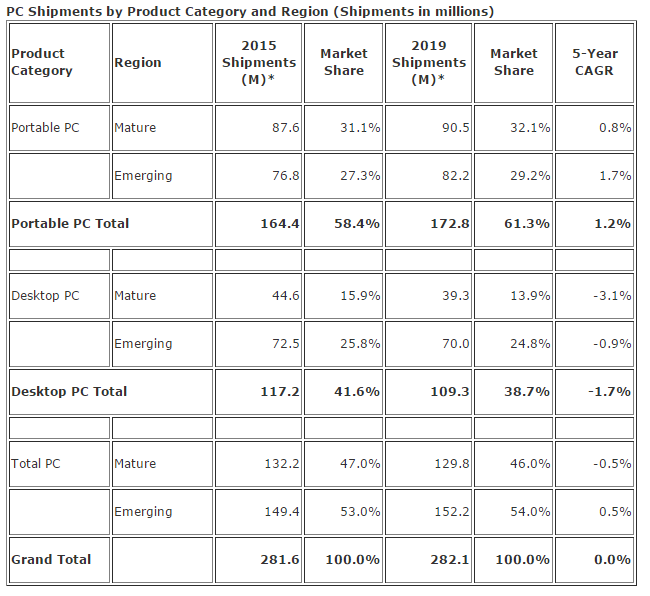 Taxonomy Note: PCs include Desktop, Mini Notebook and other Portable PCs which possess non-detachable keyboards, and do not include handhelds or tablets such as the Apple iPad, Microsoft Surface Pro, or Android Tablets.

IDC's Worldwide Quarterly PC Tracker gathers PC market data in more than 80 countries by vendor, form factor, brand, processor brand and speed, sales channel and user segment. The research includes historical and forecast trend analysis as well as price band and installed base data. For more information, or to subscribe to the research, please contact Kathy Nagamine at 650-350-6423 or knagamine@idc.com.

IDC Tracker products provide accurate and timely market size, vendor share, and forecasts for hundreds of technology markets from more than 100 countries around the globe. Using proprietary tools and research processes, IDC's Trackers are updated on a semiannual, quarterly, and monthly basis. Tracker results are delivered to clients in user-friendly excel deliverables and on-line query tools. The IDC Tracker Charts app allows users to view data charts from the most recent IDC Tracker products on their iPhone and iPad. The IDC Tracker Chart app is also available for Android Phones and Android Tablets.