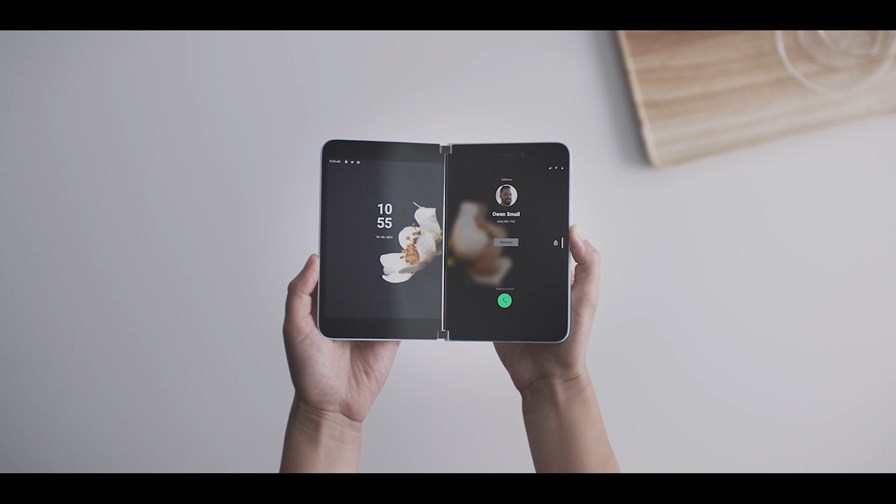 New videos have leaked that give a glimpse into how Microsoft's forthcoming Surface Duo, a dual-screen phone that claims not to be a phone, but definitely is a phone, will function.

Sadly, they also offer up a timely reminder of just how badly Microsoft has gone about tackling the mobile device market.

We'll come to that later. In the meantime, prolific leaker WalkingCat this week tweeted a video tantalisingly-titled 'Peek', which shows that when the portrait-flip-phone is opened slightly, users can glance – or peek, if you will – at the time and various notifications.

A second video shows how peek mode lets you see who is calling, after which you can decide whether to fully open the phone and take the call.

Nifty features, but in terms of appearance, Surface Duo, with its dual-screen rather than folding-screen set-up, looks like a device from two years ago. It makes sense in a way, because it has been more than two years since Microsoft pulled the plug on its mobile devices business.

Granted Surface Duo is being developed by the Surface team, which has been beavering away at products irrespective of Microsoft's presence or otherwise in the mobile phone market. But the Surface department's recent pedigree is tablets and laptops. Not smartphones.

Microsoft claims that Surface Duo is a communications device, not a phone. Whatever that means. It runs on Android; Android is first and foremost a smartphone platform; and Surface Duo can be used for phone calls. But it's not a phone, apparently.

Regardless of what it claims to be, there's no getting away from it: when you compare these latest videos to what has been unveiled lately by Samsung, Huawei and even Motorola, Microsoft's hardware design looks two years off the pace. It's no surprise. It could hardly be expected to out-innovate rivals that have been continually refreshing and upgrading their smartphone portfolios in its absence.

When Satya Nadella succeeded Steve Ballmer as Microsoft CEO in 2014, he unveiled a new mantra for the company: mobile first, cloud first. By mobile, he wasn't referring to Microsoft devices, but enabling mobile experiences on all sorts of devices thanks to Microsoft software and cloud.

Early into his tenure, it became clear that the Nokia mobile device unit Nadella inherited from his predecessor was not his preferred channel to customers. Rather it was faithful old desktop Windows – showcased by the Surface product line and licensed to OEMs – and the Azure cloud platform.

Microsoft did make a go of handsets, rebranding Nokia smartphones to Microsoft early into the Nadella era. But it was already clear that the Windows Phone OS didn't have the traction with app developers needed to close the gap with Android and iPhone.

After shipments slumped there were massive writedowns, restructurings and redundancies. Then came the sale of the feature phone business and manufacturing assets to HMD Global and Foxconn respectively. In late 2017, Microsoft announced it would stop making phones. Last December it ended support for Windows Phone 10.

Of course, this is just the recent history of Microsoft's chequered past in the mobile market.

Before the Nokia saga, Microsoft had a crack at the PDA market in the 90s with Windows CE, which evolved into Windows Mobile in the very early days of smartphones. HTC, Motorola, Sony Ericsson and Samsung were all at one stage making Windows Mobile devices.

Windows Mobile was niche, to say the least. There was no way it was going to compete against Symbian in the consumer market, and its enterprise credentials took a serious hit when BlackBerry came on the scene.

Already on the back foot, when Apple and Google revolutionised the consumer smartphone market in the mid-noughties, Microsoft didn't have an answer. And it never managed to come up with one either.

This year, Microsoft will sort of have another go, but it faces a major challenge, which is convincing developers to make apps that take full advantage of Surface Duo's dual-screen form factor.

Yes, Microsoft will make sure it ships with some cool versions of Office as well as some high-profile third-party apps. Surface Duo runs Android, so there is no question of there being third-party app makers out there. However, the market looks like it is going in a folding-screen, not dual-screen direction. If Microsoft's decision to pursue a different path makes it harder for developers to support Surface Duo, then they will probably pass on it.

Admittedly, LG is also chasing the dual-screen dream. This week it added to its dual-screen line-up with the V60 ThinQ 5G. However, LG hasn't exactly been lighting up the smartphone market in terms of unit volumes recently.

Samsung and – as it still stands at the moment – Huawei are app makers' bread and butter, accounting for more than half of annual Android smartphone shipments. They are the priority for app makers.

Microsoft's second major challenge is price. The Samsung Galaxy Z Flip is £1,300. The Motorola Razr is more than £1,100. The Huawei Mate Xs is more than £2,000. These all have foldable touchscreens. The price tag on the Surface Duo, which doesn't have the same cool factor because of its two-screen design, needs to be smaller. If it is anywhere near the same price bracket as the Z Flip, for example, then people will say it's too expensive given it doesn't come with a folding screen.

We'll find out more later this year: the Surface Duo is expected to go on sale in time for Christmas. Given Microsoft's track record in mobile, the likes of Samsung and Huawei probably aren't losing any sleep over it.