• Global slate tablet assembly industry trends show slate tablet assembly shipments dropped by 41% from the previous quarter, and 20% from last year, impacted by demand for large screen mobile phones. Taiwan ODM vendors made up approximately 34% of the global shipments, while ODM assembly vendors on the Chinese mainland accounted for almost 50%.

• Global detachable tablet assembly industry trends assembly shipments dropped by 35% from the previous quarter due to an off-peak season. However, boosted by continuous new product launches by brand vendors and the replacement of traditional notebooks, detachable tablet shipments grew markedly, up by 154% from last year. Taiwan's ODM industry continued to take a share of over 80% of the total global assembly business, thanks to the support of orders from Apple, Microsoft and other leading firms. This made Taiwan the convincing champion of global ODM shipment.

In terms of vendor performance, the Top 5 ODM vendors ranked by shipments are shown below. Thanks to support from international key accounts, Foxconn was firmly in the top shipment spot. 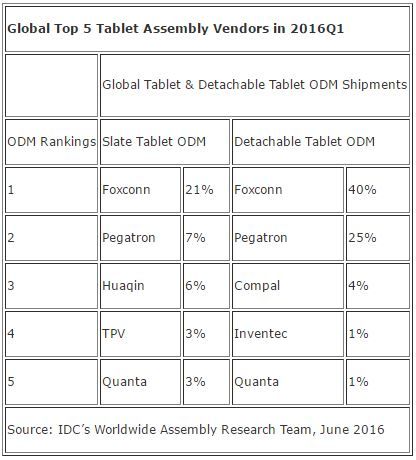 Note: Brand vendors’ in-house manufacture is not included in the table above.

In terms of product specifications, 7-inch slate tablets were still the mainstream product, accounting for 52% of the global total shipment. Rear cameras were mainly 5 megapixels, making up around 40% of the global ODM shipments. Detachable tablets of 11-inch or larger, with rear cameras mostly 8 megapixel, made up approximately 60% of ODM shipments worldwide.

According to Annabelle Hsu, Senior Research Manager at IDC, “Looking into 2016Q2, global slate tablet shipments will continue to drop slowly over time. By comparison, detachable tablet shipments are expected to grow over 30%, due to increased market demand and new models launched by vendors.”