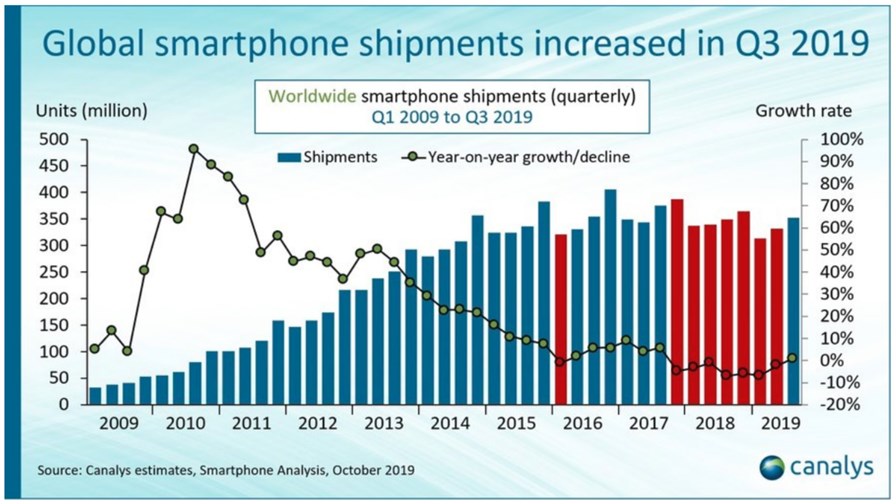 The global smartphone business has now bounced back - as widely predicted - following an extended lull ahead of 5G smartphone availability.

With the end of the month, most of the market watchers have announced their estimates.

According to Strategy Analytics, global smartphone shipments have grown by 2% annually to reach 366 million units in the third quarter of 2019 - the smartphone industry’s first period of positive growth for two years.

Samsung maintained first position with 21% global smartphone market share, Huawei rose to a record 18% (despite you know what), while Apple held on to 12% in third place.

Canalys (see chart above) has more or less the same numbers, claiming shipments grew by 1% in the third quarter. It noted that Huawei bounced back from a weak Q2, coming in after Samsung with 66.8 million units, up 29% as pent up channel demand caused a surge in the volume of shipments.

It pointed out that Apple actually experienced a 7% decline in its shipment volumes with 43.5 million units, and observed that its numbers could have been even worse had it not launched three iPhones in September, something it had never done before.

It points out that Xiaomi and Oppo are now snapping not too far from Apple’s heels, with 32.5 and 32.0 million units respectively.

Canalys sees 5G as the next big battleground for Samsung as it is one of the few smartphone vendors to design its own chipsets and modems and is not restricted to the cycle of a third party component supplier like Qualcomm. If it moves faster than Qualcomm, it reckons, it can win the race to mid-range smartphones with 5G.

With Huawei it’s been a case of ‘win some, lose some’. It may still be suffering from the US Entity List ruling, but that hasn’t stopped it actually growing its non-China business where it  increased its volumes from 21.5 million in Q2 to 25.3 million in Q3, due to a resumption in procurement which had been paused in Q2.

Meanwhile in China it has experienced what Canalys calls ‘rampant performance’ by growing 66% at the expense of its domestic rivals.

IHS Markit says the global business managed an overall marginal growth rate of 1.2% in the second quarter, the first increase since the first quarter of 2018.

It points out that one interesting facit of the turnaround is that the ‘second tier brands’, Xiaomi vivo and OPPO, stunted by the Chinese home market turning back to Huawei in what appears to be patriotic support in the face of US sanctions, have turned their attention to other markets. It points out that smartphone demand growth in India, the world’s third largest market, has led to growth of low end brands such as Realme, which has got past the million mark for the first time.