Boston, MA - August 13, 2015 – While the overall Tablet market contracts in 2015, 2-in-1 Detachable Tablets have become a bright spot. According to a new Strategy Analytics’ Tablet & Touchscreen Strategies report, traditional PC vendors like Asus, Acer, and HP have found a niche in which they can credibly compete against mobile device heavyweights, as the segment is forecast to grow 91 percent globally over the next five years due to lower prices and better designs. 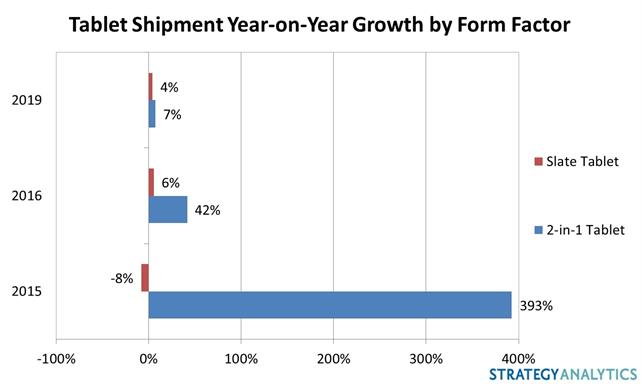 Tablet & Touchscreen Strategies Service Director Peter King said, “The timing could not be better for 2-in-1 Tablets as Windows 10 makes the multi-mode computing experience smoother, Intel’s Skylake processors hit the market at the end of 2015, and Windows Tablets have become more cost-competitive with Android Tablets. Windows provides a familiar environment for traditional PC vendors to compete in the Tablet market and also gives CIOs a higher level of comfort when considering higher-end Tablets in the commercial setting.”

Tablet & Touchscreen Strategies Senior Analyst Eric Smith added, “Vendors have refined 2-in-1 Tablet products in the last year to be affordable and functional and there is plenty of headroom for the segment to grow in the next five years as White Box vendors seek to differentiate their low-cost products. The growth rate among 2-in-1 Tablets will far outpace those of traditional Slate Tablets, though from a smaller base, as they compete for the spot of the secondary computing device in the home.”