Fifteen million UK internet users have undertaken a ‘digital detox’ in a bid to strike a healthier balance between technology and life beyond the screen, according to major new Ofcom research.

The study of 2,025 adults and 500 teenagers reveals how our reliance on the internet is affecting people’s personal and working lives, leading many to seek time away from the web to spend time with friends and family.

Ofcom’s Communications Market Report 2016 finds that one in three adult internet users (34%), equivalent to 15 million people in the UK, has sought a period of time offline, with one in ten (11%) doing so in the last week alone.

The most common reasons for taking a ‘tech timeout’ were to spend more time doing other things (cited by 44%) and more time talking to friends and family (38%).

Many people found their time offline to be a positive experience: a third (33%) said they felt more productive, 27% found it liberating, while a quarter (25%) enjoyed life more. However, 16% experienced a ‘fear of missing out’ (‘FOMO’) while on the web wagon, 15% felt lost and 14% ‘cut-off’.

Ofcom’s report shows that faster internet access is more widely available than ever before, with take-up of superfast broadband2 and 4G on the increase.

Some 71% of UK adults now own a smartphone - up from 66% a year ago - and it remains the most popular device for accessing the internet.

People are better connected than ever before, meaning they can spend more time doing what they love online – such as watching the latest on-demand series, or chatting with friends and family via instant messaging services, both of which have seen a recent surge in popularity.

Three in four internet users (75%) consider the web ‘important’ to their daily lives. Nearly eight in 10 (78%) agree it helps keep them up-to-date about current affairs and social issues, while almost two thirds (63%) credit it with inspiring them to try new things such as travel destinations, restaurants, recipes or entertainment.

Half (51%) of all internet users agreed that, because of the internet, they never feel bored, while 82% feel that communicating over the web has made life easier.

As a result of the internet’s importance in many people’s daily lives, adult users in the UK currently spend an average of one day per week (25 hours) online; 42% say they go online or check apps more than 10 times a day, while around one in 10 (11%) access the internet more than 50 times daily.

Most internet users (59%) even consider themselves ‘hooked’ on their connected device – while a third (34%) admit they find it difficult to disconnect.

Many people are, however, facing up to the consequences of spending too much time online, and recognising how this can affect their work and personal lives.

Nearly half of internet users (49%) said they were guilty of ‘connectivity creep’ – spending longer online than they originally intended each day, while 37% said the same of social media.

‘Tech tardiness’ was another reported side effect. One in five users (22%) admitted being late for a meeting with friends or family, and 13% late for work, as a result of being online too long. One quarter of teens (26%) had been late for school, while six in 10 teenagers (60%) said they’d neglected school work.

Perhaps as a consequence, many parents are limiting their children’s time online. Six out of 10 (61%) teenagers who use a connected device such as a smartphone or tablet reported being digitally ‘grounded’, having had their device taken away, or its usage restricted.5

People also reported a lack of ‘netiquette’ from strangers who can’t seem to put their devices down. A quarter of UK adults (25%) complained that someone bumped into them in the street at least once a week because they were too busy looking at their phone.

Our attachment to our connected devices is also getting in the way of face-to-face communication, according to the research.

Four in 10 UK adults (40%) felt they’d been ‘smart-snubbed’ (ignored by a friend or relative too engrossed in their smartphone or tablet) at least once a week; while 17% said this happened on a daily basis.

The research also suggests some people are choosing to text or instant message friends and family instead of talking face-to-face, even though they’re sitting in the same room. Just over a quarter of UK adults (26%) said this occurred at home, while a third of teenagers (32%) have done so at school.

“The internet has revolutionised our lives for the better. But our love affair with the web isn’t always plain surfing, and many people admit to feeling hooked.

“So millions of us are taking a fresh look at the role of technology in our lives, and going on a digital detox to get a better tech-life balance.”

Ofcom’s Communications Market Report 2016 is a comprehensive annual study of the UK’s internet, telecoms, broadcasting and postal sectors. The report acts as a reference for industry and consumers, and provides context and evidence for Ofcom’s work in making communications services work for everyone.

This year’s report shows a surge in the use of instant messaging in the UK. The proportion of adults using services such as Facebook Messenger and WhatsApp6 at least once a week rose from 28% in 2014, to 43% in 2016 – the biggest increase across all communications and media activities.

Instant messaging is also considered the single most important means of communication among 16-24 year olds.7 Photo or video messaging services, such as Snapchat, are now used by 21% of UK adults on a weekly basis, up from 14% in 2014.

Emailing and texting (SMS) remain the most common methods of text communication, at 70% and 63% respectively in a given week, but both have decreased since 2014.8

Ofcom’s Digital Day study – published as part of the Communications Market Report 2016 - shows that UK adults are spending eight hours 45 minutes on media and communications each day on average – more time than we do sleeping. 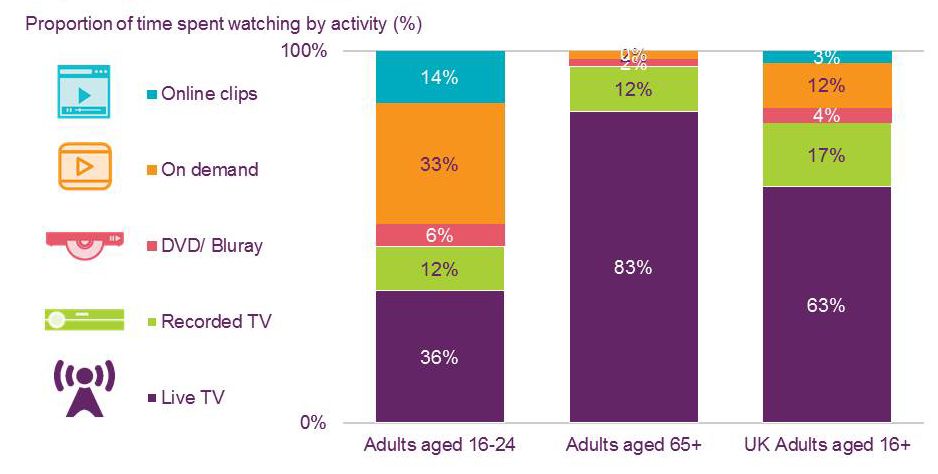 While a digital generational gap clearly exists, the report also shows that many older people are keen to keep pace with newer online and on-demand services.

2. Superfast broadband is a connection that has actual speeds of 30Mbit/s and over.

4. 4G coverage is correct as of May 2016. 71.3% of UK premises had outdoor 4G coverage from all four mobile operators in May 2016. We also report 4G take-up as measured by Ofcom consumer research in the report; this is at 48% of all adults and has grown year on year across all ages.

7. 36% of 16-24 year olds felt that instant messaging was their most important means of communication.

10. This growth is partly due to the growing popularity of data-heavy video-on-demand services, such as BBC iPlayer, Netflix and Amazon Prime Instant Video, as well as higher broadband speeds which allow more members of a household to go online simultaneously.

11. Ofcom has a guide for parents about keeping your child safe online which can be downloaded from our website; it includes advice on educating your children and setting parental controls. The UK Council for Child Internet Safety (UKCCIS) has also published a useful guide on Child Safety Online.

12. In addition to making much of the data used in the report available to access, use and share as open data at www.ofcom.org.uk/opendata, we are also launching two interactive tools to allow additional analysis of consumer research data from our tracking surveys and our Digital Day research. These will be accessible at www.ofcom.org.uk/cmr.