Confidence in IT spending is declining despite economic lockdown easing - report 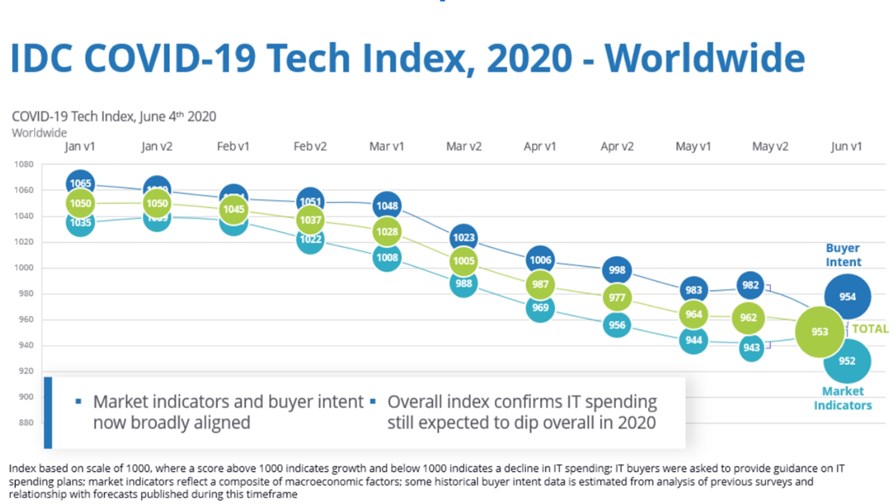 Business confidence in IT spending took a tumble in the last week of May, according to IDC’s Covd-19 Tech Index which charts how optimistic or otherwise the IT buyers in US, Europe and bits of Asia are feeling at any given moment (see chart above).

IDC points out that the confidence dip actually occurred as much of the world was “tentatively preparing” for an economic recovery phase as lockdown restrictions were lifted.  This would seem to imply that most buyers expect business - and therefore spending - conditions to actually worsen rather than improve due to either only a partial return to work, second waves of the disease setting everything  back, or recession starting to kick in (or maybe all three).

It reports that confidence levels are generally weak, especially in the US which, it says, have consistently trended down since the crisis began.

“ US firms are a little more confident about the overall economy than two weeks ago, but conversely less confident about their own IT budgets for the year as a whole. Significant spending declines are predicted for traditional technologies including PCs, peripherals, software applications, and project-oriented IT services,” IDC says.

What the chart implies

IDC’s  COVID-19 Tech Index uses a scale of 1000 to provide a directional indicator of changes in the outlook for IT spending and is updated every two weeks. The index is based partly on a global survey of enterprise IT buyers, and partly on a composite of market indicators which are calibrated with country-level analyst inputs relating to medical infection rates, social distancing, travel restrictions, public life, and government stimulus. A score above 1000 indicates that IT spending is expected to increase, while a score below 1000 points towards a likely decline.

IDC says the  recovery phase in the second half of the year will be unpredictable. The first phase of this crisis was uniformly bad for everyone, but the next chapter will be very localized and dependent on a delicate balance of medical and economic factors. Now, it points out, we have entered a phase where some companies are being forced into bankruptcy or employee reductions, which will have inevitable implications for tech spending in the second half of the year.

The IDC COVID-19 Tech Index is a leading indicator for IT Spending designed to provide rapid updates to changes in buyer sentiment and underlying market indicators. A score higher than 1000 indicates growth in IT spending, while a score below 1000 indicates a decline. Complete results from the most recent index can be found on IDC's COVID-19 microsite at https://www.idc.com/covid19.

IDC will host a special COVID-19 Tech Index webinar on June 9th at 11:00 am U.S. Eastern time. Details and registration for this webinar are available at https://bit.ly/2A1RDQ3.