Cloud services adoption to accelerate in China as economy reopens

China’s cloud infrastructure services market grew 67.0% year on year in Q1 2020, despite the disruption caused by COVID-19. According to Canalys’ latest estimates, cloud infrastructure services spending reached US$3.9 billion. China remained the world’s second largest market, accounting for 12.5% of the overall total. This compares to 10.0% in Q1 2019, highlighting the increasing pace of cloud adoption in the country as part of digital transformation projects. The top four cloud service providers collectively accounted for 81.0% of total spend in Q1 2020. Alibaba Cloud continued to dominate, commanding a share of 44.5%. Huawei Cloud and Tencent Cloud were the leading challengers, with shares of 14.1% and 13.9%. Baidu AI Cloud was the fourth largest cloud service provider, increasing its share to 8.6% after another strong quarter. The ongoing shift to cloud will accelerate as the economy regains momentum post-COVID-19 shutdown, with new digital transformation opportunities emerging, funded by Chinese government economic stimulus measures. 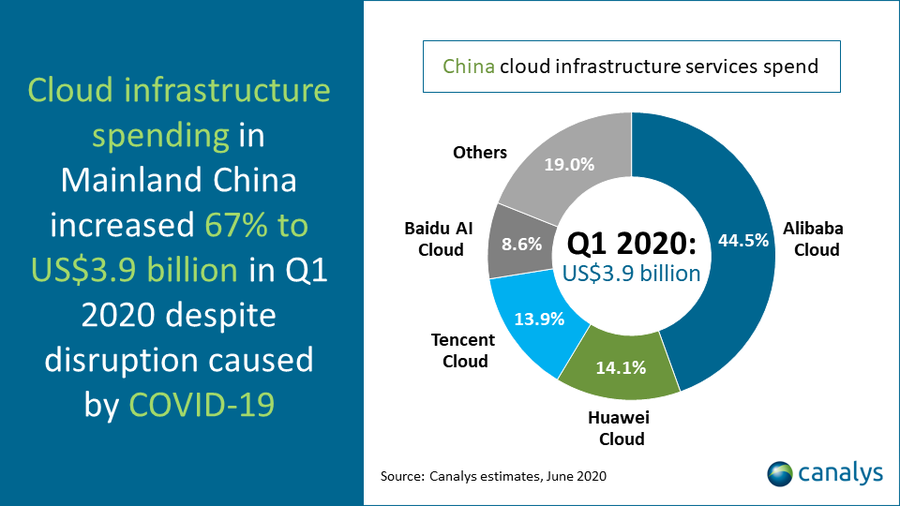 “Access to on-demand compute resources proved to be vital during the quarter as the coronavirus crisis escalated,” said Matthew Ball, Canalys Chief Analyst. “Many businesses were able to maintain operations through remote working and access to data and applications, while students continued to learn via collaboration platforms. This demonstrated the growing importance of cloud services and the central role they have played in enabling digital transformation. But some large, complex and consulting-led projects were disrupted due to workplace shutdowns, which also affected negotiations and bidding processes. But new cloud migration and cloud-native opportunities are emerging as organizations assess their response to the crisis, optimize future emergency continuity plans and develop new processes and services. Additional funding through government-led “new-infrastructure” economic stimulus measures into areas such as connectivity, healthcare, education, transport and urban areas will also drive cloud use over the next 12 months.”

China’s stimulus measures differ from those in the rest of the world by focusing investment on 5G, AI, cloud computing, electric vehicles, IoT and robotics to restructure the economy and drive growth through innovation. These opportunities will further intensify competition among the leading cloud service providers, which subsequently outlined large investment plans and technology advancements to increase their capabilities in these areas.

Alibaba Cloud announced plans to invest CNY200 billion (US$28 billion) over the next three years to enhance its cloud software and hardware. It benefited from the surge in users collaborating on its DingTalk platform during lockdown, which peaked at 155 million daily average users. It now has over 100 million following the re-opening of offices and schools. Huawei Cloud has built its strength on establishing DevOps and industry-focused platforms as well as winning large government contracts. It reported increased penetration with Internet and video content providers, as well as rapid growth in its Cloud Phone and ModelArts solutions. Tencent Cloud unveiled plans to invest CNY500 billion (US$70 billion) to expand its AI, blockchain, cloud and cybersecurity capabilities over the next five years. Tencent Meeting use also surged during lockdown. Baidu AI Cloud will benefit from the economic stimulus measures. It has emerged as a key provider in China, focusing on enabling digital transformation with AI. It maintained its momentum in Q1 2020 and continued to outpace the market, winning deals incorporating facial recognition and its recently launched AI PaaS.