FRAMINGHAM, Mass., September 27, 2018 – According to the International Data Corporation (IDC) Worldwide Quarterly Cloud IT Infrastructure Tracker, vendor revenue from sales of infrastructure products (server, enterprise storage, and Ethernet switch) for cloud IT, including public and private cloud, grew 48.4% year over year in the second quarter of 2018 (2Q18), reaching $15.4 billion. IDC also raised its forecast for total spending (vendor recognized revenue plus channel revenue) on cloud IT infrastructure in 2018 to $62.2 billion with year-over-year growth of 31.1%.

The combined public and private cloud revenues accounted for 48.5% of the total worldwide IT infrastructure spending in 2Q18, up from 43.5% a year ago and will account for 46.6% of the total worldwide IT infrastructure spending for the full year. Spending in all technology segments in cloud IT environments is forecast to grow by double digits in 2018. Compute platforms will be the fastest growing at 46.6%, while spending on Ethernet switches and storage platforms will grow 18.0% and 19.2% year over year in 2018, respectively. Investments in all three technologies will increase across all cloud deployment models – public cloud, private cloud off-premises, and private cloud on-premises.

"As share of cloud environments in the overall spending on IT infrastructure continues to climb and approaches 50%, it is evident that cloud, which once used to be an emerging sector of the IT infrastructure industry, is now the norm. One of the tasks for enterprises now is not only to decide on what cloud resources to use but, actually, how to manage multiple cloud resources," said Natalya Yezhkova, research director, IT Infrastructure and Platforms. "End users' ability to utilize multi-cloud resources is an important driver of further proliferation for both public and private cloud environments."

All regions grew their cloud IT Infrastructure revenue by double digits in 2Q18. Asia/Pacific (excluding Japan) (APeJ) grew revenue the fastest, by 78.5% year over year. Within APeJ, China's cloud IT revenue almost doubled year over year, growing at 96.4%, while the rest of Asia/Pacific (excluding Japan and China) grew 50.4%. Other regions among the fastest growing in 2Q18 included Latin America (47.4%), USA (44.9%), and Japan (35.8%). 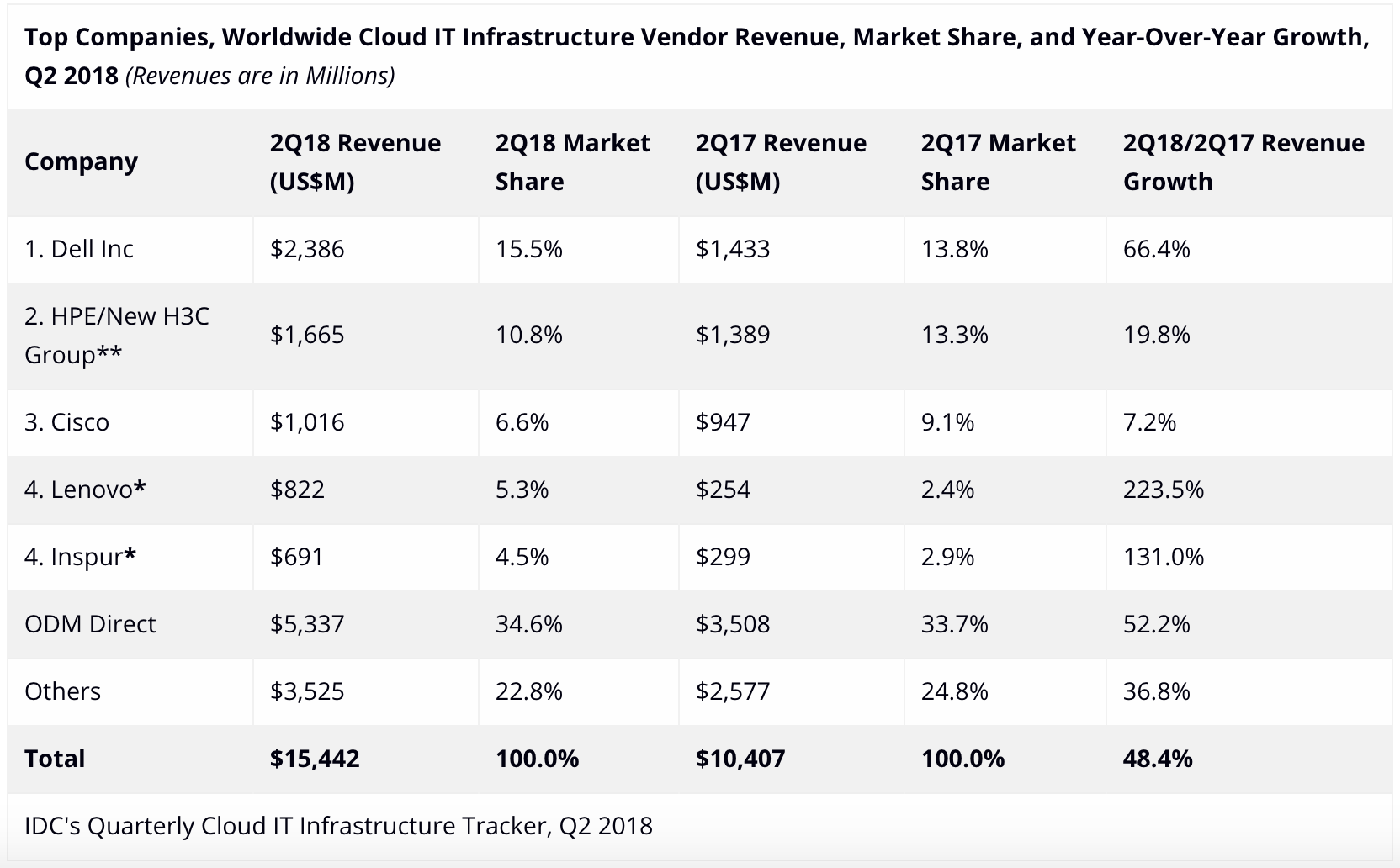 *IDC declares a statistical tie in the worldwide cloud IT infrastructure market when there is a difference of one percent or less in the vendor revenue shares among two or more vendors.

**Due to the existing joint venture between HPE and the New H3C Group, IDC will be reporting external market share on a global level for HPE as "HPE/New H3C Group" starting from Q2 2016 and going forward.

Long-term, IDC expects spending on cloud IT infrastructure to grow at a five-year compound annual growth rate (CAGR) of 11.2%, reaching $82.9 billion in 2022, and accounting for 56.0% of total IT infrastructure spend. Public cloud datacenters will account for 66.0% of this amount, growing at an 11.3% CAGR. Spending on private cloud infrastructure will grow at a CAGR of 12.0%.